New reports based on an investigation that CWA conducted of AT&T facilities in the Midwest serviced by CWA members show that despite making promises to create jobs and invest in rural communities, AT&T is cutting jobs and neglecting rural network improvements.

"AT&T has turned its back on rural and suburban communities in the Midwest by eliminating jobs, advocating for deregulation, and cutting investments in these areas," said Linda L. Hinton, Vice President of CWA District 4. "We will not stand idly by while AT&T receives billions in tax benefits but turns a blind eye to our nation's crumbling infrastructure. It's time for AT&T to provide answers about where all that extra income is going."

In many rural communities, AT&T voice service is a lifeline for customers, yet in large parts of the states examined by CWA, AT&T has not upgraded its copper network to fiber to better serve customers. Across the Midwest, AT&T copper cable—for many the only source of landline phone and internet—is significantly damaged, creating service problems for customers and public safety hazards. Despite the clear need for an updated telecommunications network, AT&T continues to cut jobs and close call centers, devastating families and upending lives.

In Ohio, customers have filed numerous complaints with the Public Utilities Commission of Ohio (PUCO) regarding various service issues. Records obtained by CWA show that since 2016, PUCO received more than 6,000 informal complaints from AT&T customers relating to such issues. CWA is also filing a complaint with PUCO—based on evidence in the new Ohio report—calling for an investigation into the adequacy and reliability of service provided by AT&T.

Because of the lack of public oversight, CWA is encouraging AT&T customers in the Midwest to share information about internet and phone service issues on a new website, ATTBrokenPromises.org/ServiceQuality, so that elected leaders can better understand the problems that their constituents are facing and hold the AT&T accountable for its deteriorating network.

Read each of the new reports here:

AT&T copper cable—for many the only source of landline phone and Internet—is significantly damaged, creating service problems for customers and public safety hazards.

AT&T CEO Randall Stephenson was one of the biggest cheerleaders for the Tax Cuts and Jobs Act of 2017, promising to create 7,000 new, good-paying jobs. AT&T received a $21 billion windfall from the tax bill. But since the tax law has gone into effect, AT&T has eliminated more than 23,000 jobs and relocated thousands of others far away from their families and communities.

Darren Kelly, an AT&T premises technician and CWA member, shared his story on CalMatters of how in May, AT&T told 368 technicians throughout California, including him and many of his coworkers in Sacramento, that they needed to move to the San Francisco Bay Area or lose their jobs. 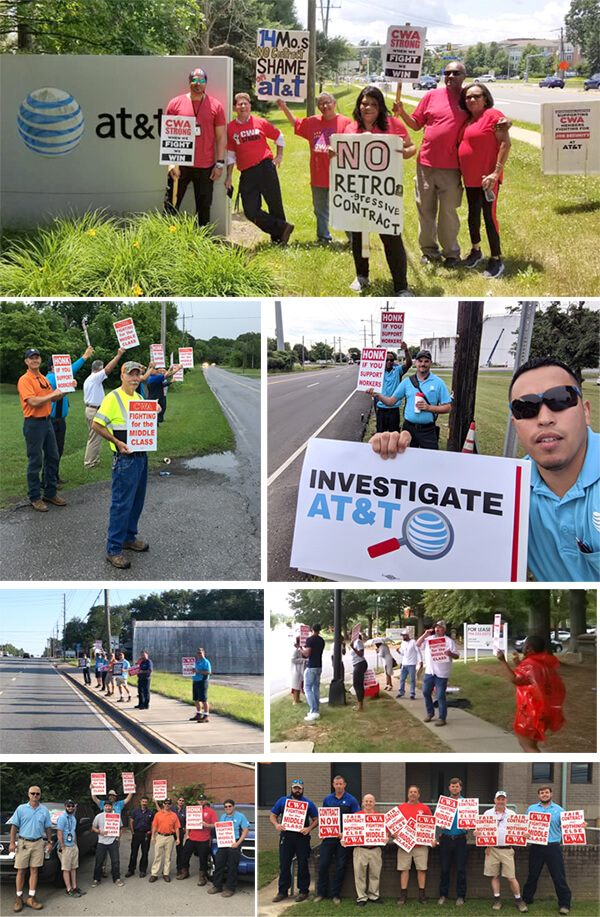 CWA members across the country are escalating their efforts to show AT&T that they are ready to do whatever it takes to get fair contracts at AT&T Midwest, AT&T Legacy T, AT&T Puerto Rico, and AT&T Southeast that keep good union jobs in our communities.

New York Attorney General Letitia James and a group of attorneys general from nine states and the District of Columbia issued an antitrust complaint this week to block the proposed T-Mobile/Sprint merger, with James calling it "exactly the sort of consumer-harming, job-killing megamerger our antitrust laws were designed to prevent." This is a critical step towards stopping these two corporate giants from gaining excessive market power at the expense of workers, customers, and communities.

CWA has been a leading opponent of the deal and has kept concerns about job loss and lower wages in the wireless industry at the center of the discussion.

CWA District 1 Vice President Dennis Trainor joined James for the announcement of the antitrust action. The merger "would mean less demand for the labor of wireless workers, driving down wages and benefits across the industry," Trainor said. "T-Mobile and Sprint also have a long history of interfering with their workers' freedom to join a union. Without collective bargaining, T-Mobile and Sprint workers have virtually no capacity to protect themselves from the negative impact of this merger."

Analysis from CWA has shown that the merger would mean 30,000 lost jobs across the country, higher prices for consumers, and would not improve rural broadband coverage. CWA has launched a website with information about the effects of the merger, including detailed state-by-state information about job loss. 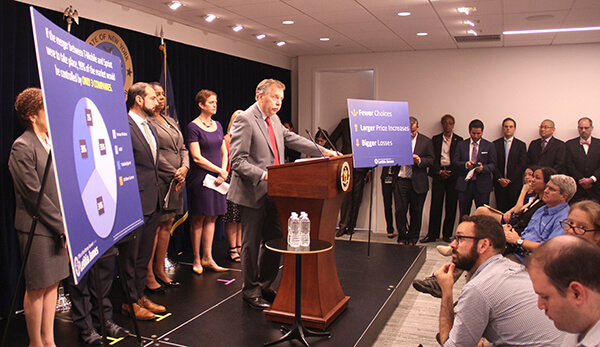 CWA District 1 Vice President Dennis Trainor (center) joined James for the announcement of the antitrust action. The merger "would mean less demand for the labor of wireless workers, driving down wages and benefits across the industry," Trainor said.

New Federal Bill Would Crack Down on Call Center Offshoring

New legislation introduced this week by Senator Bob Casey (D-Pa.), in the U.S. Senate and the bipartisan duo of Reps. David McKinley (R-W.Va.) and Mark Pocan (D-Wis.) in the House would help crack down on companies for offshoring call center jobs. The U.S. Call Center Worker and Consumer Protection Act (S.1792 and H.R. 3219) would ensure that taxpayer dollars are not rewarding companies that offshore their customer service work and would give consumers the power to decide where to have their calls handled.

The new federal call center bill builds on the momentum generated by CWA members across the country as they pushed states to introduce, move forward, and pass legislation addressing issues around call center offshoring during the 2019 legislative session in both Democratic and Republican-controlled state legislatures.

"As we've seen in states across the country, there is growing and bipartisan momentum to address offshoring in the call center industry and to stand up to companies intent on shipping good jobs overseas without accountability," said Shane Larson, CWA's Director of Legislation, Politics and International Affairs.

With the New Jersey government at risk for a shutdown for the third year in a row if a budget agreement isn't reached by June 30, CWA members are fighting for passage of a fair budget that will benefit all New Jerseyans.

There are currently two very different possibilities for this year's budget on the table. Governor Murphy's proposed budget asks millionaires to pay their fair share of taxes so that the state can invest in public education and services and fund public worker pensions and the state employee contract. N.J. State Senator Stephen Sweeney's plan, however, would end the current pension system for state, county, and municipal government employees and shift healthcare costs onto workers, all while protecting billions of dollars of tax cuts for corporations and the super-rich.

CWA members have been going all out to fight for Governor Murphy's plan to protect workers, making hundreds of phone calls to legislators asking them to stand with the governor, and holding a rally today at the Statehouse Annex in Trenton in support of Murphy's plan.

CWA members are fighting for passage of a fair budget that will benefit all New Jerseyans.

In comments submitted to the Federal Communications Commission this week, CWA joined more than 60 organizations – including the ACLU, Common Cause, NAACP, and The Leadership Conference – to oppose a new proposal to cap the Universal Service Fund, which supports programs like Lifeline and the Connect America Fund to make broadband service more affordable and accessible to lower-income families.

"When Congress codified the concept of universal service by enacting the Telecommunications Act of 1996, it called for the creation of different programs tailored to promote affordable communications services for those most in need, from students, library patrons, and rural hospitals to low-income and rural communities," CWA and the other groups said in the comments. "Grouped under a single umbrella of the Universal Service Fund, these programs are intended to work in concert to address the 'digital divide' and ensure that all consumers have access to high-quality and affordable communications."