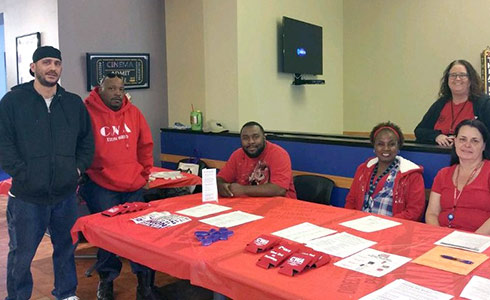 In challenging times for our union, CWA Local 6327 is accomplishing big things.

The local has been ramping up its efforts on internal organizing. Every other Thursday, DIRECTV CWAers in Tulsa hold a CWA Red Union Day, talking to and signing up new members. In just the last two months, they've signed up well over 100 new members!

"We are strengthening our union by signing up new members and getting people involved in improving their workplace and lives, and we're having fun doing it," said Local 6327 President and at-large member of CWA's Executive Board Anetra Session. "People are not only signing up, but they're also coming to us eager to get engaged right away. They see their CWA coworkers in action, wearing red, and they want to be part of what we’re doing."

Session says that issues like the House Republicans' vote to repeal the Affordable Care Act (ACA) are on workers' minds as they get involved with the local. There’s been an influx of new members joining the local's legislative committee and signing up to become stewards and activists.

"Through direct conversations with coworkers, we’re organizing to become stronger in our collective bargaining and on legislative issues that directly affect us, our families, and our communities."

The local is planning mobilizing events as well as organizing trainings in the coming weeks.