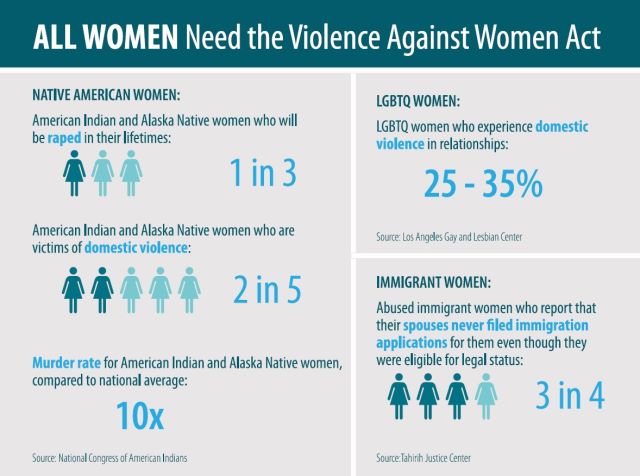 A lot of big things got lost in the run up to the “fiscal cliff.” For example, the House of Representatives just ran out of time to help victims of Hurricane Sandy. Maybe in a couple weeks the House can vote on the bill the Senate already passed, then send it back to the new Senate. Maybe.

Equally shameful is the House’s inaction that ended the 18 years of protection women have had against domestic violence and other assault, through the Violence Against Women Act.

This was yet another example of rightwing ideology trumping common sense. It seems that some Republicans didn’t think that immigrant women or Native American women who are victimized by non-Native Americans or others deserve protection from violence. So the House refused to act on the bill passed by the Senate last year, by a 68-31 vote. And today, no women have protection.

A small group of Republican members of Congress – a whopping 10 – wrote to their leadership, calling for a vote on the bill. That went nowhere.

Stay tuned. We’ll see if the new House of Representatives gets it.