CWA Local 1298 members voted overwhelmingly last week to authorize a strike at Frontier if necessary, sending a loud and clear message to the company that its workers are united and willing to do what it takes to reach a fair and equitable contract. The bargaining committee is meeting daily with Frontier to continue working towards an agreement. The current contract expires on October 14.

AT&T is Abandoning Puerto Rico and the U.S. Virgin Islands

Just weeks after billionaire CEO Paul Singer’s Elliott Management Corporation announced that it had acquired about 1% of AT&T and laid out plans to extract profits from the company by cutting jobs and selling off critical assets, AT&T announced its intention to sell off wireless and wireline operations in Puerto Rico and the U.S. Virgin Islands to Liberty Latin America, a company with a history of union-busting and job cuts.

“AT&T workers in Puerto Rico and the Virgin Islands have fought hard to keep good, family-supporting jobs in their communities,” said Richard Honeycutt, Vice President of Communications Workers of America District 3. “Thanks to workers’ dedication and solidarity during recent contract negotiations, AT&T guaranteed that customer calls would continue to be handled in Puerto Rico. Now, all of that is in jeopardy, and it’s only the tip of the iceberg. Elliott Management’s plan to sell off AT&T’s assets puts all of the company’s employees and customers at risk, especially those in rural and suburban areas of the United States.”

AT&T workers in Puerto Rico and the Virgin Islands played a critical role in making sure people could reach their loved ones in the wake of Hurricane Maria. Now, instead of doing the right thing by acknowledging workers’ dedication and investing in American jobs, AT&T is doing a billionaire’s bidding by putting its workers on the chopping block and abandoning these communities. 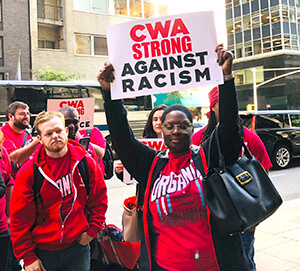 "Racism was rampant at the Verizon Wireless store where I worked, and the company is complicit because management's indifference allowed it to continue," said Martin Hopkins, a former Verizon Wireless employee who is filing an EEOC complaint over being terminated after enduring years of racist treatment by customers and management at a retail store in Lancaster, Ohio. "Verizon Wireless executives need to take responsibility and make it clear they will not tolerate toxic work environments where racial discrimination can thrive."

A growing number of Verizon employees around the country are coming forward with experiences of racial discrimination at Verizon Wireless stores and call centers, with recent allegations and EEOC complaints at a call center in Irving, Texas, and a retail location in Columbus, Ga.

"Verizon Wireless executives should be ashamed for their failure to condemn racist acts by management," said Jennifer Womack, a Verizon call center worker who has spoken out about racial discrimination and retaliation at her center in Irving. "At my call center specifically, the company needs to do more to protect workers from retaliation. Management violates our rights by trying to prevent us from organizing and making our voices heard, through anti-union meetings and surveillance. The workers who help make Verizon Wireless successful as a company deserve more respect."

"Verizon Wireless workers around the country, including here in New York, stand with Martin and Jennifer and every other Verizon employee who has experienced racism at the company and seen nothing done about it," said Monique Murphy, a Brooklyn-based VZW store employee. "We are fortunate at my store because we have a union, which helps empower us to stand up and address issues in the workplace. If Verizon took these issues of racial discrimination seriously, then they would listen to workers who are brave enough to speak out." 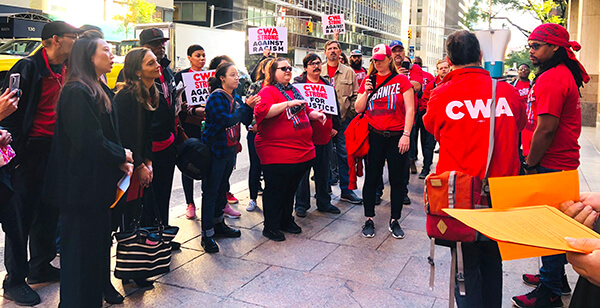 Verizon Wireless workers and elected leaders rallied outside the Verizon Wireless store on Wall Street to protest and deliver a 15,000-signature petition calling on Verizon to address issues of racism reported by workers around the country. 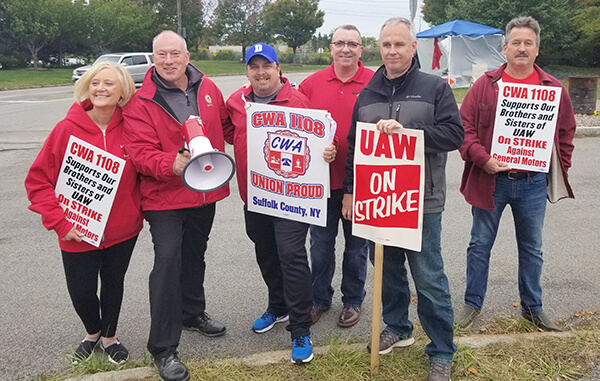 Striking UAW members at General Motors are still holding the line, and we're out there standing with them! CWA Local 1108 made the trip to Rochester to show their support and tell GM that the labor world is behind our UAW family.

No One Should Be Fired for Being Themselves at Work 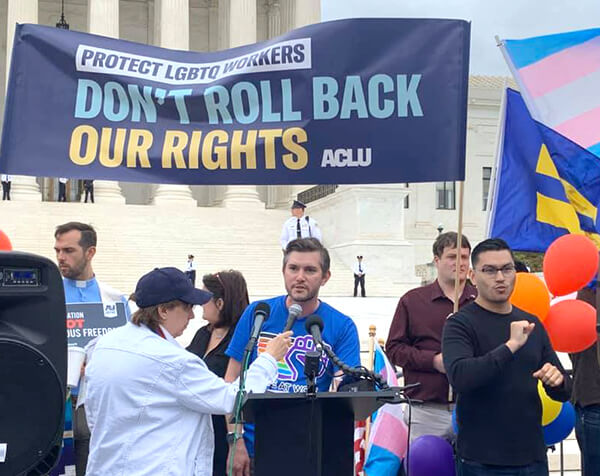 As the Supreme Court prepared to hear arguments Tuesday in three cases in which the Trump administration is urging the court to rule that it's legal to fire workers based on their sexual orientation or gender identity, CWAers rallied on the Supreme Court steps to show solidarity for the workers and to tell the court that no one should be fired for being themselves at work. Watch NewsGuild-CWA member and Pride at Work co-president Gabe González speak at the rally here.

Marge Krueger, center, CWA Director of Airline Passenger Service, was honored this week as the Allegheny County Pennsylvania Central Labor Council Woman of the Year at the Council's annual dinner. CWAers from across the country, including District 2-13 Vice President Ed Mooney and District 4 Vice President Linda Hinton attended the event. In her remarks, Kruger noted that helping working people overcome the obstacles to joining together to form a union is difficult, but that it is "the most rewarding job in the union."

Save the Date: PRO Act Day of Action

On Wednesday, October 16, CWA members will be making a huge push to pass the Protecting the Right to Organize (PRO) Act (H.R. 2474), historic legislation that will help put power in the hands of workers and reverse decades of legislation meant to crush unions.