Morton Bahr, who led CWA during the most turbulent years of the communications industry and made the union a powerful force for working people, died earlier this week at age 93.

Bahr was elected CWA president in 1985, serving in that position for 20 years. He successfully led CWA through the turbulent technological and structural revolution that transformed telecommunications. His vision ensured that the union would continue as an effective advocate for working men and women long into the future, across communications, information technology, and other sectors.

At this week's CWA Convention, CWA President Chris Shelton paid tribute to Bahr. "Not only CWA members, but the entire labor movement, lost a giant last night. Morty was comfortable whether he was in the company of Presidents of the United States, in the halls of Congress, or on a picket line," Shelton said. "He was not only a great president but he was a member's president. Morty loved fighting alongside members in organizing drives and on the picket line almost more than anything that he did as president of this union. He will be sorely missed."

Those wishing to share condolences and memories of President Bahr may do so here. Submissions will be shared with his family. 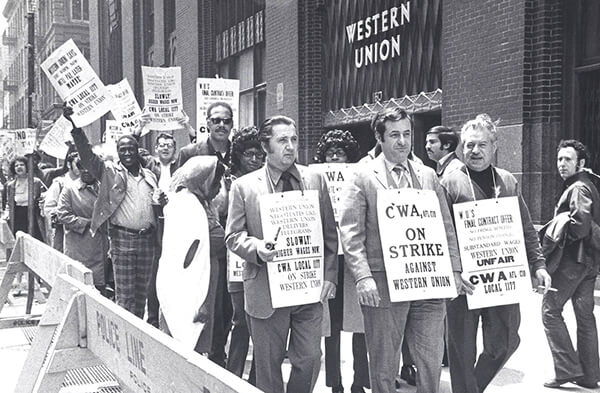 Bahr (front) successfully led CWA through the turbulent technological and structural revolution that transformed telecommunications, and made the union a powerful force for working people.

President Shelton: We Must Focus Our Anger on the 1%, Not on Each Other 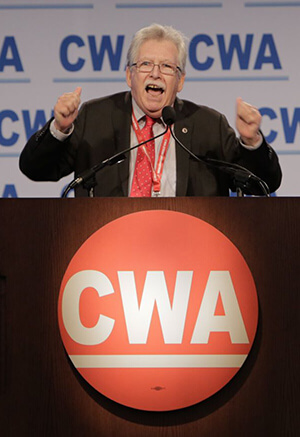 In his keynote address, President Shelton outlined the three challenges facing CWA today: overcoming the divisions which split the unity of the working class, building workplace power and strengthening the union, and electing a pro-worker government in November 2020.

At the 2019 CWA Convention in Las Vegas, CWA members from every sector and district came together to discuss and make decisions about the union's future and how to make CWA STRONG, held national and district elections, recognized locals for their organizing accomplishments, and much more.

In his keynote address, CWA President Chris Shelton outlined the three key challenges facing CWA today: overcoming the divisions which split the unity of the working class, building workplace power and strengthening the union, and electing a pro-worker government in November 2020.

Shelton also rebuked President Trump for trying to turn working people against each other with his racist taunts of Democratic congresswomen of color, and made it clear that CWA will take a strong stand against racism and hatred.

"When we allow ourselves to be divided, we become weaker just when we most need our united power to protect the working class," said Shelton. "Who is to blame then, for our stagnant wages, our vanishing jobs, and our crumbling communities? It's not other working people, no matter where they come from or how they got here. It's the billionaires, the banks, and the corporations, and their policies that crush the hopes of those struggling to realize the American dream. Our job is to focus our anger on the 1% and fight for our fair share of the wealth — not be diverted into fighting for crumbs amongst the 99%."

After Shelton's speech, many CWA delegates stood up and showed their support in front of the stage, carrying signs that said "CWA STRONG Against Racism," and "CWA STRONG for Justice."

Read Shelton's full remarks and watch a video of the speech here. 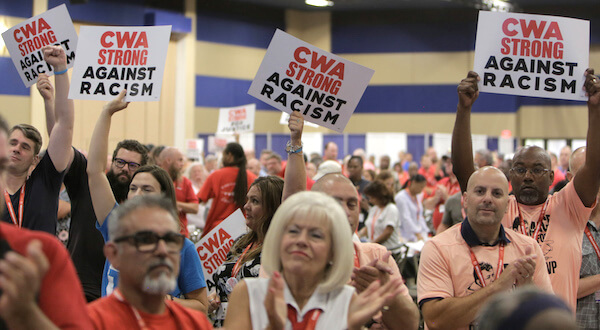 Above: CWA Convention Delegates showed their support for overcoming the divisions which split the unity of the working class during President Shelton's convention speech.

Below: At the 2019 CWA Convention in Las Vegas, CWA members from every sector and district came together to discuss and make decisions about the union's future and how to make CWA STRONG, held national and district elections, recognized locals for their organizing accomplishments, and much more. 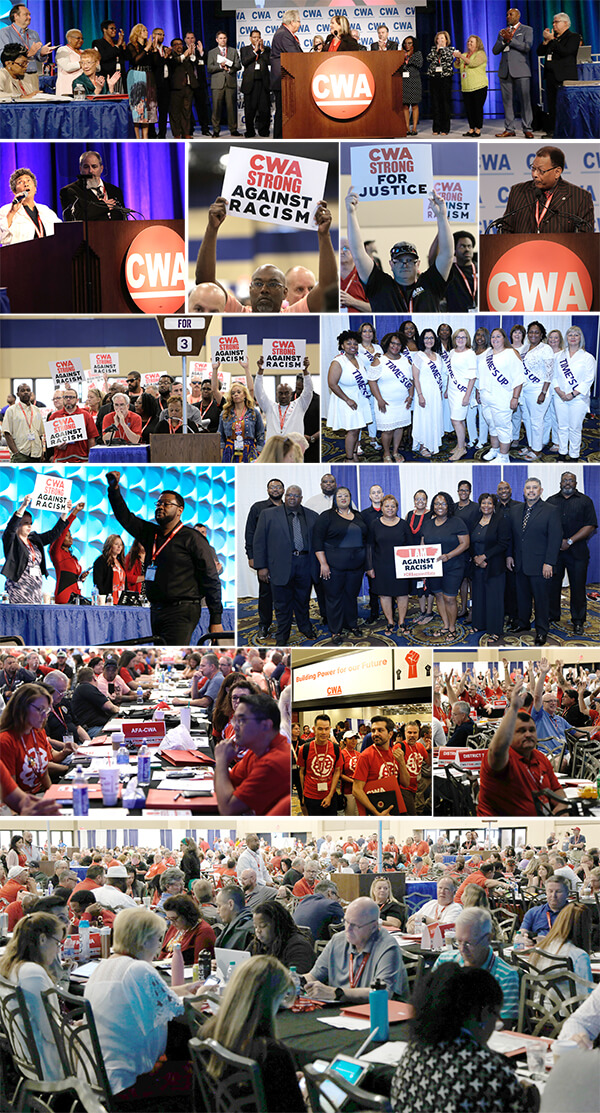 At the 2019 CWA Convention, delegates re-elected CWA President Christopher Shelton and Secretary-Treasurer Sara Steffens. Elections were also held for sector and district Vice President positions, along with elections for at-large diversity members of the Executive Board.

View all of the election results here.

In her speech to the 2019 CWA Convention on Monday, CWA Secretary-Treasurer Sara Steffens told delegates how the union has withstood anti-labor attacks including the Janus case, and emphasized that CWA must not only defend, but also must take advantage of the current opportunities to grow and flourish.

"We are in an unprecedented moment of opportunity," Steffens said. "Workers haven't been this mobilized in decades. Young people's support for unions has reached an all-time high – in fact, the fastest growing segment of our labor movement is workers younger than 35. More than two thirds of those ages 18-29 support unions. Let's not miss the moment. We need to go big and bold while we can. The future is ours to build. Let's leave this convention ready to tackle the hard work of making real change." 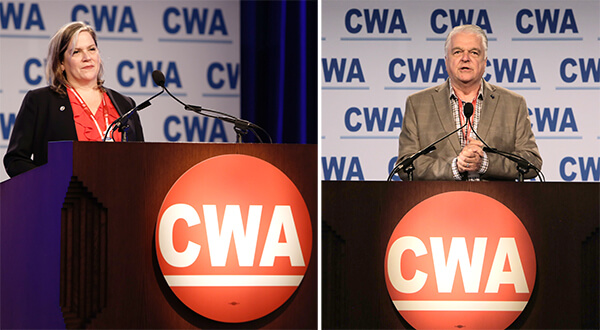 Left: CWA Secretary-Treasurer Sara Steffens emphasized in her speech to delegates that CWA must take advantage of current opportunities to grow and flourish.

Right: Delegates heard from Nevada Governor Steve Sisolak, who has been a champion for working people and for CWA members since being elected in 2018. Last month, when AT&T's lobbyists fought hard against the CWA-supported Nevada bill to protect call call center jobs and applied pressure on state legislators to try to weaken it, Sisolak helped keep the bill from being watered down and signed it into law.

Resolutions Approved by the 2019 CWA Convention

CWA delegates approved the following resolutions at the 2019 CWA Convention:

Resolution #77A-19-7 - Censuring President Trump for Racist Attacks on Congresswomen of Color - CWA delegates voted to condemn the divisive, racist "send them back, love it or leave it" rhetoric of the President of the United States and to call on other unions, community organizations, legislative bodies, and individuals to issue similar calls for the President to end this rhetoric, on his own part and among his supporters, especially the President's Republican colleagues.

Resolution #77A-19-1 - Funding our Fight for the Future - CWA delegates voted to rebalance income allocations to effectively build our union.

Resolution # 77A-19-2 - CWA STRONG - CWA leaders and members resolved to renew our commitment and rededicate ourselves to building our union ever stronger by working to make continued progress on all CWA STRONG goals.

Resolution #77A-19-3 - Strengthening CWA with a Stewards Strong Campaign - CWA delegates voted for a resolution to launch the CWA Stewards Strong campaign, which will redefine the role of the steward with a focus on building worker power and generating pressure on employers to address the workplace needs of our members. CWA will also help locals expand and strengthen their steward structures.

Resolution #77A-19-4 - Tax Reform to Promote Fairness, Good Jobs, and Public Service - CWA delegates voted to support tax policies that require corporations and the wealthy to pay their fair share in order to provide adequate revenue to support public programs that benefit the working class, provide vital government services that serve our communities, and support good jobs for public employees. Delegates called on Congress to reverse offshoring incentives included in the 2017 Tax Cuts and Jobs Act, to tax Wall Street speculation, and to investigate the promises of job creation made by AT&T and other companies to get the tax bill passed.

Resolution #77A-19-5 - Workers' Rights and Labor Law Reform - CWA delegates voted to hold elected officials accountable to working people by mobilizing to elect federal, state, and local candidates in the 2020 elections and beyond who are committed to the fight for organizing and collective bargaining rights. They also resolved to continue to push for real labor law reform, one that guarantees collective bargaining for everyone.

Resolution #77A-19-6 - International Worker Solidarity - CWA delegates voted to repudiate efforts to demonize and scapegoat workers outside the United States who are not our enemy and who are being exploited by the same employers. CWA understands we are stronger when we have allies around the globe who are ready to fight alongside us in our moments of need, to expose injustice, protect jobs, and shore up hard-won contractual rights. They resolved to support global organizing efforts.

Delegates also approved changes to the CWA Constitution to consolidate the Printing, Publishing, and Media Workers Sector into the CWA Districts' administrative structures and shorten the time-frame for appeal of a local charter revocation.

Since the last CWA convention, CWA locals from around the country have brought in over 4,500 new members through external organizing campaigns. At the 2019 CWA Convention, locals received organizing awards in honor of their extraordinary work.

The Hat Award for outstanding achievements in organizing is named for CWA's founding president, Joe Beirne, and is CWA's highest honor. This year, CWA President Chris Shelton presented the Hat Award to the NewsGuild's Organizing Committee for their outstanding work in helping thousands of workers gain a union voice in the news industry, and to Tennessee United Campus Workers-CWA Local 3865 President Ed McDaniel, who has helped workers build a fighting union of more than 2,200 members working at every single public college campus across Tennessee.

Shelton presented a new organizing award this year, named "The Morton Bahr CWA STRONG Award" in honor of the former CWA President's vision, tenacity, and union building, to the presidents of New Jersey State Workers CWA Locals 1031, 1032, 1033, 1036, 1037, 1038, and 1040 for their tireless work fighting back against anti-union attacks and electing a strong CWA ally in Governor Phil Murphy. As he presented the award, Shelton noted how Morty always embraced mobilization and political action to secure the best for our members.

In addition to the organizing awards, locals were recognized for their support for CWA's Political Action Fund and for fund-raising on behalf of the Pediatric AIDS Foundation.

Congratulations to all the winners!

At the 2019 CWA Convention, locals received organizing awards in honor of their extraordinary work.

Members of UPTE-CWA Local 9119 at the University of California reached a five-year Tentative Agreement (TA) for Healthcare (HX), Research (RX), and Technical (TX) Professionals Units. The agreement contains only improvements, and no givebacks compared to the previous contract. The agreement would not have been possible without UPTE-CWA members' hard work and sacrifice as thousands of UPTE members went on strike for the first time.

Members of UPTE-CWA stood strong through a tough fight, showing UC that they were united for a fair contract.

CWA President Chris Shelton issued a statement in response to the reported divestiture deal with DISH as part of the T-Mobile/Sprint merger, pointing out that the mega-merger is still bad news for working people.

"The T-Mobile/Sprint merger remains harmful to workers and consumers – it is anti-competitive and will kill 30,000 jobs," said Shelton. "The announced divestiture deal with DISH does not save these jobs and does not remedy the fundamental, anti-competitive nature of the merger. In fact, through the announced divestiture deal with DISH, T-Mobile is creating its largest customer, not a new competitor."

Thirteen states and the District of Columbia have recognized the anti-competitive nature of the merger and concerns raised by CWA and other merger opponents, and have sued to block the merger. Shelton said it is critical for the state lawsuit to proceed. "The state attorneys general are doing what the Justice Department will not – protecting workers and consumers from the job loss and higher prices that will result from this merger," Shelton said.