We are CWA Strong 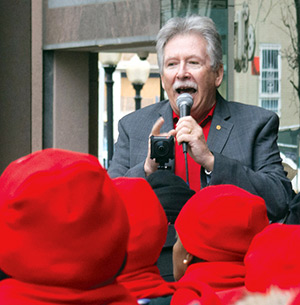 Ever since I was elected president of our great union, I’ve talked about the importance of CWA members standing together. I’m proud that we’re a union where every member has every other member’s back. That solidarity and strength is about to be tested, but I have no doubt that we’re up to this challenge.

2017 could be one of the most dangerous years in CWA’s history. Safeguards for working people are being attacked, from safety and health regulations to overtime pay. The basic right of working people to organize and bargain a contract is being threatened by members of Congress doing the bidding of the U.S. Chamber of Commerce and other corporate groups. Wall Street and bank regulations put in place to prevent another economic collapse like we experienced during the Great Recession in the late 2000s are being dismantled.

Right to work (for less) has been discredited by economists, but that hasn’t stopped Republicans in the House of Representatives from introducing a national right to work law that would weaken our bargaining rights. Public workers have had the right to bargain for nearly half a century, but a legal challenge set to come before the U.S. Supreme Court later this year or next threatens the right of public workers to a union voice on the job.

Missouri and Kentucky passed right to work (for less) laws this year, instigated by corporate backers, and Iowa wants to drastically restrict bargaining for public workers. It’s just the start of such attacks on workers’ bargaining rights.

2017 could be a dangerous year. But it also could be a year of extraordinary accomplishment by CWA members. It could be the year that more of us than ever before engage in resisting rollbacks in our contracts and rights and fighting for the good jobs and good benefits we deserve.

In this issue of the CWA News, we’re rolling out "CWA STRONG," a plan to build an even stronger union with members united to protect our jobs, wages, benefits and retirement.

CWA STRONG is a challenge to all of us, to create a shared understanding of the forces targeting our jobs, living standards and rights, and to reinforce the power and strength of our unity and solidarity so that we can continue to protect our contracts and rights on the job.

Our opponents are powerful and wealthy. This is an "all hands on deck" moment with no room for bystanders.

We know how to do this. We are a tough bunch.

CWA members have stayed on the picket line one day longer and one day stronger than management ever expected at Verizon, at FairPoint, at Momentive. We’ve mobilized for tough contract fights. We have stopped contracting out and brought back jobs sent overseas. We led the fight to stop the Trans Pacific Partnership (TPP), a trade deal that would have given U.S workers a raw deal and cost U.S. workers millions of jobs over time.

We‘ve faced challenging times and powerful opponents before. Decades ago, we faced the upheaval of telecom divestiture. Today, we’re up against mergers that combine communications companies and content companies, the consolidation of airlines, deregulation of our industries, the corporate demand for offshoring and more.

As members, we know the value of a STRONG CWA and each of us must make sure that every co-worker at every workplace knows that as well.

Our work is cut out for us, but we are up to it. Make no mistake about it. We are CWA STRONG.