For 85 years, corporate special interests have spent billions to deploy an army of lobbyists and lawyers to orchestrate a relentless campaign to disempower working people. Workers’ rights have been totally gutted, and too often, legislators from both parties have enabled this effort.

The pandemic has shown just how bad things have gotten for working people, and how comfortable some of the most powerful, out-of-touch politicians have become ignoring our demands.

“It’s time for us all to fight to build power for workers in the U.S. economy. CWA members will be on the front lines pushing federal policymakers to enact meaningful, transformative workers’ rights reforms,” said CWA Local 3176 member Jerikah Hall.

With the new Biden administration and the proworker elected officials in the Senate and House that CWA members worked hard to elect – like Senators Ossoff and Warnock in Georgia – we finally have a chance to pass the Protecting the Right to Organize (PRO) Act to tip the balance back towards working people for years to come. 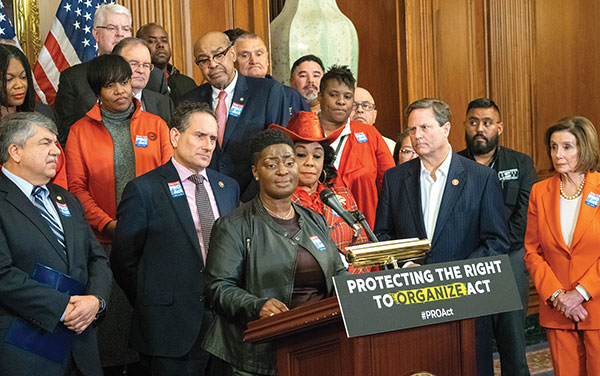 CWA members have worked tirelessly to build support for the Protecting the Right to Organize (PRO) Act, including Jennifer Womack (center), who is seen here at a press briefing hosted by House Speaker Nancy Pelosi in early February 2020.

The PRO Act would be a game-changer for millions of workers by making it easier for them to join together in unions and win first contract agreements.

We know that it won’t be easy. The expensive professional union-busters hired by big corporations with unlimited financial resources will spread misinformation and use every dirty trick they possibly can against us in this fight. But CWA members, who are used to fighting the toughest battles against corporate interests every single day, know this: when millions of workers stand together, union busters will be exposed and defeated.

Every CWA member must be prepared to flood congressional offices with phone calls and do every single thing within their power to make the PRO Act the law of the land. If we all do our part, we can – and will – win.

The PRO Act would:

Currently, there is no federal law that protects the freedom of state and local public service workers to join a union and collectively bargain. As public sector workers have organized in states and localities across the country, increasing the number of public sector workers belonging to a union, corporate executives and anti-union ideologues have focused their resources on destroying public sector unions.

Many states have passed free rider so-called "right-to-work" laws that force public service unions to advocate on behalf of workers who haven’t paid their fair share for those services. Since the outrageous, anti-worker Supreme Court decision in Janus vs. AFSCME, public service workers across the country work under this unfair free rider law.

It’s time to level the playing field by establishing federal protections guaranteeing public service workers the right to join together and collectively bargain. CWAers are fighting for Congress to pass the Public Service Freedom to Negotiate Act.

The Public Service Freedom to Negotiate Act gives dedicated public employees in every state the freedom to:

CWA strongly supports the Secure And Fair Elections for (SAFE) Workers Act. This crucial bill removes the Republican-initiated ban on electronic voting in NLRB representation elections, making it safer for workers to join unions during the pandemic, and streamlines the process of holding union elections.

The ability to vote and to have a voice are critical to the health of our democracy. But laws regulating voting, the role of money in politics, and corporate lobbying have not kept up with changes in American politics.

The For the People Act addresses this problem. It is one of the most important bills that Congress will be considering, because under our current system, too many people have no real say in our government. Instead, the agenda is set by people who have the time to navigate confusing voting procedures and who have the money to hire expensive lobbyists.

Corporate executives want to keep things the way they are so they can keep calling the shots. They're doing whatever they can, including spreading misinformation about the bill, to hold on to their power.

To loosen the hold corporate money has on our country, we must build worker power, and to do that we need the For the People Act.

Unfortunately, the outdated filibuster rule in the Senate means that most legislation requires a supermajority of 60 votes even to come up for debate. We saw this during the pandemic, where a partisan minority of Republicans were able to block crucial legislation to provide relief to working families. While there are some parts of CWA’s legislative agenda that can pass using an alternate process that only requires a simple majority, many of the most important items can be blocked by the filibuster.

The filibuster is just a rule set by the Senate – it is not a law and it is not in the Constitution. It has already been eliminated for federal appointments and judges. CWA members and allies are urging Democrats in the Senate to eliminate the filibuster and fix the broken Senate so that Senators can take the action that is needed to recover from the pandemic and build worker power.

Despite all the challenges arising from the pandemic, CWA members across the nation worked tirelessly to elect Joe Biden in 2020. Having a pro-worker president in office is an essential step towards building worker power and holding off the onslaught of anti-union regulations from corporations.

The federal government has a huge impact on employers’ behavior through the federal contracting process. Millions of workers nationwide work in the private sector under federal contracts. The Biden Administration is working towards creating executive orders that could require companies contracting with the federal government to not only pay employees a living wage and provide necessary family supporting benefits, but would ensure that taxpayer dollars go to only high-road contractors that respect workers.

Another way a president can shape policies that affect workers is through appointments. In contrast to Donald Trump, who put corporate cronies and union busters in charge of the Department of Labor, Joe Biden has shown that he will put people in charge who are dedicated to improving people's lives.

Marty Walsh, Biden’s pick for Labor Secretary, is a union member and elected union leader who has the backs of workers and knows the meaning of solidarity. That’s important because the Labor Department enforces safety and health regulations, protects pensions, and ensures that employers are following wage and hour and overtime rules. The Secretary of Labor can help influence Congress to pass pro-worker legislation, support bargaining and organizing campaigns, and expand and enforce federal worker protection rules.

Biden’s pick for National Labor Relations Board (NLRB) General Counsel, Jennifer Abruzzo, is CWA’s current Special Counsel for Strategic Initiatives and a brilliant attorney who understands how the actions of the NLRB affect the daily lives of people at their workplaces. The NLRB enforces laws about the kinds of collective action workers can take to improve their working conditions, including strikes; protects the right of workers to join together in a union; prevents and remedies unfair labor practices; and much more.

Passing legislation at the federal level is important, but there is a lot that must be done at the state and local levels.

Because there is not currently any federal law that gives public sector workers the right to join unions and collectively bargain, they are especially affected by state and local labor laws. In states where public sector workers do not have those rights, CWA members are pushing to enact new laws. CWAers are also advocating that state and local procurement funds prioritize the use of vendors that have union workforces and for requirements that vendors allow their employees to organize to join unions without interference.

For instance, CWA members in Missouri are mobilizing against efforts by Republicans to pass so-called "right to work" freeloader laws, even though Missouri voters resoundingly rejected a similar effort to ram through this anti-worker policy as a 2020 ballot initiative. In Florida, an out-of-state billionaire-funded think tank is advancing legislation that would make it far more difficult for all public sector workers to maintain their union membership, including more than 3,000 CWA members across the state. The bill would require dues authorizations to be renewed every three years or anytime a contract is reauthorized, meaning the union will have to spend valuable time collecting re-authorization forms from members who have never had any intention of leaving the union.

"This bill is designed to weaken the labor movement and take away the right for union representation on the job for tens of thousands of public employees in the state of Florida, and will adversely affect police, firefighters, teachers, and all other public employees who provide essential services to the public. This legislation is unnecessary, and CWA members in Florida are doing everything we can to fight back," said CWA Local 3181 President Rick Poulette.

For years, as companies have outsourced more and more work to cut costs, CWA members have worked tirelessly to pass state legislation to protect good union call center jobs across the country. Those efforts are continuing this year in states like Massachusetts, Tennessee, Oklahoma, Arizona, and Connecticut.

"One call center closing can devastate an entire community," CWA Local 1298 member Jim Case testified in a recent hearing on the Connecticut call center legislation. "The core of this bill is simple: no State taxpayer money should be used for companies that ship our jobs out of the state."

Ready to fight for worker power?

Visit cwa.org/workerpower to learn more and get involved!

Ready to fight for worker power? 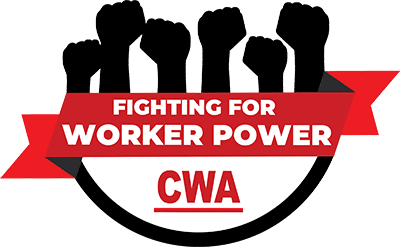