Fighting for a for Supreme Court that Represents Us All

Last week, CWAers and other union members across the country participated in a day of action in support of Judge Ketanji Brown Jackson’s nomination to the Supreme Court. CWA members called and emailed their Senators asking them to confirm Judge Jackson, a qualified, fair minded jurist with a proven track record of defending the rights of working people over corporations and powerful special interests. If confirmed, she would be the first Black woman on the Supreme Court.

Click here to call your Senators today and tell them that we need a justice like Judge Jackson who cares about fairness and won’t side with our bosses.

We will also be holding a national phone bank on Wednesday, March 30th, at 6pm EDT, to encourage members to call their Senators. Click here to register and build support for a Supreme Court that represents us all. 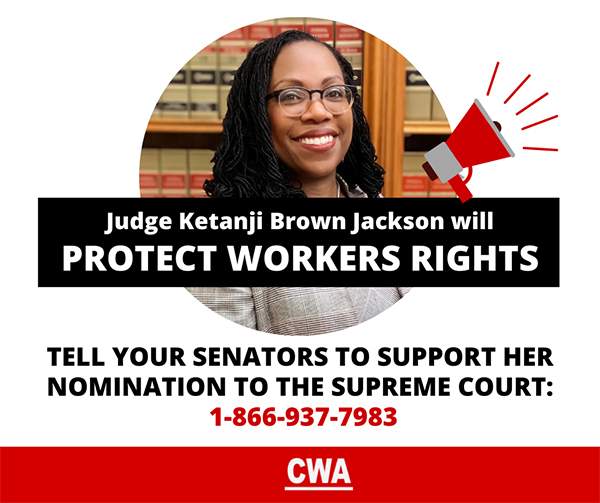 IUE-CWA Members Rally to Save Jobs

More than 50 workers from GE Lighting’s Bucyrus plant in Ohio traveled to Columbus to rally outside Republican Senator Rob Portman’s office and call on him to help keep their plant open and protect good jobs in their state. GE Lighting intends to shut down the plant, a move that will eliminate close to 200 good, union jobs and have a devastating impact on workers and their families as well as the local economy.

The same week that GE Lighting announced the shut down, Republicans in the Senate torpedoed a Buy American Light Bulb amendment that could have protected those jobs. The amendment had previously passed a House committee with a unanimous bipartisan vote.

Will Evans, President of IUE-CWA Local 84704, called on Sen. Portman to support Ohio workers by supporting the legislation.

“Senator Portman, it’s not too late to act now by supporting Buy American Light Bulb legislation in the U.S. Senate, so this time, with by-partisan support, it passes. Please do this now and show that you stand with us and with Ohio workers,” said Evans.

IUE-CWA President Carl Kennebrew expressed the workers’ and the union’s determination to convince Senator Portman to do what’s right for the Bucyrus workers and Ohio.

“Senator Portman has the power to protect these jobs and create even more jobs for workers in Ohio, and we are determined to make sure he does that,” said Kennebrew.

IUE-CWA members rallied in front of Senator Rob Portman’s office to save jobs.

eNewsletter Issue:
Mar 24, 2022 - Call Center Workers On Strike in Louisiana and Mississippi and other news