Senate Republicans Block Vote on S.1, the For the People Act

On Tuesday, in a 50-50 vote, Republican U.S. Senators refused to begin debating the For the People Act, also known as S.1. Every single Republican Senator chose to hide behind a filibuster vote instead of explaining on the record to the American people why they oppose this important legislation, which would end partisan gerrymandering, make voting easier, and end the dark influence of corporate money in politics.

Let Your Senators Hear from You

Tuesday’s vote against debating the For the People Act is not the end of the fight. From June 28 to July 10, Senators will be returning to their home states for the July 4th congressional recess. It's a great opportunity to let them know that their constituents support the For the People Act, the PRO Act, and other essential legislation. CWA and our allies will be holding events across the country. Learn more and find an event near you at cwa.org/deadlinefordemocracy.

CWA Next Generation Presents Workshop on Voting Rights in the States

Since the beginning of this year Republican state legislators in 48 states have introduced at least 389 bills to limit voting rights.

This Saturday, June 26, from 1-2:30 p.m. ET, CWA Next Generation will host “Voter Suppression in the States: A Virtual Workshop.” Georgia State Senator and CWA Local 3204 member Nikki Merritt will discuss the voter suppression laws recently passed in Georgia. Adrian Fontes, who is currently running for Arizona Secretary of State, will talk about threats to democracy in Arizona and how we can ensure voting rights are protected in every state and across the country. Click here to register now.

On June 21, the evening before the vote on the For the People Act, CWA President Chris Shelton joined Senate Majority Leader Chuck Schumer (D-N.Y.) and Tiffany Muller of the End Citizens United Action Fund for a virtual town hall meeting to discuss the bill.

“I want to make it clear that the entire labor movement stands strongly behind passage of the For the People Act,” said Shelton. “We will never see the progress we need to improve the lives of working people if we don’t pass it … Now is the time to stand up and say enough! We will not turn back. We will use this as an opportunity to ensure that all U.S. citizens have a right to participate in our great democratic system freely and fairly!” 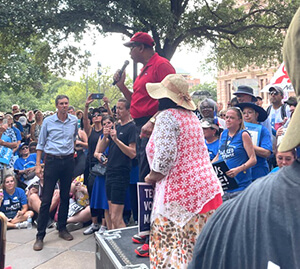 CWA District 6 President Claude Cummings, Jr., spoke to hundreds of labor and civil rights activists at a rally in support of voting rights at the Texas state capitol in Austin on June 20.

On June 20 at the state capitol in Austin, Tex., CWA members joined a crowd of more than 1,500 to rally against legislation that would restrict voting rights for millions of Texans. In a state that already has some of the strictest voting requirements in the nation, legislators are planning a special session to vote on new ID requirements for mail-in ballots, limits on early voting hours, fewer local voting options, and more protections for partisan poll watchers. Last month, Democrats walked out of the capitol to protest the bill, preventing a vote during the regular session.

District 6 President Claude Cummings, Jr., welcomed members to the forum recalling his wife’s experiences as a young girl in Selma on Bloody Sunday and the bravery of those who stood up against violence to defend the right of Black Americans to vote. “They weren’t doing it for themselves,” said Cummings. “They were doing it for us. We cannot let John Lewis and Rev. Dr. Martin Luther King, Jr., down. When we fight, we win, and we are not going back to Jim Crow 2.0!”