CWA call center organizers joined over a hundred other union organizers and members from 26 countries at the Organizing for Change at Contact Centres conference hosted by UNI Global Union. The conference, held in Antwerp, Belgium, put forward a workers’ agenda for the radically changing nature of the call center industry and the physical and mental health risks of remote work. The CWAers participated in discussions on several topics, including organizing in a work-from-home environment and in an industry with an annual turnover rate of approximately 40%, the challenges presented by AI, and company monitoring and surveillance of employees working from home. 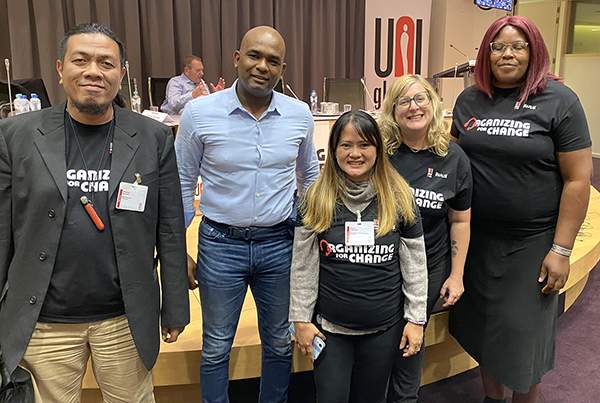 A group of Apple retail store workers, who are organizing with CODE-CWA, released a new video discussing the safety concerns they face at work. The workers reported being harassed, threatened, and even physically assaulted. “I have been present for some customer outbursts. Customers getting violent, throwing things,” said one worker in the video. The Apple workers also feel that the company has let them down by not taking their concerns seriously and addressing the growing safety issues retail workers face. The video features workers who are part of the organizing effort to form a union at Apple. “We need a union because we have nobody else who is listening to us,” said a worker in the video.

In addition to ignoring workers’ concerns about safety, Apple is also interfering with the workers' right to organize and violating federal labor law prompting several unfair labor practice charges. Following a four month long investigation, the National Labor Relations Board New York region formally issued a complaint against Apple last week for interrogating staff and restricting the posting of union fliers. “It is past time for Apple’s senior management to respect its retail employees and stop its unlawful and heavy-handed attempts to prevent them from forming unions,” said CWA Secretary-Treasurer Sara Steffens.

This week, CWA filed another unfair labor practice charge alleging managers at Apple’s Penn Square location in Oklahoma informed workers that support for the union was futile, threatened to withhold benefits from workers supporting the union, engaged in unlawful surveillance, interrogated workers, and subjected workers to captive audience meetings. The Oklahoma City Apple retail workers are slated to conclude their vote on joining the Apple Retail Union/CWA on Friday, October 14. “At the end of the day, we all just want respect on the job and freedom from intimidation. Apple workers like us deserve a chance to negotiate and envision our future at the company we love so we can all thrive,” said Michael Forsythe, who works at the Penn Square store. The workers are committed to keep fighting for a voice on the job and call on Apple executives to immediately stop the intimidation and retaliation against them and agree to a fair, neutral process for workers to decide to join a union.

The National Labor Relations Board (NLRB) has found merit on multiple issues raised by an unfair labor practice charge filed by CWA against Activision Blizzard for discriminating and retaliating against workers at its Raven Software studio. The determination affirms that Activision withheld raises from their lowest-paid workers on the basis of their union activity. During its investigation of the charge, the NLRB also discovered that Activision executives attempted to undermine the union by soliciting grievances from the bargaining unit during the organizing drive.

The workers at the Raven Software studio, members of Game Workers Alliance/CWA who are currently in contract negotiations with the company, said in a statement, “Despite their best efforts, Activision’s constant attempts to undermine its workers’ and impede our union election have failed. We’re glad the NLRB recognized that Activision acted illegally when they unequally enforced policies by withholding company-wide benefits and wage increase from Raven workers for organizing. We want the company to bargain a fair contract in good faith and to move past all of the cheap – and illegal – tricks they tried to pull to prevent us from forming our union.”