Workers at Seven Seas Entertainment won voluntary recognition last week, becoming the first manga and light novel workers in North America to form a union. The workers, members of United Workers of Seven Seas/CWA, systematically organized around issues such as healthcare, paid leave, work-life balance, higher wages, and increased transparency. Despite the fact that a super majority of workers expressed their interest in forming a union with CWA, Seven Seas Entertainment initially refused to voluntarily recognize their union and even hired a notorious union-busting firm to undercut their efforts. However, the workers persisted and ran a powerful public campaign using creativity and humor to galvanize support from fans and apply pressure on the company. Inspired by the groundbreaking Comic Book Workers United (CWA Local 7901) campaign, workers at Seven Seas organized with CODE-CWA and they hope their victory serves as an inspiration for a growing movement of workers organizing in the publishing industry. 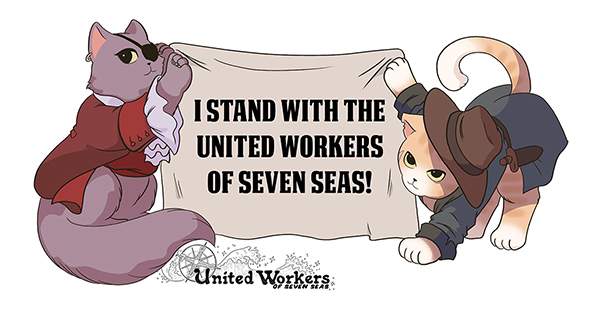 Throughout the organizing campaign, members of United Workers of Seven Seas/CWA changed their icons to one of these two mascots, Nyacola (left) or Bartolomeow (right), as a show of solidarity.

Workers at the Public News Service (PNS), a member-supported news service that advocates for journalism in the public interest, won voluntary recognition earlier this month. The group of about 25 reporters, editors, audio engineers, and outreach and membership specialists will join the Minnesota Newspaper & Communications Guild (TNG-CWA Local 37002). They look forward to negotiating their first contract and working with management to create a sustainable and equitable future for PNS.