Last week, Google Maps contract workers with Cognizant informed management that they planned to go on strike due to the unsafe working conditions imposed by the company's requirement that they return to the office on short notice. Shortly after, workers received an email that the company had been granted a 90-day extension on the return to office date. Many of the workers are members of Alphabet Workers Union-CWA (AWU-CWA), which agreed to provide organizing, strategic, and financial support for the planned strike.

“We are ecstatic; this is what collective organizing does—for weeks we have individually been raising concerns about the threat of COVID as 200 of us were being forced to return to the office, along with the logistical challenges presented to those of us struggling to find childcare or those working across state lines. Our individual concerns were ignored until we met with our coworkers and collectively took action to raise our shared demands and leverage our power. We love the work we do for Google Maps and will continue to organize until we can secure the flexible, safe, and fair working conditions we deserve,” said Shelby Hunter, a policy trainer at Cognizant and member of AWU-CWA.

This win underscores the growing organizing momentum within tech and the strength of wall-to-wall union models that allow all workers to join together, regardless of employment classification, to secure concrete wins for workers. Compared to Google’s full-time employees, temp, vendor, and contractor workers receive worse pay, inferior benefits, poor management, arbitrary policies, and inflexible return to office expectations. Workers are taking a stand against the growing abuse and mistreatment that enforces Google’s two-tiered workplace. Just this week, nearly a dozen Google contract workers with Artech won back thousands of dollars in back pay after discovering a discrepancy in their pay stubs, further highlighting pay transparency and wage theft issues facing Google’s temporary, vendor, and contract workers.

Last Friday, CWA filed an unfair labor practice charge against Activision for discriminating and retaliating against workers at its Raven Software studio. This is the third charge CWA has filed against Activision. It stems from the company's layoff of 12 Quality Assurance testers in December 2021, its reorganization of its operations to eliminate the Quality Assurance department three days after workers requested union recognition in January 2022, and its withholding of pay raises and other benefits in April 2022.

"The reorganization and withholding of pay raises and other benefits and the company's failure to rehire laid off QA testers were clearly attempts by Activision to intimidate us and interfere with our union election in violation of the National Labor Relations Act. We are holding Activision accountable by filing these charges," said Game Workers Alliance/CWA organizing committee members Erin Hall, Lau Nebel-Malone, and Marie Carroll.

The Raven workers won recognition for their union, Game Workers Alliance/CWA, on May 23, with an 86% majority vote.

Check out this new video from federal call center workers at Maximus, who went on a two-day strike last month demanding affordable healthcare and an end to poverty wages. The video features messages of solidarity from Senators Bernie Sanders (D-Vt.) and Cory Booker (D-N.J.), who are among the many elected officials and community leaders supporting the workers’ campaign to organize a union with CWA, get better pay, and improve working conditions. 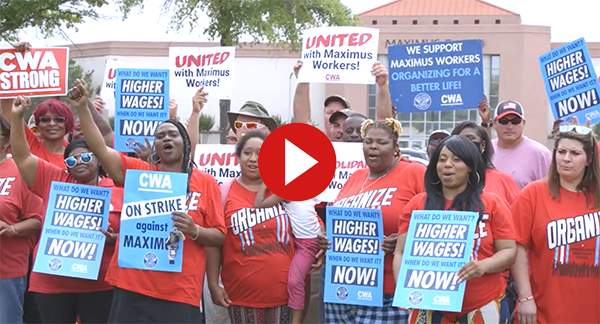 In a recent article in the Guardian, workers at Wells Fargo, the third largest bank in the U.S., shared stories about their ongoing campaign to organize a union across the financial institution. The article features interviews with workers from Wells Fargo United, a campaign with the Committee for Better Banks-CWA, who discuss the various challenges workers face and the constant struggle to have a voice on the job in the face of the company’s blatant anti-union stance. “If it’s left to the senior leadership, the changes won’t occur. So we have to collectively bargain and take control ourselves,” said Jessie McCool, a senior compliance officer at Wells Fargo.

Workers also discussed how the COVID-19 pandemic exacerbated ongoing safety concerns and stressed the need to have a union to prevent the abuse of workers and consumers. In 2016, whistleblowers with the Committee for Better Banks-CWA exposed Wells Fargo’s fake account scandal. Wells Fargo has faced a series of other scandals in recent years including mortgage and auto loan abuses, adding on products to customer accounts without their knowledge, a lawsuit alleging mass overtime pay violations, and more. Ted Laurel, an account resolution specialist at Wells Fargo, said, “We want the customer base to know that we’re forming a union really for them. We’re tired of having our name dragged through the mud at Wells Fargo because of things that we’ve asked to have more control over, but the company refuses to give us that control.”

Last year, CWA Local 9412 members at Beneficial State Bank successfully won the first union contract in the banking industry in 40 years. The workers at Wells Fargo hope to build on that win and organize to form a union and negotiate a contract that protects their interests as well as the interests of their consumers.