This week, Joe Biden and Kamala Harris announced the steps that they will take to stop outsourcing, including a series of executive actions during their first days in office.

Biden and Harris plan to fix the tax code so that corporations will face a penalty on any profits earned by a United States company from overseas production. This penalty will apply to call centers and manufacturing. In addition, companies will be eligible for a tax credit for making investments that create jobs.

Biden will also sign a series of executive actions during his first week in office to expand "Buy American" rules for federally-funded projects and crack down on companies that falsely label products "Made in America."

Although President Trump has frequently talked about ending offshoring, he has not only failed to follow through on his promises to bring back good jobs, but he has also actively encouraged companies to send jobs overseas. His 2017 corporate tax cut bill lowered taxes for companies on profits from overseas manufacturing and service facilities. The Biden-Harris plan will close that loophole.

Early in his administration, a group of Senators asked Trump to issue an executive order to prevent federal contracts from going to companies that send call center jobs overseas. Trump refused to issue the order.

"We've called on Trump to take executive action, time and time again," said CWA President Chris Shelton. "In fact, I went to the Oval Office and asked him myself. But what did he do about it? Nothing at all. Actually, it's even worse than that – he gave companies a 50% tax break on their overseas profits, giving them a huge incentive to move call centers and other facilities out of the country."

"IUE-CWA members have experienced first-hand having employers close the doors and move jobs overseas," said IUE-CWA President Carl Kennebrew. "Trump's tax bill gave companies a 50% off coupon for moving their money and jobs overseas. That's why I'm glad that we have a candidate like Biden who is serious about reinvigorating American manufacturing and has a strong plan to create millions of new jobs to rebuild our economy." 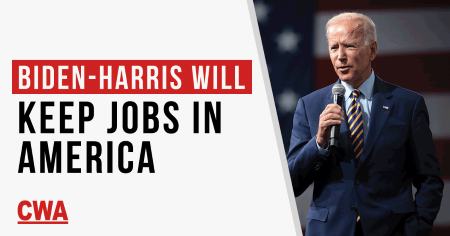