The movement for union representation at Verizon Wireless is growing!

Workers at Verizon Wireless stores in Flint, Mich., and Portland, Ore., have formed unions with CWA and filed election petitions with the National Labor Relations Board. Earlier this year, Seattle-area Verizon Wireless workers won their union election after an aggressive anti-union campaign from the company.

The workers stand firm in their commitment to form a union and work together for fair compensation, adequate staffing levels, health benefits, work-life balance, and a safe work environment that is built on respect and positivity.

CWA and IBEW have reached a tentative agreement with Verizon to extend the existing collective bargaining agreements for another three-year period. The current agreements are set to expire on August 5, 2023. The new agreements would extend through August 1, 2026. The contract will include long-term, work-from-home provisions. The details of the contracts are being distributed to locals and members will be voting to ratify the contract in the coming weeks.

Workers at WIRED, a tech magazine and website, reached a tentative agreement late Monday night after threatening to strike on Amazon Prime Days, two of the most lucrative traffic days of the year for WIRED Magazine. More than 95 percent of the workers, who have been bargaining for over a year, had signed on to walk off the job if the company refused to bargain in good faith and reach an agreement with the union. The workers, who are members of the NewsGuild of New York (TNG-CWA Local 31003), are part of a growing union movement at the magazine publisher Condé Nast’s publications, including Vogue, GQ, Allure, and Bon Appétit. Read more here.

Workers at Equality California, the statewide LGBTQ+ rights organization, are continuing their fight for a fair first contract. The workers, members of CWA Local 9003, won voluntary recognition a year ago. However, the organization falsely claimed that more than half of the unit are supervisors, a common anti-union strategy in the nonprofit industry. The workers appealed to the National Labor Relations Board and won recognition for the union’s full and undivided bargaining unit. Since then, the organization has failed to settle a fair contract by dragging out the bargaining process at every turn. The workers have demonstrated that they will continue to advocate for their rights in the workplace just as fiercely as they advocate for the health and wellbeing of the LGBTQ+ community. As a social justice organization, Equality California needs to do better by respecting its workers and bargaining a fair contract. Show your support by sharing this Twitter thread.

Ahead of the Maryland primary elections on July 19, CWAers are continuing to mobilize to build support for CWA-endorsed candidates in Maryland, including Gubernatorial candidate Tom Perez and Democratic Congresswoman Donna Edwards. Both candidates have an outstanding record of public service when it comes to improving the lives of working families, fighting discrimination, and taking on the forces that want to restrict democratic rights.

The next phone bank will be held tonight at 6 p.m. ET to help build support for Perez and Rep. Edwards. Join your fellow CWAers and fight for pro-worker and pro-democracy candidates. You don’t have to be a Maryland resident to participate. Click here to RSVP. 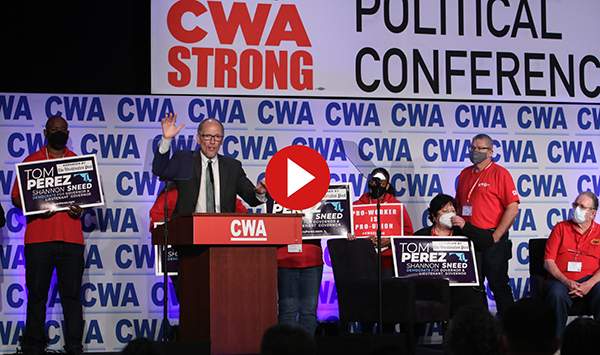 Check out this inspiring video of Tom Perez firing up the crowd at the 2022 CWA Legislative and Political Conference.

On Wednesday, CWA members in Milwaukee, Wis., held a rally and a press event to call on lawmakers to vote for the Protect the Right to Organize (PRO) Act. The CWAers were joined by other union members, elected officials, political candidates, activists, and community allies who demanded that their elected representatives stand with working families by supporting this critical piece of legislation. The event was held in front of Republican Senator Ron Johnson’s office. Democratic U.S. Senate candidates running to replace Johnson in the upcoming election including Lieutenant Governor Mandela Barnes, State Treasurer Sarah Godlewski, and Milwaukee Bucks Executive Alex Larsy took part in the rally.

The candidates spoke about their backgrounds working with unions and affirmed their support for the PRO Act. "It was [my parents'] union membership that gave me the opportunity to stand here in front of you all today as your lieutenant governor, and I will never give up that fight for working people,” said Barnes. "Growing up in a union family, I learned never to back down from a fight,” added Godlewski. Larsy called out Senator Johnson, "We need to make sure that we're taking care of our workers. Ron Johnson has done nothing but harm and take away the rights of all the workers that are up here...and actively wants to move jobs to another state." 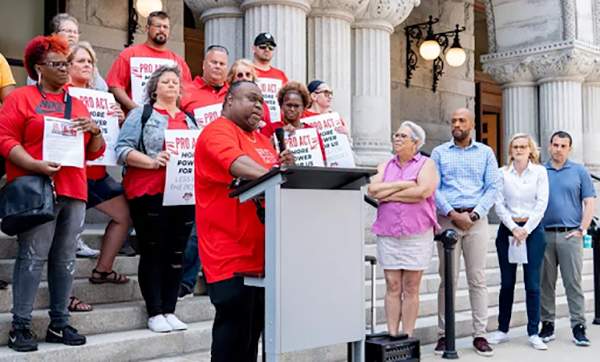 Union members, elected officials, and community allies in Milwaukee, Wis., participated in a rally and a press event hosted by CWA to call on lawmakers to vote for the PRO Act. 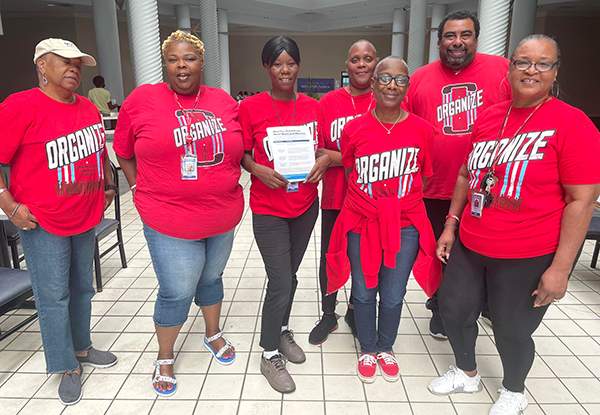 On Wednesday morning, a group of Maximus workers, organizing to form a union with CWA, leafletted the company’s hiring event in Hattiesburg, Miss. They talked to potential future Maximus workers about the working conditions at Maximus, including the fact that a typical Maximus worker makes 40% less than other federal call center workers. Management sent everyone in line home and told them they would follow-up on Zoom.

Join the Effort to Protect the Local News Our Communities Deserve.