Last Friday, in a tremendous victory, workers at Verizon Wireless stores in Everett and Lynnwood, Wash., won their union election. The workers, who have been organizing for months, remained united in their efforts to form a union even in the face of aggressive anti-union tactics from the company.

Workers and supporters held a tailgate outside of the Verizon Wireless store in Everett to watch and celebrate the official National Labor Relations Board vote count. After the tailgate, the workers met privately with Starbucks workers at a nearby store who recently formed a union and served as an inspiration for the Verizon workers to organize.

The workers now aim to create an organizing wave inside the company that can sweep across the country. They hope to inspire other Verizon Wireless workers to stand up, be brave, and fight for the union they deserve. 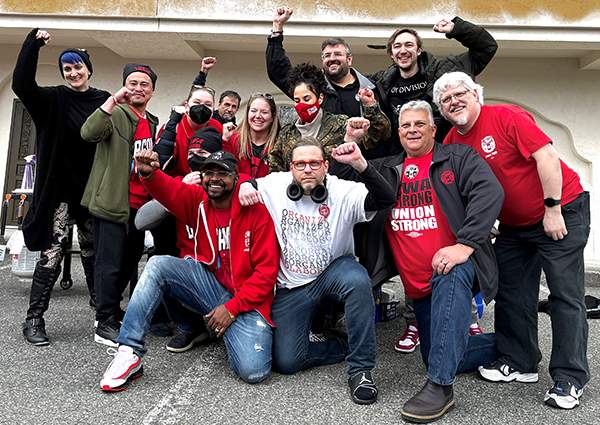 On Wednesday, Apple retail workers at the Apple Cumberland Mall store in Atlanta, Ga., filed for a union election with the National Labor Relations Board to join CWA, becoming the first group of Apple retail workers in the United States to seek formal recognition for their union. The newly formed union includes Apple salespeople, technicians, creatives, and operations specialists. Currently over 70% of the group of more than 100 eligible workers have signed union authorization cards.

“We welcome the workers who are organizing at Apple and call on the company’s management to reject union busting tactics so that they can vote without interference or intimidation. These workers have been indispensable during the pandemic and the high level of service and support they provide is critical to Apple’s success. By having a union voice, they will be able to negotiate lasting improvements to their working conditions.” said Ed Barlow, President of CWA Local 3204 in Atlanta.

The workers’ effort to form a union represents the latest in a recent wave of organizing victories across the country in various industries including Verizon Wireless, Google Fiber, Starbucks, Amazon, and more.

Apple retail workers in Atlanta, Ga., are organizing to form a union with CWA.

Last week, an overwhelming majority of wireless tower climbers at QualTek in Henderson, Nev., filed a petition with the National Labor Relations Board for a union election. The workers, members of the Tower Climbers Union/CWA, are the first group of tower climbers in the United States who have filed for formal union representation.

“We call upon Qualtek management to work with the Tower Climbers Union/CWA to negotiate a fair contract for tower climbers,” said CWA President Chris Shelton. “These workers put their lives at risk every day to maintain the wireless network for AT&T, Verizon, and T-Mobile. There is a growing movement among tower climbers across the country, and as hundreds of tower climbers join together in our union, we are building power on the job to raise wages, benefits, and ensure a safer workplace. Read more here.

Qualtek tower climbers in Henderson, Nev., are organizing to form a union with CWA.

Last Wednesday, Flight Attendants at Avelo Airlines won their union representation vote to join AFA-CWA, six months after filing for an election with the National Mediation Board (NMB). Avelo Flight Attendants have faced an aggressive anti-union campaign run by management, even as working conditions at the startup airline have led to some of the highest turnover rates in the industry. Flight Attendants first filed for recognition with the NMB last October. However, due to Senate Republicans blocking President Biden’s NMB nominees and frivolous delay-tactic filings by Avelo, the election was not scheduled for months. Immediately after their win, the Flight Attendants requested that management enter into negotiations for a fair contract that addresses retention and other ongoing issues. Read more here.