Last week, graduate student workers at Fordham University’s Graduate School of Arts and Sciences voted 229-15 to form a union with CWA. Their union, Fordham Graduate Student Workers (FGSW), which received an outpouring of support from Fordham faculty, state legislators, and Catholic organizations, will become part of CWA Local 1104 and will now look to negotiate a fair contract.

A new video from More Perfect Union highlights the challenges that workers at Verizon Wireless stores in Everett and Lynnwood, Wash., are facing in the workplace and why they are forming a union with CWA to address them. “I have made less money every year for nine years in a row,” said Austin Hitch, a Verizon worker who is featured in the video. “Verizon made up to four and a half billion dollars in profit, but they’re taking up to forty percent in hard-earned commission checks from their frontline employees,” added Steve Yu, another Verizon employee featured in the video.

For years, the workers have been facing retaliation by senior management and poor working conditions, including understaffing and unlivable wages. Instead of addressing the workers’ concerns, Verizon has engaged in aggressive anti-union tactics, including flying out their in-house union-busting team to Seattle.

The workers’ union representation vote is underway and ballots will be counted on April 15. 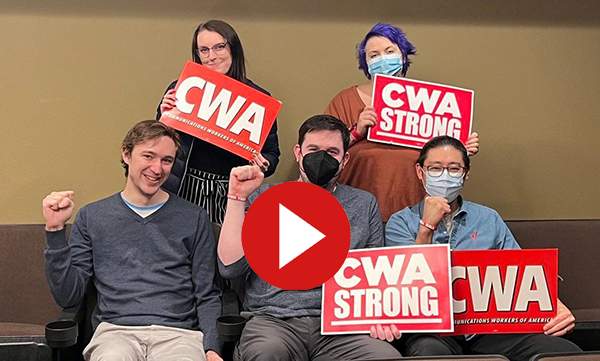 Last week, a supermajority of workers at Common Cause asked the organization’s leadership to voluntarily recognize the Common Cause Staff Union, part of the Washington-Baltimore News Guild (TNG-CWA Local 32035). Common Cause is a nonpartisan, grassroots organization with 1.5 million members and supporters dedicated to building a strong democracy. The workers plan to advance efforts that have already begun toward a more equitable workplace, a more just pay scale, and strengthened HR procedures.

CWA members at Frontier Communications in California are bargaining for a new contract after a previous deal was rejected by the membership. Earlier this week, the company blatantly rejected all written union proposals which included provisions on wages, job security, call routing, and call center commitments. In addition, the company has not shown any interest in engaging in mediation requested by the union bargaining committee. The members have continued to ramp up their mobilization efforts, including organizing public rallies to let Frontier know that they won’t stand for this obstruction. Read more here. 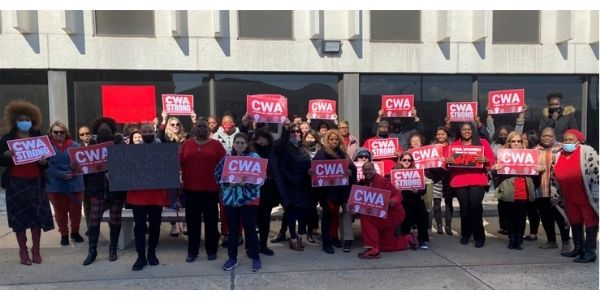 Last week, workers at the Union County Division of Social Services in Elizabeth, N.J., members of CWA Local 1080, took to the streets to demand a fair contract. The members, who have been mobilizing by flooding County Commissioners’ meetings, picketing at lunchtime, and wearing red every Thursday, are fighting for wage increases, affordable health care, and to address the high cost of living in their county. The previous contract expired in June of 2020.

Workers at Consumer Reports, a nonprofit consumer organization dedicated to independent product testing, investigative journalism, consumer-oriented research, public education, and consumer advocacy, overwhelmingly voted to ratify their contract on Tuesday. The unit includes 250 workers who are members of the Consumer Reports Guild, part of the NewsGuild of New York (TNG-CWA Local 31003). The ratified contract includes bonuses and wage increases, up to 12 weeks of parental leave with full pay, expanded use of paid sick time, and more.

Last week’s confirmation of Judge Ketanji Brown Jackson to the Supreme Court, on a bipartisan, 53-47 vote, is a momentous step towards ensuring equal justice for generations to come. Since her nomination, CWA members have been calling into Senate offices to demonstrate their strong support for Judge Jackson. Her confirmation would not have been possible had it not been for the hard work millions of working people, including CWA members, did to ensure that we have a pro-worker President and a pro-worker majority in the Senate.

As the first Black woman to be nominated for the nation’s highest court, Judge Jackson brings much needed diversity that is severely lacking in our entire judicial system. We applaud the Senate’s swift action and we thank President Biden for his continued commitment to protecting workers’ rights and to ensuring that the Supreme Court is representative of the makeup and lived experiences of the American people. Read more here.

National Labor Relations Board General Counsel Jennifer Abruzzo announced last week that she is asking the NLRB to find captive audience meetings categorically illegal. Captive audience meetings allow companies to force workers who are organizing to form a union to attend mandatory meetings where they are forced to listen to executives and union busting consultants talk about why they shouldn't form a union and why doing so would hurt them. These meetings are a common tactic used by anti-union employers and one of the main reasons why it is challenging for workers to form new bargaining units. Google Fiber workers who recently joined CWA had to deal with these intimidating meetings. Although the workers were brave enough to withstand those meetings and successfully organize, they never should have had to do so in the first place.

Abruzzo served as Special Counsel for Strategic Initiatives at CWA prior to being named NLRB General Counsel by President Biden. She replaced notorious union-buster Peter Robb, who was appointed by former President Donald Trump.

“This license to coerce is an anomaly in labor law, inconsistent with the [National Labor Relations] Act’s protection of employees’ free choice. It is based on a fundamental misunderstanding of employers’ [free] speech rights,” said General Counsel Jennifer Abruzzo. “I believe that the NLRB case precedent, which has tolerated such meetings, is at odds with fundamental labor-law principles, our statutory language, and our Congressional mandate. Because of this, I plan to urge the Board to reconsider such precedent and find mandatory meetings of this sort unlawful.”

This is a significant step towards reforming our labor laws and allowing workers to organize free from employer intimidation. Read more here.

Following last week’s announcement by President Biden to extend the current pause on student loan debt payments until September 1, 2022, CWA Next Generation released a statement applauding the pause on repayments and calling on the Biden administration to permanently cancel all student debt.

“The Biden administration has paused repayments four times and canceled over $15 billion in debt, and that’s a great first step, but it’s a small fraction of the debt crippling millions of American families. Cancellation would help them and would also move our economic recovery forward,” said CWA Telecommunications and Technologies Vice President Lisa Bolton, who directs the Next Generation program.

The Flight Attendants made it clear that empty promises from Spirit management “to do better” will no longer suffice. They will not be silent and stand by while Spirit Airlines continues to violate their employee contracts, leaving them on duty for 10 or more hours after flight cancellations and on hold with the company for hours. 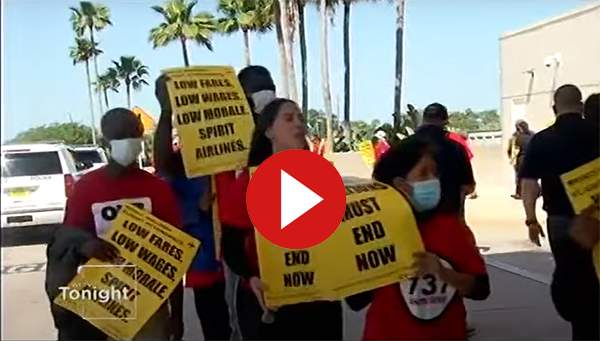 National Pet Day was April 11! Celebrate this month with a customizable Union Plus Pet Insurance health plan for your furry family member. Get a free quote here. 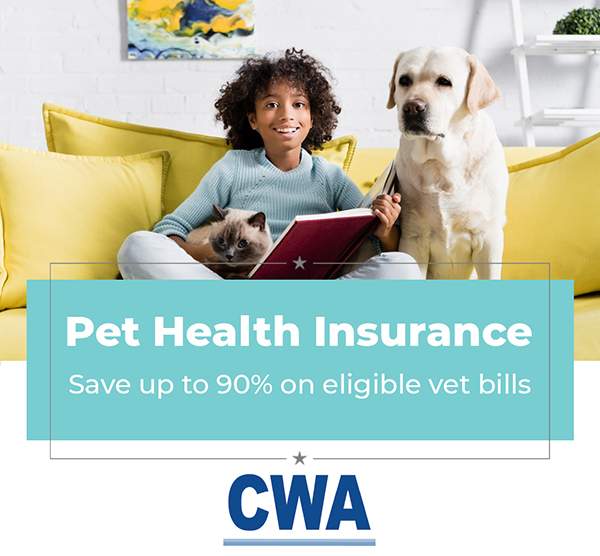