After management rejected their request for voluntary recognition, workers at Raven Software, a studio owned by Activision Blizzard, filed a union election petition with the National Labor Relations Board. The Game Workers Alliance (CWA) includes a super majority of workers in the quality assurance division of Raven, the Wisconsin studio that predominantly works on Activision’s popular Call of Duty game series. The workers are the first unit within Activision Blizzard to form a union. Microsoft recently announced plans to acquire the company.

“We are deeply disappointed that Raven Software and Activision Blizzard refused to uplift workers rights by choosing to not voluntarily recognize our union in spite of our supermajority support,” the workers said in a statement. “This was an opportunity for Activision Blizzard to show a real commitment [to] setting new and improved standards for workers…Once again, when management is given a choice, they always seem to take the low road.”

In early December, over 60 Raven Software workers walked out, protesting the company’s unfair and abrupt ending of the contracts of a dozen temporary Raven quality assurance workers. This strike was the third work stoppage since Activision Blizzard was sued in late July over sexual harassment and misconduct claims. In the past, Activision Blizzard has used surveillance and intimidation tactics, including hiring notorious union busters, to silence workers.

On Monday, workers at the Genesee Co-Op Federal Credit Union in Rochester, N.Y., won voluntary union recognition. The workers organized as part of the Committee for Better Banks, a CWA project.

Workers at Justice at Work Pennsylvania, a legal aid nonprofit that supports low-wage workers, announced Thursday that they are forming a union and seeking voluntary recognition from management. They would become part of The NewsGuild of Greater Philadelphia (TNG-CWA Local 38010). The union will include paralegals, administrative staff, and attorneys.

On Saturday, over 80 organizers and activists from across CWA District 7 attended a virtual retreat entitled, “Seizing Momentum Through Our Organizing Power.” The retreat included an organizing panel with 12 workers who are leading organizing efforts across telecom, tech, public, and other sectors. It also included several workshops to help organizers build their skills around digital organizing tools, fighting against anti-union campaigns, internal organizing, and more. The "Democracy, Race, and Labor" workshop featured Bill Fletcher, a renowned activist, labor leader, and author, and Steven Pitts, a labor scholar, activist, and host of Black Work Talk, as special guest speakers. The attendees took the time to reflect on what they learned during the retreat and how they can apply it in their ongoing campaigns.

CWA members covered by the AT&T Midwest and national Legacy T agreements have voted to extend their contracts for four years. The extended agreements include annual wage and pension increases, keep healthcare cost share percentages at their current levels, protect employment security, and continue recognition of Martin Luther King Jr. Day as a company holiday. The Legacy T agreement preserves commitments on the number of jobs that will remain in the unit.

“This extension meets our key goals: improving our members’ standard of living, protecting retirees, providing employment security, and maintaining affordable health care costs,” said Linda Hinton, Vice President of CWA District 4, which covers the Midwest. “We have been able to preserve the hard-won gains we have made over the years and provide stability for our members during these challenging times.”

“Our ability to reach an agreement to extend our contracts with AT&T at their current levels is a testament to the strength and resilience our members at Legacy T have shown over the past few years,” said Lisa Bolton, Vice President of CWA’s Telecommunications and Technologies sector. “I am particularly proud that we were able to keep our employment watermarks, the foundation of our job security, at their current levels. Maintaining these watermarks for 8 years is an unprecedented achievement.”

Contract negotiations for the AT&T Mobility and DirecTV Orange contracts have begun. The current agreement, which expires on February 11 after being extended for a year due to the COVID-19 pandemic, covers employees who primarily work in call center, retail store, and technician jobs across the U.S., mainly in the West, Midwest, and Northeast regions. The workers have raised concerns about issues such as the offshoring of call center jobs to low-wage countries, retail jobs going to Authorized Dealers, and contracting out of technicians’ jobs. The members have been actively mobilizing to strengthen their power at the bargaining table and improve their working conditions. Learn more and sign up for updates. For AT&T Mobility click here. For DirecTV click here. 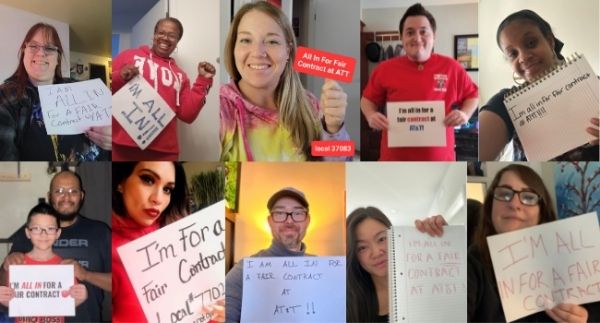 AT&T Mobility and DirecTV workers shared selfies on social media to show their support for a fair contract.

Two years after forming the Sports Illustrated Union (New York NewsGuild, TNG-CWA Local 31003) , workers at Sports Illustrated have reached a tentative agreement with management. The agreement includes a wage structure with fair minimum salaries for all positions, guaranteed yearly raises, just cause protections, a ban on production quotas, requirements for fair hiring practices, important protections for work-life balance, and more. The workers credited their activism and solidarity for this win. 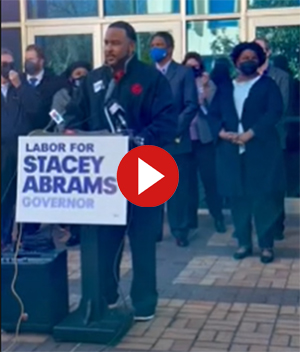 Ed Barlow, President of CWA Local 3204, spoke at a press conference held by the Georgia State AFL-CIO to announce their endorsement of Stacy Abrams for Governor.

Last Wednesday, Ed Barlow, President of CWA Local 3204, spoke at a press conference held by the Georgia State AFL-CIO to announce their endorsement of Stacy Abrams for Governor in 2022. Stacey Abrams is a proven workers' rights advocate and has committed to supporting CWA’s position on broadband expansion and collective bargaining rights for public sector workers.

“Our state leaders have an important role to play in ensuring that we Build Broadband Better by creating good union jobs and prioritizing closing the digital divide,” said Barlow. “This is a top priority for CWA and we are highly encouraged by the support we have received from our newly endorsed gubernatorial candidate Stacey Abrams for this effort. CWA members are ready to get started bringing high quality broadband to our communities and we are committed to ensure that the right candidates who stand with us are in office.”

On Monday, CWA District 2-13 endorsed Conor Lamb in the Democratic primary for the U.S. Senate in Pennsylvania. "Conor Lamb has proven two things in his career: he beats Republicans in tough areas and he stands up for working families," said CWA District 2-13 Vice President Ed Mooney. "Pennsylvania is the best opportunity we have to elect another Democrat to the Senate, it's ground zero for the Trump machine, and people all over the country are counting on Pennsylvania Democrats to win. Conor Lamb is the candidate we trust to win this election in November and to actually get things done for our members and all working people. We are all in to make sure Conor is our next Senator."

Last Tuesday, members of the United Campus Workers of Virginia-CWA, held a rally outside the Capitol and met with lawmakers to urge support for collective bargaining for all Virginia public sector employees. State lawmakers recently voted to lift the state’s longstanding ban on unions for public sector workers, which include teachers, law enforcement, and firefighters. The United Campus Workers of Virginia-CWA members are fighting to expand the law to include all of Virginia’s public colleges and university workers. The members are also calling for access to free and affordable college tuition, particularly for students living in communities where rents are rising, and ending tax loopholes for corporations to fund their goals. CWA Vice President for Public, Healthcare and Education Workers Margaret Cook spoke at the rally in support of this campaign. 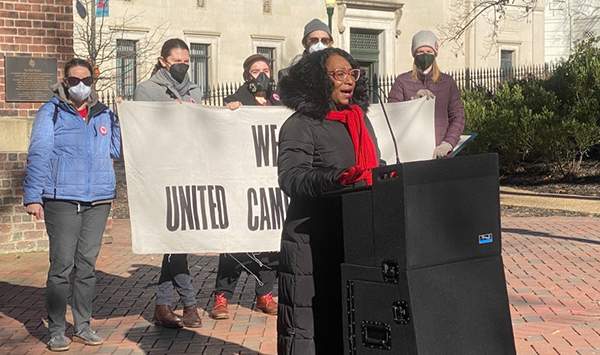 CWA Vice President for Public, Healthcare and Education Workers Margaret Cook spoke at the United Campus Workers of Virginia-CWA rally outside the Capitol in Richmond.

Despite receiving over $315 million in new taxpayer funds through the National Defense Authorization Act, General Electric has announced that it will be cutting jobs at its facility in Lynn, Mass. The jobs will be sent to South Korea, Canada, India, France, and China, as well as non-union facilities in the U.S.

“GE has ample space and resources in the U.S.-based facility in Lynn, Mass., to do this work efficiently, on-time, and on-budget, including a committed and highly skilled local workforce. It needs to focus on doing the work the right way in the place that makes the most sense – and that’s right here in the United States where taxpayers are already footing the bill,” said Adam Kaszynski, President of IUE-CWA Local 81201.

On Wednesday, Rep. Seth Moulton (D-Mass.) met with IUE-CWA members in Lynn to assess the situation. Moulton, a Marine Corps veteran who served in Iraq and now sits on the Armed Services Committee, has helped GE secure contracts to fund military manufacturing, including the Improved Turbine Engine Program and a contract for the creation of an additional 2,000 military helicopters.

GE recently announced plans to split into three companies, a move which is expected to cost $2 billion. IUE-CWA members have been raising the alarm about GE’s failure to invest in its U.S. workforce.

Workers in Lynn plan to protest the job cuts and continue outreach to gain support from elected officials.

Rep. Seth Moulton (right) met with IUE-CWA members to hear their concerns about GE’s plan to outsource and offshore jobs.

Maximus employs one of the largest federally-contracted workforces in the country under a contract with the Centers for Medicare and Medicaid Services (CMS). These workers, who are organizing with CWA to win better working conditions and a voice on the job, operate call centers that handle Medicare and ACA Federally Facilitated Marketplace calls.

In response to the national uprisings following the murder of George Floyd, the CWA Executive Board committed to create dedicated spaces for open dialogue on race for our members and leaders. The discussions will help determine outcomes and clear steps the union must take to fight racism in the union, within the industries we represent, and the community-at-large.

Last week, as part of those efforts, CWA-SCA Canada members attended a virtual training on Building An Anti-Racist Union facilitated by CWA’s National Human Rights Department. Participants engaged in discussions on recognizing implicit bias, understanding the difference between being non-racist and anti-racist, and ways to bring anti-racist practices into their workplaces and locals. The members stated they developed a deeper understanding of how racism affects our union and our ability to build power for working people by organizing across our differences. 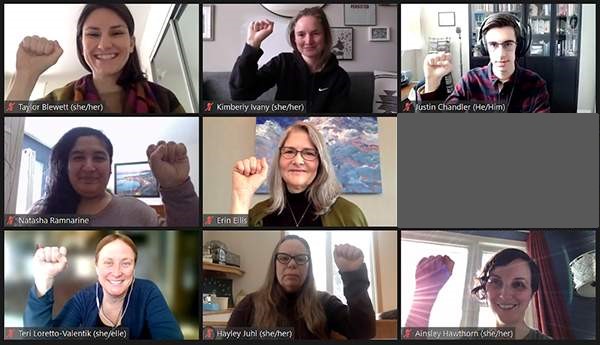