Dec 9, 2021 - Support Striking Workers Near You and other news

On Monday, workers at Integral Care, a non-profit agency that raises awareness about mental health issues and provides high quality mental health care in Travis County, Texas, announced that they are forming a union, the United Workers of Integral Care, with CWA. A group of more than 20 employees including social workers, mental and behavioral health care professionals, and support staff gathered with supporters at Integral Care’s South Austin headquarters to deliver copies of their new union’s mission statement, signed by nearly 90 of their coworkers. The workers are organizing to form a union to address major challenges at the company, including understaffing and high turnover. They will continue to mobilize to win voluntary recognition from the company.

The Alphabet Workers Union (AWU), CWA Local 1400, has filed a new unfair labor practice complaint with the National Labor Relations Board against Modis, a Google subcontractor, on behalf of an employee who was terminated for speaking up about the company’s unfair holiday pay policy. The policy dictates that workers be employed for at least six months before being eligible to receive the bonuses for holiday shifts. In March, as the result of a separate labor complaint at the same location, Google and Modis were forced to reinstate a fired worker and agreed not to silence workers discussing pay.

Because current labor law does not impose substantial penalties on companies that violate workers’ rights, many companies repeatedly intimidate and fire workers who speak out. The Biden Administration’s Build Back Better Act, currently under consideration in the U.S. Senate, would protect workers by fining employers up to $50,000 for each labor law violation, with fines increasing to $100,000 for repeat offenders. Company executives could also be held personally liable for breaking the law.

Last Thursday, New York NewsGuild members at BuzzFeed News (TNG-CWA Local 31003) walked off the job to demand a fair contract, the same day shareholders voted to take the company public. All of the union members participated in the 24-hour work stoppage.

After two years of fighting for a fair contract, they are calling on management to negotiate adequate pay raises, affordable health care, a sensible policy on “outside work,” and a prohibition on using traffic and revenue metrics as a basis for issuing discipline to workers. They walked off the job to demonstrate how vital the reporters, editors, photographers, designers, and operations people are to BuzzFeed and to put pressure on management to meet the workers’ demands. Read more here. 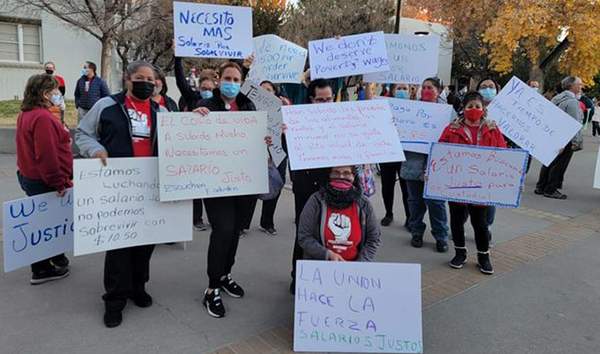 Last Friday, more than 200 workers, activists, and supporters rallied to tell the University of New Mexico (UNM) to end the practice of paying public workers poverty wages and stop union busting. The rally was organized by UNM workers, members of CWA Local 7076, to call attention to the fact that the UNM administration continues to line their own pockets while paying workers poverty wages, endlessly spending University funds on a third-party union busting law firm, and repeatedly ignoring health and safety concerns from custodial workers throughout the pandemic. Read more here.

Last Tuesday, members of the Crosscut Union, Pacific Northwest Newspaper Guild (TNG-CWA Local 37082), representing workers at two nonprofit news outlets based in the Northwest, voted overwhelmingly to ratify their first contract with Cascade Public Media. Highlights of the contract include the Rooney Rule, which requires management to extend interviews to candidates from underrepresented groups; protection against discrimination for employees who are parents; a salary schedule that improves pay equity and transparency; a paid time off system that gives staff more flexibility; and more.

Is Your AT&T Store Naughty or Nice?

In October, CWA Convention Delegates approved a resolution calling for the day of action, citing AT&T’s closing of hundreds of union-staffed retail stores, which have often been replaced by non-union “authorized retailers.”

During the day of action, CWA members, retirees, and community allies will distribute flyers at non-union AT&T stores to raise awareness of the impact of AT&T's shift to non-union authorized retailers on CWA members and on good jobs in their communities. The flyers direct customers to cwa.org/attstore to locate union-staffed stores. Check with your local to find out if there are actions in your area.

Thanks to the leadership and the activism of CWAers, the recently passed Infrastructure Investment and Jobs Act allocates $65 billion to expand our nation’s broadband networks. This funding will help states across the country bring their telecommunications infrastructure into the 21st century and create new jobs in the process. Since the passage of the bill, the CWA Broadband Brigade and local activists have been mobilizing to ensure states eligible to receive federal funding Build Broadband Better by creating good union jobs and prioritizing closing the digital divide.

In Texas, Robin Johnson (CWA Local 6215), a telecommunications worker and CWA Broadband Brigade member, called on state leaders to Build Broadband Better in an op-ed published by the Austin American Statesman. “That means prioritizing our low-income communities and Tribal areas, subsidizing the costs of services for the most vulnerable, and using trained union technicians who know how to build broadband infrastructure right the first time, not subcontractors that service providers hire to trim costs, who often cut corners, don’t know the equipment, and end up costing taxpayers more in the long-run,” she wrote.

In Michigan, local activists from CWA District 4 joined Congressman Andy Levin (D-Mich.) for a Infrastructure Investment and Jobs Act Broadband Roundtable. During the discussion, the CWA activists celebrated the passage of the bipartisan bill but cautioned that the funds must be invested in long term solutions and not just provide band-aids to our outdated system. The group also discussed the importance of passing the Build Back Better Act with pro-union provisions, including imposing meaningful penalties on employers who violate the health and safety of workers and their right to organize.

State and local governments will play a key role in deciding how to spend the infrastructure bill’s broadband funding. A new report commissioned by CWA and released by CTC Technology & Energy highlights public-private partnership strategies that have proven successful when deploying broadband in rural and other overlooked communities. “Communities can use their procurement authority to determine where broadband is most needed and ensure the buildout is done right,” said CWA President Chris Shelton. “This means working with companies that employ highly trained and experienced local union workers who know the area and the infrastructure. It also means building out high-speed fiber connections that can provide the necessary bandwidth today and in the future to meet households’ growing data needs.”

CWA backed candidates won big during the Atlanta run-off election last Tuesday. Andre Dickens, son of a retired CWA Local 3204 member won the mayoral race and Doug Shipman was elected as the new city council president. Both candidates were supported by CWA members who mobilized, held phone banks, and texted voters to turn out and support these pro-worker candidates. CWA activists in District 3 and across the country will be mobilizing to build on these wins in upcoming elections in 2022.

The Senate has yet to vote on the Build Back Better Act, a nearly $2 trillion, bipartisan spending package that will provide essential support to working families and ease the burden caused by the pandemic by expanding access to preschool and child care, extending the Child Tax Credit, instituting paid family and medical leave, allowing Medicare to negotiate prescription drug prices, imposing substantial penalties on employers and executives who break labor laws, providing $350 million in additional funding for the National Labor Relations Board, and much more.

We have to continue putting pressure on the Senate to enact this crucial legislation into law. Today, at 6pm ET/ 5pm CT/ 4pm MT/ 3pm PT, join fellow CWAers for a national phone bank and tell your Senators to support working families by voting for the Build Back Better Act. Click here to RSVP.

Over the last two weeks, CWAers across the country have been visiting Congressional offices to thank their representatives for supporting the Infrastructure Investment and Jobs Act and the Build Back Better Act. Click here to check out the great photos from these visits!

Looking to support fellow workers on the picket line? As more and more workers are exercising their power and leverage to gain dignity, respect, and a voice on the job, the AFL-CIO has released a new tool to make it easier for workers and community members to show solidarity with striking workers. Click on this map to see where workers are on strike across the country.

More than 50 trade unionists have been killed under the brutal regime of Philippines President Rodrigo Duterte. The Philippines, for the fifth year in a row, is one of the ten worst countries for workers to freely associate and to bargain collectively without fear and intervention, according to the International Trade Union Confederation’s (ITUC) 2021 Global Rights Index.

Elected officials and executives of multinational corporations doing business in the Philippines must speak out against the human rights violations that are on the rise in the Philippines and use their voices and influence to call for real reform. Congress should pass the Philippine Human Rights Act to suspend security assistance to the Philippines until the Duterte's regime ends its campaign targeting labor leaders and activists. 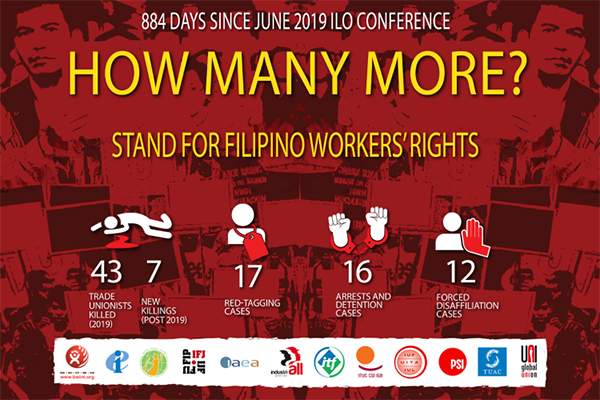