Dec 2, 2021 - CWA Workers Speak Up About Passenger Rage and other news

Last week, staffers at the ACLU of Virginia won voluntary recognition from their employer, almost a month after announcing that they were organizing to join the Washington-Baltimore News Guild, TNG-CWA Local 32035. The workers plan to continue the organization’s legacy of empowering and protecting workers. The ACLU of Virginia is one of a growing number of ACLU affiliates, along with the national chapter of ACLU, which have formed unions. TNG-CWA now represents workers at ACLU chapters in North Carolina, Kansas, Missouri, and Minnesota. Affiliates in New York, Northern California, Southern California, Maryland, and Georgia also have union representation.

​​News photographers, multimedia journalists, and video editors at WITI/FOX 6 in Milwaukee, Wis., have voted to join NABET-CWA. Station management waged a relentless anti-union campaign and challenged several ballots, but, thanks to the support and leadership of NABET-CWA Local 54041 President Chris Willadsen, the workers prevailed.

Workers at the University of Toledo, members of CWA Local 4319, have successfully ratified a new three-year contract. The new contract covers approximately 350 employees who provide clerical, maintenance, and custodial services primarily on University of Toledo's Main Campus and includes a 2% wage increase each year. The agreement is retroactive to Jan. 1, 2021, and will run through Dec. 31, 2023.

Blood services workers at the American Red Cross (ARC) have been mobilizing for months for a fair contract. Recently, the coalition of unions representing workers at ARC released a series of digital advertisements to build public support and put pressure on management to reach an agreement. The workers are preparing to take further action if management continues to fail to meet their demands on healthcare benefits, adequate staffing, safe working conditions, and other issues currently on the bargaining table. CWA represents hundreds of mobile and fixed site blood collection staff and laboratory technicians in Pennsylvania, Virginia, and New York, who are responsible for drawing blood from patients and donors, coordinating donor drives, diagnostic blood manufacturing, and more. 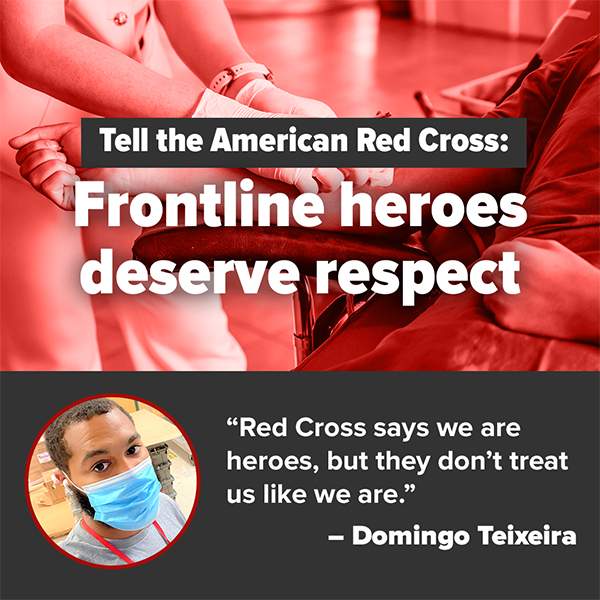 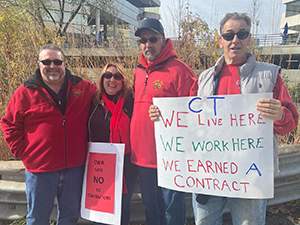 CWA Local 1298 members picketed outside of Frontier Communications’ headquarters in Norwalk, Conn., for a fair contract.

The week before the Thanksgiving holiday, Frontier workers in California participated in an online mobilization to determine who has been the “biggest turkey” in Frontier management. First place went to Nick Jeffery, President & CEO; John Richards, MGR & Field Labor Relations, came in second; and Alan Gardner, EVP & Chief People Officer, placed third. Instead of giving the 2,000 workers the respect and contract they deserve, the company is attempting to decrease the 401K company match, reduce retirement benefits, force workers to accept an insulting wage increase, and contract out more California work.

Frontier workers in Connecticut have also been ramping up their bargaining mobilization. Earlier this month, CWA Local 1298 in Norwalk, Conn., organized an action in front of Frontier Communications’ headquarters to demand a fair contract.

Middlesex County Board of Social Services

Workers at the Middlesex County Board of Social Services, CWA Local 1032, delivered a petition demanding a fair union contract.

Workers at Unidxs Por La Causa, CWA Local 7901, have created a petition asking community members to demand accountability and an end to union-busting at Causa Oregon. The workers won recognition as part of CWA Local 7901 in March, 2020, and are trying to bargain a first contract with raises for all workers, but management has brought in union-busting attorneys who have stalled progress. The workers will continue to build solidarity with the community they advocate for and fight for a contract that everyone will be proud of. 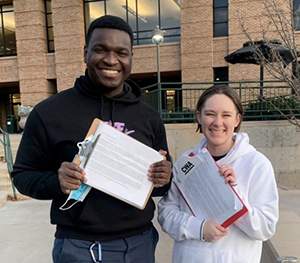 United Campus Workers in Colorado collecting signatures for a petition to raise the minimum wage to $15/hr.

There's still time to sign, and every signature helps support fair wages for these campus workers. Add your name here.

Day of Action for Good Jobs at AT&T

Save the date! Saturday, December 11, is CWA’s national day of action against AT&T’s outsourcing, job cuts, and union busting.

In October, CWA Convention Delegates approved a resolution calling for the day of action, citing AT&T’s closing of hundreds of union-staffed retail stores, which have often been replaced by non-union “authorized retailers.”

During the day of action, CWA members, retirees, and community allies will raise awareness of the impact of AT&T's shift to non-union authorized retailers on CWA members and on good jobs in their communities.

Keep an eye out for more information about actions in your area and opportunities to spread the word on social media.

Airline passenger service agents, members of CWA Local 6001, in Euless, Texas, released a digital ad campaign ahead of the holiday travel season to raise awareness about the rise in passenger rage incidents and to encourage civility among passengers. The ads are currently running on Facebook and Instagram. CWA represents more than 20,000 passenger service agents around the country, who are responsible for assisting passengers and keeping our air travel on schedule and safe.

Incidents of passenger rage including physical and verbal assault directed towards passenger service agents have been steadily increasing, but gaps in enforcement of federal law means that abusive passengers are often not held accountable for their behavior in airports.

Please watch and share this ad with friends, co-workers, and family members and encourage all passengers to be patient and understanding during one of the busiest travel seasons of the year. 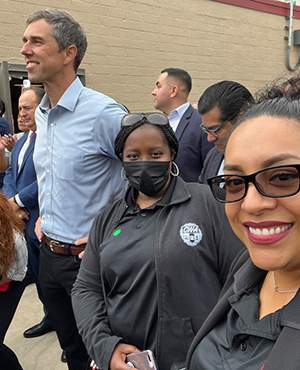 CWAers in Texas at a rally supporting Beto O'Rourke for Governor.

Earlier last month, CWA Local 6143 organized a Beto for Governor Kick Off event in San Antonio, Texas, to build support for Beto O'Rourke in the upcoming Texas gubernatorial election. CWA Local 6143 President Geronimo Guerra and Legislative Coordinator Charles Fuentes, along with local activists, joined hundreds of supporters to rally in support of Beto, a champion of working people, who is running against incumbent Governor, Greg Abbott.

It's time for competent leadership in Texas that fights for the interests of working class people across the state. CWAers in Texas and across the country will continue to support pro-worker candidates like Beto in upcoming elections.

On the eve of Thanksgiving, the House of Representatives passed the Build Back Better Act, a nearly $2 trillion, bipartisan spending package that will provide essential support to working families and ease the burden caused by the pandemic by expanding access to preschool and child care, extending the Child Tax Credit, instituting paid family and medical leave, allowing Medicare to negotiate prescription drug prices, imposing substantial penalties on employers and executives who break labor laws, providing $350 million in additional funding for the National Labor Relations Board, and much more.

CWA members have mobilized over the past few months to build support for this legislation and ensure that key priorities remain in it. The bill has now moved to the Senate and we have to continue doing everything we can to enact this crucial legislation into law. Next Thursday, December 9, at 6pm ET/ 5pm CT/ 4pm MT/ 3pm PT, join fellow CWAers for a national phone bank and tell your Senators to support working families by voting for the Build Back Better Act. Click here to RSVP.

The Senate has an opportunity to repair our political system and strengthen our democracy. S.1, The Freedom to Vote Act, is a bold and sweeping reform bill that will make it easier, not harder, to vote and get big money out of our democracy. Next Tuesday, December 7, join the national day of action by calling your Senator at 1-855-971-0720 and telling them to support S.1.

Join workers and activists from around the country at the upcoming COSHCON 21 virtual worker health and safety conference on December 7-9 and 14-16.

The conference is sponsored by the National Council for Occupational Safety and Health (COSH) and will be fully bilingual in English and Spanish. There is still time to register and attend all or just some of the more than 40 interactive workshops and sessions. There will also be inspirational keynote speakers, including Dr. Linda Rae Murray and Doug Parker, the new head of OSHA, and many panels featuring activists from around the country talking about frontline mobilizing for worker rights. Check out all the information here.

This program is open to everyone with a pay what you can policy. All participants MUST register to attend any part of the conference. Click on the scholarship button when registering for free or reduced fees. Click here to register.

This week we honor the memory of Bradley Dixon, a member of CWA Local 4502 who worked for the City of Columbus.