Nov 4, 2021 - CWAers Arrested During Voting Rights Action and other news

Workers at Maximus, who have been organizing with CWA, provide much needed assistance to millions of Americans with enrolling in affordable health plans during open enrollment season for Medicare and the Affordable Care Act (ACA). But a new nationwide analysis by CWA has found that the company offers call center workers health plans that are more expensive than comparable plans and expose workers to high out-of-pocket expenses in the form of high deductibles.

This report clearly shows that the very workers who the federal government trusts to help millions of Americans access affordable healthcare are struggling to afford their own. Listen to the workers, with the support of the Mississippi NAACP and AFL-CIO, describe in their own words how this unaffordable health care affects them and their families. In the past, Maximus workers have fought to increase wages and improve working conditions despite pushback from the company. Now, they are organizing to win affordable healthcare for all Maximus workers. If you are a Maximus employee, click here to share your healthcare story and join the fight.

After months of negotiations, members of CWA Local 4319 ratified a new three-year agreement with the University of Toledo earlier this month. Despite challenges caused by the pandemic, including the loss of bargaining team members to layoffs, the workers stood strong through months of negotiations and won wage increases, the recognition of Juneteenth as a paid holiday, reimbursement for safety shoes and winter footwear, and classifications for additional positions. 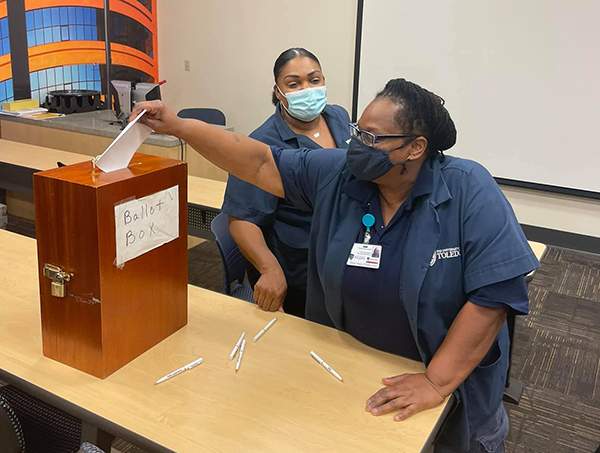 Workers at the University of Toledo voting to ratify their new three-year contract.

Workers at the Daily Hampshire Gazette and members of the Pioneer Valley NewsGuild (TNG-CWA Local 31041) have launched a “work-to-rule” campaign, taking a stand against understaffing and outsourcing at the Northampton, Mass., publication. The workers have been bargaining for a first contract with Newspapers of New England, Inc. (NNE), which owns the paper and eight other dailies, weeklies, and digital publications, for almost two years. Read more here.

Last Friday, workers at Politico and E&E News announced that they are forming a union as part of NewsGuild-CWA. An overwhelming majority of the more than 250 workers including reporters, producers, copy editors, page designers, audio engineers, videographers, and others have signed cards in favor of forming the Politico and E&E News (PEN) Guild, which will be part of Washington-Baltimore News Guild (TNG-CWA Local 32035). Read more here.

On Tuesday, workers at NPR’s Communications and Audience Growth divisions, asked for voluntary recognition from management to join Digital Media United (NABET-CWA Local 52031). This organizing effort follows a campaign by digital media workers at NPR who won voluntary recognition earlier this year. The workers hope to build on this win and join the movement for greater solidarity at NPR. Read more here.

On Wednesday, CWAers and other activists from across the country rallied in front of the White House demanding that our elected officials put an end to the filibuster, and pass the Freedom to Vote Act and the John Lewis Voting Rights Advancement Act. Time after time, the filibuster, a relic of the Jim Crow era, has been used to block critical civil rights and voting rights legislation. Now, Senate Republicans are hiding behind it and allowing Republican-led state legislatures to enact racist, discriminatory anti-voting laws. Just yesterday, Senate Republicans filibustered the John Lewis Voting Rights Advancement Act, the third time this year they have blocked debate on voting rights.

Several activists at the protest, including CWA Secretary-Treasurer Sara Steffens, participated in civil disobedience by getting arrested to demonstrate how dire this issue is. A few weeks ago, delegates to the 78th CWA Convention voted overwhelmingly to pass a resolution to end the filibuster and save our democracy. CWA will continue to make our voices heard and fight to ensure all Americans have access to their most fundamental right. 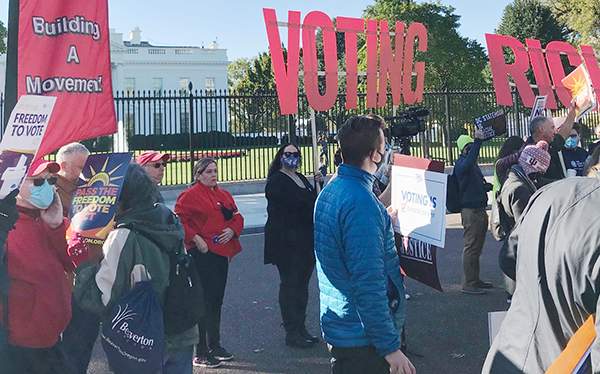 CWA Secretary-Treasurer Sara Steffens and other CWAers at the protest in front of the White House demanding an end to the filibuster and the protection of voting rights for all.

Several states and municipalities held critical elections on Tuesday. In New Jersey, CWA endorsed candidate Phil Murphy was re-elected for another term as Governor. Governor Murphy has proven himself a true champion of working families and we are proud of the instrumental role CWAers and other labor activists played in delivering this key win.

Congratulations to all of the CWAers who won elected office and to all CWAers who have been in the forefront mobilizing to elect pro-worker candidates.

CWA activists have been visiting Congressional offices in person and making phone calls to build support for the Build Back Better Act. The Build Back Better Act will support working families and retirees by expanding Medicare to include hearing coverage, increasing the child tax credit, and limiting child care costs. It will ensure that corporations pay their fair share of taxes and stop rewarding them for shipping jobs overseas. The bill also includes parts of the PRO Act which would make it easier for workers to join unions to improve their wages and working conditions. 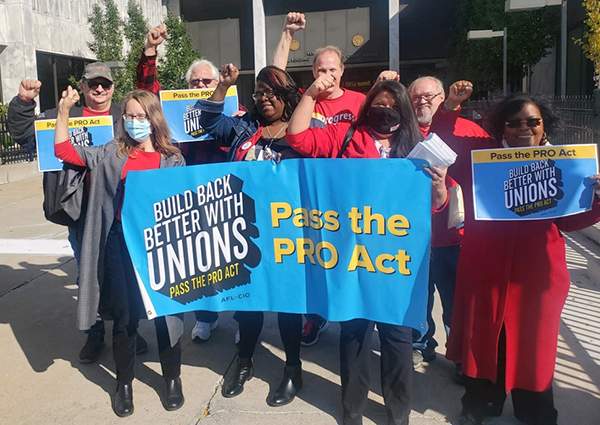 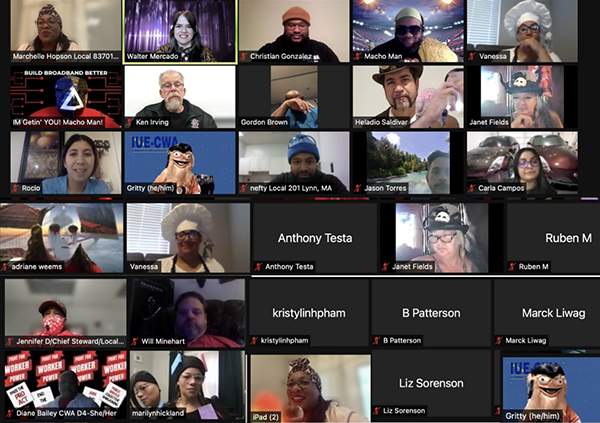 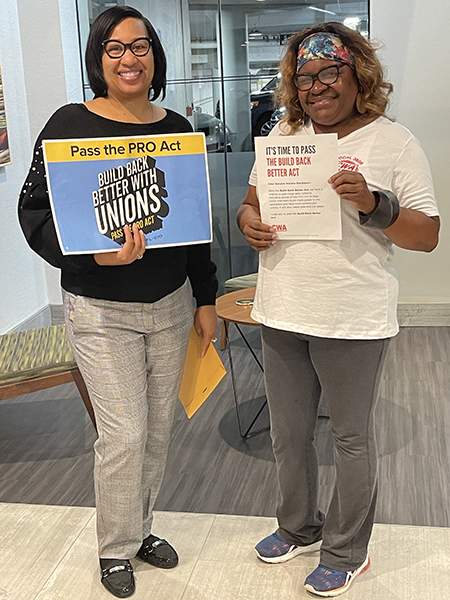 Last Friday, CWA members from Local 3808 delivered hundreds of petition signatures to Senator Marsha Blackburn's (R-Tenn.) office in Tennessee urging her to do the right thing and support the Build Back Better Act. 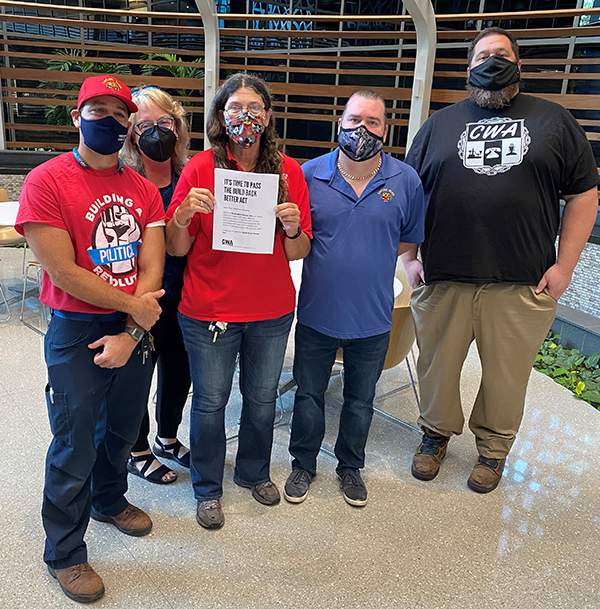 On Tuesday, a delegation of CWA members visited Rep. Stephanie Murphy's (D-Fla.) Orlando office to drop off over 200 signed petitions asking for her support for the Build Back Better Act and met with her staff to discuss how crucial passing this legislation is to improve the lives of working people.

Apply for the Beirne Foundation Scholarship for 2022-2023

The CWA Joe Beirne Foundation will award 16 partial college scholarships of $4,000 each for two years for the 2022-2023 academic year. CWA members, their spouses, children, and grandchildren are eligible for the scholarships, including the dependents of retired, laid-off, or deceased members.

Click here for the poster that can be distributed to members and posted on local websites to encourage participation.

The Beirne Scholarship Program is made possible by funding from CWA locals. Read more about the program here.

Join us tonight for a virtual celebration of the accomplishments of our districts, locals and sectors and to honor outstanding achievements in organizing, political action, and more. 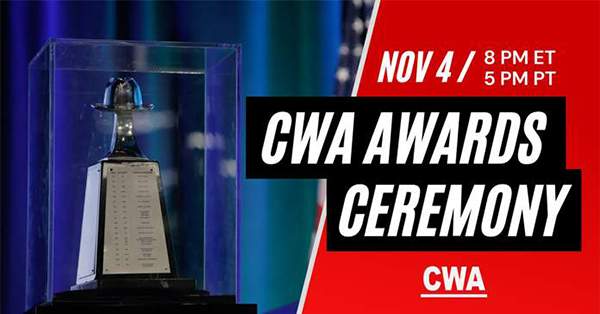