Oct 21, 2021 - Highlights from the CWA Convention and other news

Last Thursday, workers at the National Audubon Society in 11 regions across the country each filed for a separate National Labor Relations Board election, representing the latest and largest effort to secure union representation at the environmental nonprofit. These 11 regions represent more than 120 Audubon employees in the Upper Midwest (Iowa, Minnesota, and Missouri), Southwest (Arizona and New Mexico), Northeast (New York and Connecticut), the Great Lakes (Illinois, Ohio, Michigan, and Wisconsin), the Mid Atlantic (Pennsylvania and Maryland), North Carolina, Nebraska, Alaska, Washington, Vermont, and California. This worker-led push follows an incredible win last month for Audubon employees in the organization’s national headquarters who voted overwhelmingly in favor of forming a union with CWA.

Earlier this month, developers at the San Francisco Chronicle won their union election to join the San Francisco Chronicle Guild, which is part of the Pacific Media Workers Guild (TNG-CWA Local 39521). This follows an important victory last month when the National Labor Relations Board ruled that the developers had the right to join the existing San Francisco Guild unit. Among other responsibilities, these developers are tasked with creating technology such as fire trackers, earthquake trackers, COVID trackers, and endless other reader-friendly information tools. The developers’ victory is the latest win by tech workers, who are organizing in large numbers to form unions.

CWA President Chris Shelton: We Will Not Give Up

On Monday, CWA President Chris Shelton addressed the delegates to the 78th CWA Convention, held virtually for the first time ever in order to prioritize the health and safety of members, leaders and staff during the ongoing COVID-19 pandemic. In his keynote address, President Shelton acknowledged the difficulties of dealing with a global pandemic and how its impact has been exacerbated by the ongoing challenges facing working families including the climate crisis, public health crisis, political extremism, attacks on voting rights, and corporate greed, but reminded delegates that “[i]n hard times like these, our job as leaders is to nurture hope, to help it grow, to spread the spirit of hope to our members and to our communities.”

“During the early months of the pandemic, having a union literally made a life and death difference to working people,” said President Shelton and added, “we should be so proud of how CWA responded to this crisis!”

He recognized the CWA activists who mobilized to elect pro-worker candidates like Joe Biden and win back the U.S. Senate in the last election and encouraged all CWAers to build on this momentum and beat back the increased attacks on voting rights and our democracy. “Just as every generation has had to stand up and fight against reactionary forces that want to take us backwards, now is our time to stand up and say ENOUGH! We will not turn back. We will fight to expand our voting rights and defeat the campaign to undermine our democracy.”

“CWA has organized nearly 15,000 new members – the most in any two year period since we organized American Airlines passenger service workers in 2014,” stated President Shelton, while highlighting CWA’s organizing wins since the last Convention, including in non-traditional sectors such as non-profit organizations and tech workers. He also acknowledged that there is more work to be done. “We will not end income inequality or have a truly democratic society until millions of non-union workers at companies like Amazon and Wal-Mart have a voice on the job. But there are sparks out there; flames of unionism are igniting. Our job is to fan those flames until they become a full-blown organizing wildfire.”

President Shelton outlined the various adjustments we have made to strengthen our CWA structure in the past and encouraged delegates to support the Support Members and Rebuild Together (SMART) resolution, which was adopted by the delegates.

He recognized the Frontier workers fighting for a fair contract in California, who recently held a one day ULP strike, and the healthcare heroes in Buffalo, N.Y., who are currently striking against the Catholic Health System over worker safety and quality of care for patients.

“Brothers and sisters, we have been through hard times together before. But we will not give up and we will not let up. I know you will keep on fighting until every job is a union job and every worker is treated with respect and dignity.”

Read the full speech and watch the video here. 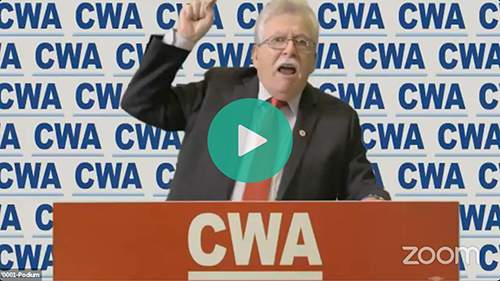 Delegates to the 78th CWA Convention adopted the Support Members and Rebuild Together (SMART) resolution that will allow for a portion of the existing Strategic Industry Funds to be allocated for direct service to members and organizing to build our power. Under the resolution, the allocated funds will be used to hire new, permanent CWA Staff Representatives and Organizing Coordinators to support locals and members by bargaining and enforcing contracts, delivering training, mobilizing, and helping workers organize. This is an important and necessary step to mitigate the financial hardship our union has faced due to the ongoing pandemic.

In addition to the SMART resolution, delegates to the 78th CWA Convention adopted several resolutions – modernizing CWA National Officer elections, committing to the fight against the climate crisis and preparing CWAers to move into industries of the future, continuing to build international solidarity with workers across the globe, strengthening our fight to build broadband better and end the digital divide, calling for protections of frontline airline workers from abusive and violent passengers, demanding an end to the filibuster and save our democracy, and other resolutions addressing critical issues impacting CWA members.

Read all the adopted resolutions here.

Additionally, delegates also adopted proposed amendments to the CWA Constitution that would incorporate the CWA Policy on Mutual Respect, the Union’s guiding language on the topics of discrimination and harassment, into the CWA Constitution, expand the definition of who is qualified to file charges of harassment and discrimination, and make violations of the policy chargeable under the trial board process.

Delegates also adopted policies, reports, and actions to keep our union moving forward, including reports from the National Committee on Civil Rights and Equity and the National Women's Committee.

Correction: An earlier version of this story mistakenly stated that the delegates adopted a proposal to appoint a trial coordinator to oversee the trial process when a charge of violating the CWA Policy on Mutual Respect is filed.

More from the 78th CWA Convention

In her address to the 78th CWA Convention, Secretary Treasurer Sara Steffens told delegates that “there is no magic route to recovery. The way forward is the same it always has been – the only way our movement has ever won anything – by bringing working people together to fight for what we are due.” Read her full remarks and watch the video here. 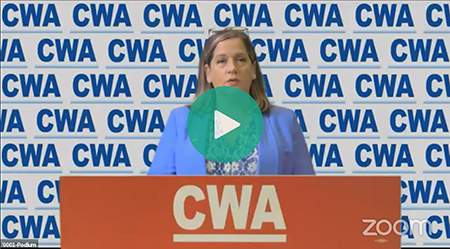 Delegates also heard from U.S. Secretary of Labor Marty Walsh and held a memorial service to remember those we have lost to the COVID-19 pandemic. 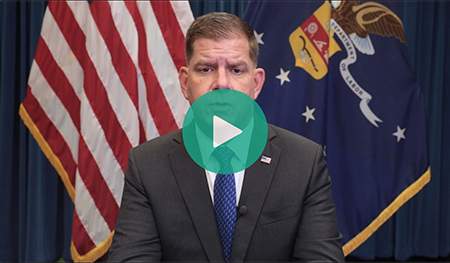 Gloria Middleton, President of CWA Local 1180, was elected Diversity Board Member for the Northeastern Region by acclamation of the Convention delegates.

Awards to locals in recognition of their accomplishments in political action, organizing, and more, traditionally presented during the Convention, have been postponed due to unforeseen delays in the schedule. A separate awards ceremony will be live-streamed in the near future. Keep an eye out for an announcement in the Newsletter!

Last week, in a win for the striking healthcare workers at Catholic Health System’s Mercy Hospital in Buffalo, N.Y., New York State Attorney General Letitia James issued a Cease and Desist order to scab company Huffmaster. Huffmaster has been hired by the Catholic Health System to bring in strikebreakers and provide security. The Attorney General’s Labor Bureau found that Huffmaster is not licensed to operate as either an employment agency or a security service in New York State.

Nearly 2,000 healthcare workers, members of CWA Local 1133, are on Day 21 of their strike after the hospital system failed to reach a fair agreement on a new contract. Issues on the table include understaffing, equipment shortages, low wages, and healthcare costs.

The striking workers and their supporters have been ramping up their mobilization efforts and actions on the picket line. In the last couple of weeks, they have held a candlelight vigil and unveiled a "COVID Heroes Wall'' outside of the hospital with hundreds of photos and stories. Support for the strike has been steadily increasing with more and more supporters including other CWAers, elected officials, and members of other unions, such as the Buffalo Musicians Association, who played live music for the picketers, joining the picket line everyday. 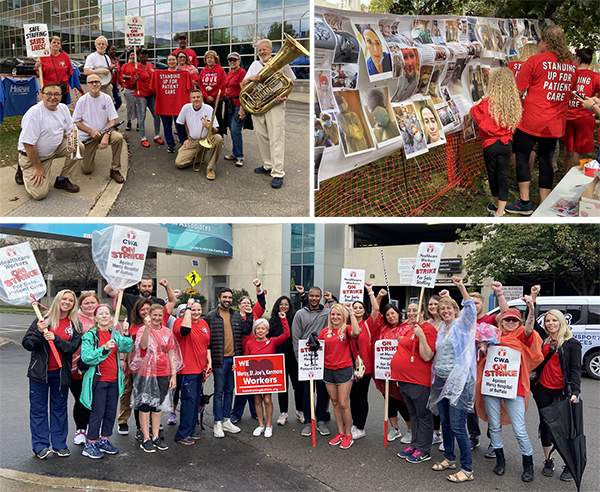 CWA members make sure that working people’s issues are front and center in local, state, and national elections, and some are even running for office themselves. As part of an ongoing series, we are spotlighting CWA members across the country who are candidates for office in upcoming elections.

Fred Hogan is a Wastewater Operator at the Lynn regional-wastewater treatment facility and a member of IUE-CWA Local 81201. He has been serving as the Ward 6 Lynn City Councilor in Massachusetts since January 2019 and is currently running for re-election. Fred is actively involved with his union and the labor movement, serving on the Policy Board and Legislative Committee at his local and as a Delegate of the North Shore Labor Council. Fred identifies flooding as the most important issue facing the city and Ward 6. In addition, Fred is focused on criminal justice reform including furthering the city’s community policing efforts. If re-elected, addressing the needs of the residents of Lynn City and Ward 6 and continuing to be their advocate will remain his top priority. Click here to learn more about his campaign. 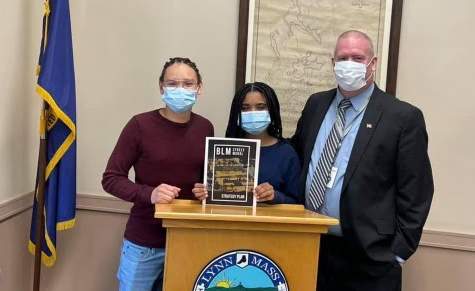 In a press release announcing the digital advertising campaign, Kim Fife, a CWA call center worker based in Cleveland, Va., said, “sending jobs overseas has devastating impacts on thousands of workers and communities like mine. The offshoring of call center jobs has put enormous pressure on us here in the states to accept lower wages and cuts in benefits. We deserve dignity, respect, and justice in the workplace and in our communities. That’s why hard-working people in Virginia need a Governor who fights for good jobs, not just their own corporate interests.” 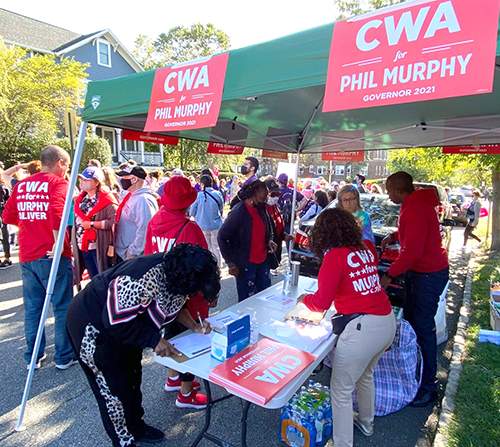 Last week, CWA members in Arizona participated in several actions in support of the PRO Act and the Build Back Better Act. The CWA members joined with members of OUR Revolution, Arizona Educators United, Democratic Socialists of America, Mi Familia Vota, Green New Deal Coalition, and members of other unions to call on Senator Sinema (D-Ariz.) to support these critical pieces of legislation.