Sep 23, 2021 - Investors Threaten Telecom Jobs and Pensions and other news

CWA and the Strategic Organizing Center’s Investment Group (SOC Investment Group) published a new first-of-its-kind report that exposes the long-term harm of Elliott Management, one of the world’s largest activist hedge funds, to companies it targets with its predatory tactics, like AT&T and Frontier Communications. The report also shows that Elliott harms the pension funds that invest with the hedge fund, underperforming less risky public market investments and creating a risk of over-diversification.

The report, “Activist Hedge Fund Risks to Pension Funds: The Case of Elliott Management,” shows the various ways Elliott Management’s activist interventions negatively impact the long-term health of the companies it has targeted, including reduced employment and investment.

“For years we’ve been watching as activist hedge funds extract cash from their target companies, resulting in job cuts and a failure to invest to support long-term company growth,” said CWA President Chris Shelton. “Elliott Management, one of the world’s largest activist hedge funds, has been at the forefront of this in critical sectors like telecom and energy, using bankruptcies and proxy contests to achieve its own short-term gain before exiting. Our report clearly outlines the lasting financial consequences this has for target companies and the negative knock-on effects for pension funds and other investors.”

After months of negotiations, workers at creative agency Blue State have voted to approve their first collective bargaining agreement. The agreement provides job security, structure, and clarity for the workers, who are represented by CWA Local 1101 in New York. The group organized as part of the CWA’s CODE-CWA initiative and won voluntary recognition in October, 2020.

Workers at the Boston Globe (TNG-CWA Local 31245) raised their concerns about mistreatment and basic workplace rights in an open letter to legendary feminist Gloria Steinem. The letter was sent ahead of Steinem’s scheduled appearance with Boston Globe Media Partners CEO Linda Pizzuti Henry on a WBUR 90.9 FM sponsored panel on Monday. The NewsGuild-CWA represents about 300 reporters, editors, advertising staffers, IT specialists, and more who have been working without a contract for almost 1,000 days.

The workers also protested outside the WBUR event to call out Pizzuti Henry's lack of support for the employees. The letter and the protest were the latest in a series of public rebukes of Globe management, including a Friday night scorecard giveaway at Fenway Park during which Globe employees handed out free scorecards informing fans that Globe executives were “striking out” when it comes to the treatment of their employees. 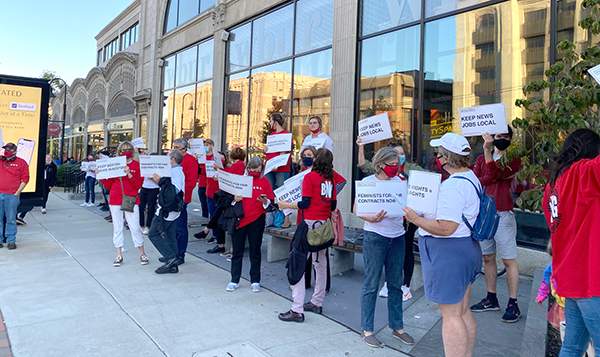 Frontier workers in California have been picketing to raise awareness and increase pressure on the company to negotiate a fair contract with the union. In the LA Times coverage of a picket organized by CWA Local 9510 in Huntington Beach, workers shared their grievances against the company which has failed to meet the demands of the nearly 2,000 Frontier workers represented by CWA in California. The current contract has expired and the workers have overwhelmingly passed a strike authorization vote that gives the union the ability to strike if necessary. Frontier workers across the state continue to mobilize and fight for a fair contract. For more information on bargaining updates please visit the CWA District 9 Website.

Frontier workers in California picketing for a fair contract.

Last Friday, workers at the New York office of Oxford University Press, the largest university press in the world, voted overwhelmingly in favor of forming the Oxford Union Press USA Guild. It’s the first major academic publishing house to form a union with The NewsGuild-CWA. The unit is made up of approximately 150 editors, designers and sales and marketing staff who will be a part of the News Media Guild (TNG-CWA Local 31222).

Last Thursday, CWAers joined a national Hustle text bank to build support for the Build Back Better Act, a key piece of legislation which will create jobs, cut taxes, lower costs for working families, and make it easier for workers to join unions. Participants sent over 10,000 texts encouraging folks to call their members of Congress to support the Build Back Better Act.

Passing this legislation is critical in ensuring every worker gets paid fairly, has safe working conditions, and is able to organize to form a union without fear of retaliation. Take action to urge Congress to pass this bill by signing the petition and participating in the national phone bank this evening from 3-5pm PT/6-8pm ET. Find out more about upcoming actions here.

CWAers participated in a national Hustle text bank to build support for the Build Back Better Act. 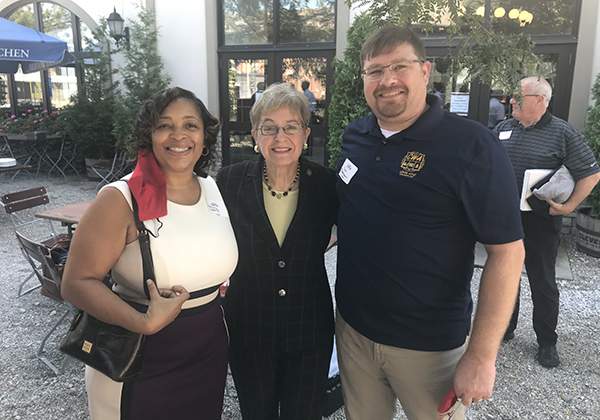 Last Friday, Dave Passalacqua and Adriane Weems from CWA Local 4340 met with Congresswoman Marcy Kaptur (D-Ohio) (center) to discuss critical pieces of legislation, such as the Build Back Better Act, as part of an event organized for labor leaders in Cleveland, Ohio.