For the People: More Choices for Voting

The ability to vote and to have a voice are critical to the health of our democracy. But laws regulating voting, the role of money in politics, and corporate lobbying have not kept up with changes in American politics.

The For the People Act addresses this problem. It is one of the most important bills that Congress will be considering, because under our current system, too many people have no real say in our government. Instead, the agenda is set by people who have the time to navigate confusing voting procedures and who have the money to hire expensive lobbyists.

Corporate executives want to keep things the way they are so they can keep calling the shots. They're doing whatever they can, including spreading misinformation about the bill, to hold on to their power.

To loosen the hold corporate money has on our country, we must build worker power, and to do that we need the For the People Act. Over the next few weeks, we will share information about how the For the People Act ensures that eligible voters can participate in elections and reduces the role of large donations in political campaigns.

Let's start with giving people more choices about where and when they vote.

In many states, the only way to cast a vote is to show up in person at a polling place during a limited timeframe on a single weekday. Often there are only a few polling locations, resulting in long waits. This means that only people who have flexible work schedules and who are physically able to endure a long wait can vote.

The For the People Act gives eligible voters in every state the ability to vote using secure methods like early voting, vote-by-mail, drop boxes, and absentee voting. This means that everyone will have a chance to vote for the candidates who they think would best represent them and to weigh in on ballot measures. It will be harder to exclude voters and manipulate results by limiting voting to a handful of hand-picked locations.

Tell Congress that it is time to update our voting system to give every eligible voter the chance to vote. Click here to send an email. 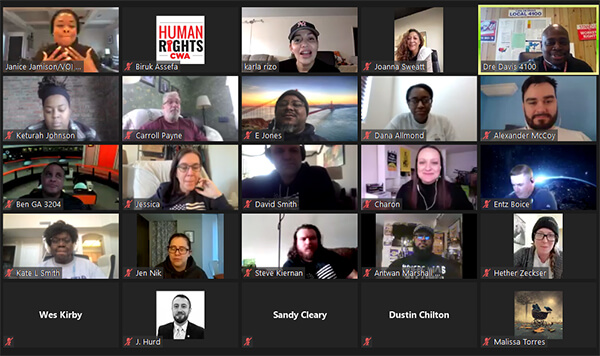 Congratulations to the newest class of military veterans who completed the CWA Veterans for Social Change training last week, conducted in partnership with the Veterans Organizing Institute (VOI) and Common Defense! The training provided eight CWA veterans the opportunity to gain critical skills and knowledge they can apply to ongoing CWA campaigns to build power for all working people.

Workers at Medium, including those in the engineering, editorial, design, and product departments, announced today that they are organizing to join CWA Local 9410 as part of the CODE-CWA (Campaign to Organize Digital Employees) initiative. The workers are calling for management to voluntarily recognize the union and commit to participating in a good faith relationship with the unit.

"We care about each other, we care about our work, and we care how our work impacts the Medium community. Together in our union, we can ensure Medium is a force for good, inside and out," said Lyra Naeseth, an engineer for Medium's Creator Platform Group.

"I joined our union because I really love working at Medium, and want to make sure that its workers have a seat at the table in decision making as the company continues to grow. I think Medium needs our union because all workplaces who value their teams need a union. A more democratic style of company benefits us all. I want our union to establish stronger baseline protections for workers," said Peter Slattery, an audience development editor at Medium.

On Monday, employees at the progressive news site Daily Kos announced the creation of the Daily Kos Guild, with the organization's management agreeing to voluntarily recognize their union. They will join the Pacific Media Workers Guild/CWA Local 39521.

In recent years, the digital progressive media and activism hub, which reaches over 18 million readers per month, has grown to more than 80 staffers across the country.

"Daily Kos, as a progressive organization, touts the ideals of labor rights and worker power, and we strongly agree," said Guild member Ntebo Mokuena. "But we believe these values can and should be better reflected and infused into every part of the work we do. During these difficult times, and as we look towards the future, we must ensure that our work remains sustainable and puts workers first."

Journalists at three Gannett-owned New Jersey publications – the Record (Bergen), the Daily Record and the New Jersey Herald – announced that they are joining the NewsGuild of New York/TNG-CWA Local 31003 on Wednesday. With nearly 90% of eligible staffers signed on, the Record Guild has requested voluntary recognition from management.

"The three papers represented by the members of our union have provided local news to northern New Jersey for more than 100 years," said Terrence T. McDonald, reporter with the Record. "In fewer than five years, Gannett has turned each into a shadow of their former selves. We organized to bring more power to the writers, photographers, and web producers who are dedicated to providing our communities with the journalism they deserve."

Jessie Gomez, a reporter at the Daily Record, said, "Journalists are never the story, but as we continue to see layoffs, poor healthcare benefits, and unequal pay, we can no longer stay silent. My colleagues, along with the communities we serve, are suffering. As a young Latina, I'm invested in North Jersey's diverse communities and after a year of racial reckoning, it's time we hold our leaders to their pledges for diversity and fair treatment of all. That starts with our newsroom."

The editorial staffers of the New York Daily News announced Friday that they are organizing with the NewsGuild of New York/TNG-CWA Local 31003. More than 80% of eligible staff are standing together to request voluntary recognition from Tribune Publishing, the News’ parent company.

"For 101 years, the Daily News has served as the watchdog and storyteller of New York City. Now, during a particularly precarious moment for media professionals and local news outlets, the editorial workers of The News seek job security, fair compensation, and a more diverse and inclusive newsroom that reflects the city's dynamic population," the workers said in a statement.

This week, a coalition of 17 attorneys general, led by Virginia Attorney General Mark Herring, urged the Federal Communications Commission (FCC) to further investigate Verizon’s proposed acquisition of TracFone. In a letter to the Commission, the attorneys general detailed how Verizon's acquisition of TracFone could negatively impact the Lifeline program, which provides a subsidy for communications services to millions of low-income consumers.

In a statement, CWA applauded the action by the attorneys general, emphasizing the need for further scrutiny on the proposed transaction to protect consumers.

"Verizon's acquisition of TracFone as it stands today could harm millions of low-income families during a pandemic," said CWA Senior Researcher Brian Thorn. "Now is certainly not the time to depend on the generosity of a corporation to continue providing communications services that millions of low-income Americans rely on. The FCC has a responsibility to step in and ask what Verizon will do to protect consumers from further consolidation of the wireless industry."

TracFone is the largest provider of Lifeline services nationally, with approximately 1.7 million low-income subscribers in 43 states and the District of Columbia, or 22 percent of total Lifeline subscribers. By contrast, Verizon only offers its mobile wireless service to Lifeline customers in parts of four states. TracFone’s critical role in providing Lifeline services could be undermined if the transaction is approved without binding conditions.

This week we honor the memory of Mario Garcia, a member of CWA Local 6132 who worked for AT&T in Austin, Texas.