Elected officials from Michigan, Ohio, Wisconsin, and Indiana released letters Wednesday calling on AT&T to suspend its job cuts and offshoring to support America's recovery from the COVID-19 pandemic.

"Many areas in the Midwest do not have access to the high-speed internet connections that have become indispensable for education, health care, remote work, and other services during the pandemic," said CWA President Chris Shelton. "AT&T's union workforce and its commitment to universal service was the bedrock for economic growth and stability for millions of Americans. It's time for AT&T to show that it is ready to build back better from this pandemic. If AT&T's executives truly care about their employees, their customers and our country, they will end these job cuts and build the next generation of broadband across America using their skilled, dependable union workforce."

Government officials are growing increasingly frustrated with AT&T's lack of transparency. Earlier this month, the Mississippi Public Service Commission issued a subpoena to force AT&T to disclose how many people had benefited from $284 million the company received from the federal Connect America Fund to expand access to broadband in rural areas. The commission has received complaints from rural residents who do not have access to broadband service.

The training covered the unique role of service members in the working class; people-powered social justice efforts; how to craft, deliver, and present resonant messages; grassroots organizing; lobbying; and more. The CWA veterans in this program will continue to apply their knowledge and skills from the training to various ongoing campaigns, including supporting CWA-endorsed candidates in the 2020 elections.

The training was conducted in partnership with Common Defense and the Veterans Organizing Institute.

Military veterans from across CWA completed the first ever CWA Veterans for Social Change Training Institute last week to develop and organize a broad base of CWA activists who are veterans or currently serving in the military.

With just six days left to extend the critical payroll support program (PSP), a provision of the CARES Act that has kept thousands of aviation workers on payroll, CWA members are mobilizing across the country to put pressure on Senators and Republican Senate Leader Mitch McConnell to take action. CWA passenger service agents and AFA-CWA Flight Attendants are among those whose jobs are at risk if the program isn’t extended.​

This week, Roger Wicker (R-Miss.) and Susan Collins (R-Maine) introduced the Air Carrier Worker Support Extension Act of 2020 to address this crisis. An attempt to move the bill quickly on Wednesday night failed when Republican Senators Pat Toomey (Pa.), Rick Scott (Fla.), and Rand Paul (Ky.) utilized an obscure Senate rule that required unanimous approval of all 100 Senators for it to pass. The bill is unlikely to move forward as a standalone bill, and we need to keep the pressure on to make sure that a bill including protection for airline workers' jobs, public health, and critical public services is passed quickly.

A group of about 30 CWAers rallied outside of Colorado Senator Cory Gardner's downtown office to make sure Gardner knows that his constituents are expecting him to do everything he can to get the PSP program extended and save thousands of aviation jobs.

"Rodrigo Duterte's brutal regime is using the pretext of a so-called 'Anti-Terrorism Law' to ramp up efforts targeting labor organizers, workers, and political opponents," said Rep. Susan Wild (D-Penn.), the lead sponsor of the legislation, on the House floor. "This law allows suspects to be detained by the police or military without charges for as long as 24 days and placed under surveillance for up to 90 days. Let us make clear that the United States will not participate in the repression. Let us stand with the people of the Philippines."

"We cannot stand idly by while Duterte kills labor activists one by one," said CWA's Senior Director for Government Affairs and Policy Shane Larson. "We must condemn it, and do every single thing within our power to stop it. And that starts with mobilizing to enact legislation like the Philippine Human Rights Act. CWA is committed to battling against the sorts of egregious labor and human rights abuses that are the reality facing the Filipino people under the Duterte regime and we are proud to be in this fight with all of you."

CWAers are Fired Up to Beat Trump and Retake the Senate!

No prior phonebank experience is necessary to participate. CWA volunteers get together on Zoom for training and practice time at the beginning of each shift and check in with each other during the phonebank to provide support, answer questions, and celebrate our progress.

Volunteer events are happening almost daily across the districts. To join the movement, sign up here. 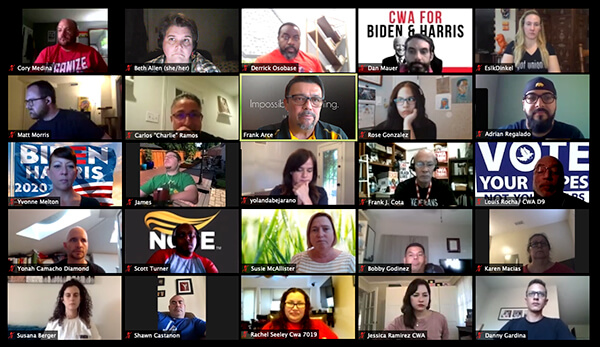 Last week, Fair 5G, a CWA project, held a webinar exposing Verizon's empty promises regarding the 5G rollout in San Diego. On the webinar, Vice Presidents from both the San Diego Unified School Board and San Ysidro School Board shed light on how the digital divide continues to affect students during this all-virtual school year, and why they believe 5G was never meant to reach their school communities.

How We Can Fix Our Broken Senate

It is clearer than ever that the U.S. Senate is badly broken and needs to be fixed.

The House of Representatives has passed hundreds of bills that would help working families, but Mitch McConnell has blocked them all. Right now, tens of thousands of airline workers face layoffs and our state and local governments are grappling with enormous deficits because McConnell won't act.

Even if Democrats win the Senate next year, McConnell and Senate Republicans are prepared to use the filibuster to block every attempt to make progress on the many issues facing our nation.

It doesn't have to be that way. The Senate sets its own rules for the legislative process, and those rules are routinely updated. To strengthen our democracy, we must end the filibuster.

RSVP here to join us along with Senator Jeff Merkley and Senator Elizabeth Warren and allies from across the progressive movement on Wednesday, September 30, for a live discussion on what we need to do to end the filibuster and fix the Senate.