The tentative agreement provides for pay raises, affordable healthcare, and a guarantee that a share of AT&T Mobility customer calls will continue to be handled by experienced, well-trained CWA customer service representatives located in the Southwest.

"I am proud of our CWA bargaining team for negotiating a strong contract that protects good, family-supporting jobs in the Southwest," said CWA District 6 Vice President Claude Cummings. "CWA members at AT&T Southwest Mobility proved that they were willing to fight for their jobs, affordable healthcare and better wages by overwhelmingly voting to strike if necessary. That, along with their months of workplace mobilization activities, pushed the company to reach this agreement in a timely fashion."

Details of the proposed contract are being provided to members, and a ratification vote will be held once they have an opportunity to review the details of the agreement.

Bargaining opened on February 24 for more than 13,000 AT&T West workers, and CWA members are prepared to win an improved contract that includes wage increases, benefit protections, and a commitment to keeping good, family-supporting jobs in the region. The current contract expires on April 4, 2020, and covers wireline technicians and customer service representatives in California and Nevada.

"AT&T West workers built this company and we are proud of AT&T's historic role in providing universal service, but the company is failing to invest in its network and in the experienced, well-trained, union employees who make that network great," said CWA District 9 Vice President Frank Arce. "Instead AT&T is spending its billions on buying back its own stock to jack up the price and please large shareholders. We are ready to be part of AT&T's future, and help build next-generation networks everywhere people need service. It's time for AT&T to invest in us and our communities."

AT&T has continued to cater to the demands of controversial vulture hedge fund Elliott Management, which purchased a small stake in AT&T in September 2019. Elliott is pushing AT&T to extract profits from the company by cutting jobs, outsourcing work, and selling off assets. Credit-rating agency Moody's has raised concerns that the large cost of the stock buyback plan puts AT&T at risk for a credit downgrade. 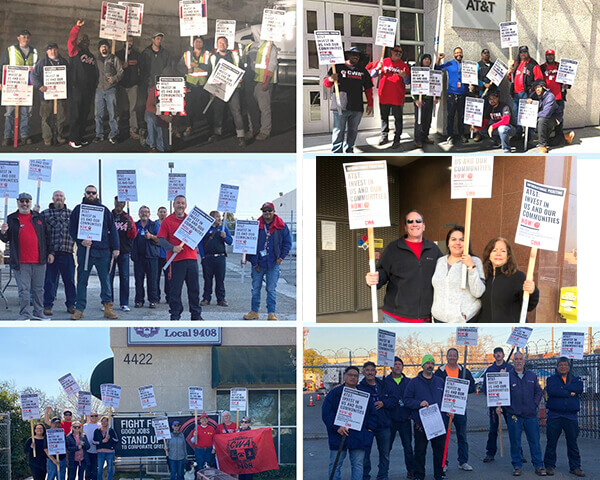 Bargaining opened on February 24 for more than 13,000 AT&T West workers, and CWA members are prepared to win an improved contract.

Newly-organized 9-1-1 dispatchers in Blue Springs, Mo., members of CWA Local 6360, ratified a first contract including grievance rights, a pay increase for all members ranging from 4.25 to 5.5 percent, and more. 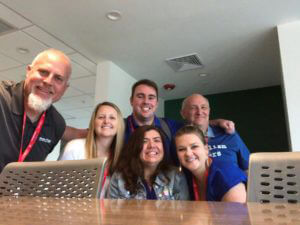 On Monday, journalists at The Naples Daily News, The News-Press, The Banner, and the Marco Eagle announced they are joining NewsGuild-CWA.

On Monday, journalists at The Naples Daily News, The News-Press, The Banner, and the Marco Eagle announced they are joining NewsGuild-CWA as the Southwest Florida News Guild.

A delegation of the union's organizing committee presented local management with a letter requesting voluntary recognition from the newspapers' parent company, Gannett, which would pave the way for contract negotiations.

The Southwest Florida News Guild would cover more than 50 reporters, photographers, planners, producers, news assistants, and columnists across the two newsrooms that produce the publications.

A mission statement, written by the group's Organizing Committee, details financial woes and impacts on working conditions resulting from a corporate merger between Gannett and GateHouse Media.

"This has taken a toll on our working conditions," they wrote. "We have lost skilled journalists, and in many cases their positions have not been filled. That makes it difficult for us to maintain the level and quality of coverage our communities deserve. Both newspapers' employees find hope in their future," they wrote. "They hope you do too."

This week, staff at the Indivisible Project, an organization built to work for and support thousands of grassroots groups across all 50 states in the fight for real progressive change, filed a petition with the NLRB to join the Washington-Baltimore News Guild/CWA Local 32035.

Because employees believe the Indivisible Project has an obligation to embody its values, they are requesting for leadership to voluntarily recognize the union.

9-1-1 dispatchers in Lee's Summit unanimously voted to join CWA Local 6360 in an election held by the Missouri Board of Mediation.

In a memo that was recently made public, President Donald Trump has given Defense Secretary Mark Esper the power to prevent 750,000 civilian Defense Department workers from joining unions to negotiate collective bargaining agreements.

Esper did not request this authority and has not indicated that existing collective bargaining agreements have prevented the Defense Department from carrying out its mission. Instead, Trump's actions seem to stem from a White House memo that suggested eliminating all job protections for federal workers as part of a strategy to weaken union member power.

CWA Local 1298 flooded Hartford with red this week to fight for Connecticut's call center jobs! Local 1298 President David Weidlich, Vice President Chuck Borchert, and other CWA members testified at a Labor Committee Public Hearing about the need for the Act Concerning Call Centers and Notice of Closures (H.B.5273), a bill to keep call center jobs in Connecticut and to stop companies that move jobs out-of-state from getting tax breaks.

"The core of this bill is simple," said Weidlich. "No taxpayer money should be used for companies that continuously ship our jobs out of the state."

For his testimony, Borchert read two letters written by AT&T call center workers whose jobs were moved from Meriden, Conn., to Georgia and Tennessee last year, forcing them to choose between moving out of state or losing their jobs.

"My future plans are very uncertain at this time due to this layoff," wrote Meredith Arnold, who lost her job because she was unable to make the move to another state. "My ability to help my children pay for college is compromised, and my retirement plans are completely derailed as I was laid off two and a half years prior to being retirement eligible."

CWA's National Civil Rights & Equity Committee and the National Women's Committee held their annual planning meeting in Baltimore, Md., last week. The Committees used this time to develop strategies for educating, engaging, and mobilizing members around social and economic justice issues. Attendees developed action plans to increase the number of local human rights committees in each District, Sector, and Division. The Committees also discussed methods to inform members about the importance of being counted in the 2020 Census and building solidarity with grassroots organizations including the Poor People's Campaign. 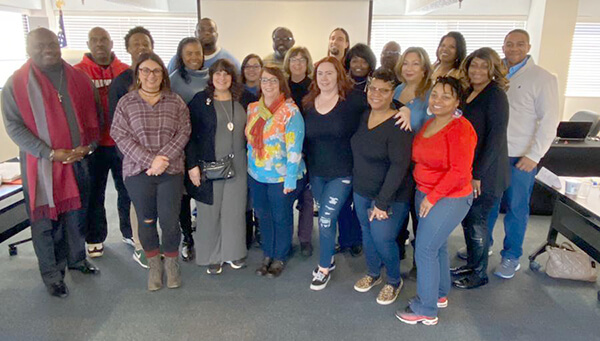 Most employers are required to post the OSHA Summary of Work-Related Injuries and Illnesses in all workplaces/reporting locations each year from February 1 through April 30. This summary form lists the total number of work-related injuries and illnesses that occurred during the previous year and must be posted in a common area where notices to employees are usually posted.

Employees and union staff and leaders also have the right to access more detailed logs of workplace injuries and illness, which can be helpful to CWA leaders and activists who are assessing the need for more investigation into health and safety issues and to prioritize prevention strategies.

Learn more about OSHA reporting requirements and forms at cwa.org/osha-injury-and-illness-data.