The CWA Local 1298 bargaining committee reached a two-year tentative agreement with Frontier for the company's employees in Connecticut.

Over the past several months, the bargaining committee faced the challenge of bargaining a contract without givebacks despite Frontier's financial challenges. CWAers held firm and the agreement includes job security with a guaranteed job offer for all, a general wage increase, two title upgrades, and more. 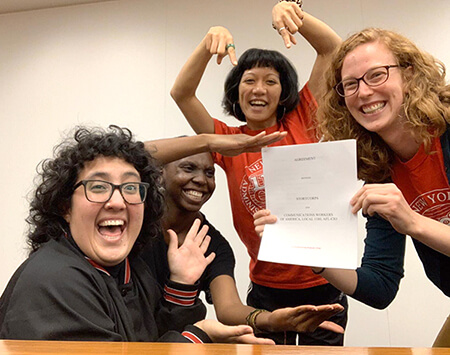 After nearly two years of bargaining, CWA Local 1180 members at StoryCorps reached a tentative agreement on a first contract including wage increases and improvements on vacation time, remote work, health insurance, and more.

Citing the importance and urgency of building worker power, the CWA Executive Board voted unanimously to make supporting the Protecting the Right to Organizing (PRO) Act a litmus test for 2020 incumbent political candidates to receive a CWA endorsement.

"If a sitting Member of Congress or a Senator doesn't vote for the PRO Act to expand workers' rights, they won't receive an endorsement for reelection from CWA in 2020," CWA President Chris Shelton said. "The stakes have never been higher in this election for workers. All incumbent House and Senate candidates seeking the support of CWA members who are gearing up to knock on thousands of doors, make phone calls, and get out the vote must fight to pass this crucial piece of legislation. Our future depends on it."

The PRO Act will give CWA members and all workers more power to win better wages, benefits, and working conditions. It will protect strikers, make it easier for workers to join unions, prevent the misclassification of workers as independent contractors, deal a blow to "right-to-work" laws, and much more.

Wondering if your Member of Congress supports the PRO Act and other CWA priority legislation? Check out our NEW Congressional Scorecard! The scorecard is a resource for CWA members to educate themselves on where their elected officials stand and hold them accountable if they don't side with working people.

Corporate lobbyists have spent decades weakening our laws to keep the balance of power tilted in favor of CEOs and the super-rich. Without worker power, the 1% gets richer while our wages stay stagnant, our working conditions get worse, and our economy stays rigged in favor of the wealthy.

The Protecting the Right to Organize (PRO) Act, H.R. 2474, would give CWA members more power to win the wages, benefits, and working conditions we deserve. It would protect strikers, make it easier for workers to join unions, prevent the misclassification of workers as independent contractors, deal a blow to "right-to-work" laws, and a lot more.

Last week, CWAers across the country participated in a National Day of Action by making calls to Congress urging them to side with working people over corporations and pass the PRO Act. The pressure is working! This week, the bill picked up bipartisan support, with Republican Reps. Brian Fitzpatrick of Pennsylvania and Chris Smith of New Jersey joining 214 House Democrats in cosponsoring the bill.

Ask your Member of Congress to support the PRO Act now.

Safe Staffing in New York State Would Save Lives

CWA members rallied outside a New York State Department of Health hearing to inform the public about the importance of establishing safe staffing ratios to improve patient safety and the quality of care in hospitals and nursing homes. CWA members also testified at the hearing in support of safe staffing.

CWA members rallied outside a New York State Department of Health hearing to inform the public about the importance of establishing safe staffing ratios to improve patient safety.

CWA members who work at New Flyer in Minnesota traveled to the American Public Transportation Association (APTA) conference in New York City last week to deliver a letter to Chris Stoddart, the President of the bus division of New Flyer Industries, urging him to negotiate a Community Benefits Agreement to create better jobs, equal opportunity, and healthier communities for workers across the country.

Community Benefits Agreements have been used in recent years to ensure that taxpayer-funded investment centers on worker and community needs. More than 60 percent of New Flyer's income comes from taxpayer-funded purchases of their products.

The coalition of CWA, IUE-CWA, and community, labor, civil rights, and environmental groups that delivered the letter also gave Stoddart a copy of a new report from Jobs to Move America that details worker complaints about racial discrimination and sexual harassment and concerns about health and safety at a non-union New Flyer factory in Anniston, Ala.

At the conference, CWAers shared their stories about how getting a union in their workplace helped them unite and tackle issues more effectively, and talked about how they want more workers to have a voice on the job without fear of retaliation, including the workers at the Anniston plant. With the help of their union, the Minnesota CWA members won significant limitations to forced overtime, a major new heat stress policy and safer work processes, wage increases, and more inclusive treatment.

CWA members at New Flyer in Minnesota shared their stories about how getting a union in their workplace helped them unite and tackle issues more effectively, and talked about how they want more workers to have a voice on the job without fear of retaliation, including the workers at the Anniston, Ala., plant.

CWA celebrated the life and legacy of President Emeritus Morty Bahr at an event in Washington, D.C., on Wednesday. 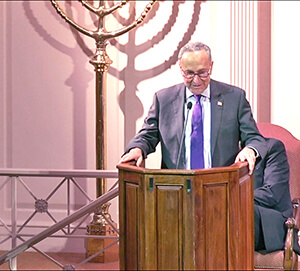 Senate Minority Leader Chuck Schumer, whose mother-in-law was a CWA member, attended the event and paid tribute to his long, personal relationship with Bahr.

Bahr, who passed away in July, started his career as a telegraph operator and led CWA for 20 years during some of the industry's most tumultuous times, helping workers adapt and protect themselves through the difficult transition to the digital era. His vision ensured that the union would continue as an advocate for working men and women long into the future, across communications, information technology, and other sectors.

After sharing his own remembrances, CWA President Chris Shelton read remarks from Speaker of the House Nancy Pelosi. "During his more than five decades of service and leadership of CWA, Morty worked tirelessly to lift up America's workers, which are the backbone of our democracy and the foundation of our strength. His transformative leadership at the helm of CWA helped take the industry and its workers into the future," Pelosi said.

Senate Minority Leader Chuck Schumer, whose mother-in-law was a CWA member, attended the event and paid tribute to his long, personal relationship with Bahr. "I always tried to do whatever I could for Morty. I would move heaven and earth for him, not just because he represented a great union that had helped my family so much, and not just because I believed in the union movement, not just because he came down the road from me in Brooklyn, not even because he looked out for me before anyone else did. I would do anything he asked because you knew when he asked you to do it, he was doing it because it was the right thing to do," Schumer said.