"President Trump has promised that 'we will cut taxes tremendously for the middle class.' The truth is, this plan is a billionaire's dream masquerading as a tax cut for middle class families.

"Instead of funding programs that support working families, President Trump and Republican leaders are pushing steep cuts in tax rates that primarily benefit the wealthiest Americans and corporations.

"The idea that corporations will use these cuts to create jobs in the U.S. is laughable. Many U.S. corporations already pay taxes at a rate lower than that proposed by the Trump plan. Instead of investing in and creating good U.S. jobs, these corporations have slashed employment and are sending jobs overseas or to low-wage contractors. Any corporate tax cut will only further pad the bottom line of executives and top stockholders.

"For months, we've seen the White House and Republican leadership in Congress work furiously to try to cut Medicaid, health care, and other programs that working families depend on, to finance a big tax giveaway to corporations and the wealthy.

"Unfortunately, if this tax plan becomes law, we will see those attacks intensify, as revenue declines and our government finds itself unable to pay for repairs to crumbling roads and bridges, for disaster relief and first responders, and for the public services that are critical to our lives.

"Rather than benefiting from 'the biggest tax cut ever,' working and middle class families will be shouldering the costs. That’s not a plan working people can support."

The Trump Tax Cuts By the Numbers

The Republican leadership and Trump administration are working overtime to sell their tax plan as a big tax cut for middle class families.

Take a closer look at the numbers. That claim just doesn't add up.

CWA President Chris Shelton is urging CWA locals and members to help CWA members and their families in Puerto Rico, the U.S. Virgin Islands, and Florida, who have suffered devastating damage from recent hurricanes.

Especially hard hit is Puerto Rico, where Hurricane Maria left countless homes damaged or destroyed. Residents are expected to remain without water or power for weeks or months. Communications remain spotty as CWA members work around the clock to restore mobile phone services.

There are two ways members can help.

It will take many months for CWA families to recover from these hurricanes and their aftermath. We need everyone's help today to respond to this humanitarian crisis and assist our brothers and sisters.

Getting It Done in Jackson

CWA members in Jackson, Miss., are celebrating the end of two years of harsh furloughs. To balance the budget at the end of 2015, the former mayor initiated a two-day per month furlough for city workers. For Jackson city workers, this was equivalent to a nearly 10% wage cut.

MASE/CWA Local 3570, in conjunction with the Public, Healthcare, and Education Workers department, launched a campaign to challenge the furlough. Monthly actions pressured City Hall, and the campaign inspired over 50 new members to join CWA.

In the spring of 2017, then Mayoral candidate Chokwe Lumumba announced his opposition to the furlough, and CWA activists worked hard for his election. CWAers attended a Political Activist Bootcamp for city workers, knocked on hundreds of doors, and staffed phone banks. CWA was the only union to endorse Lumumba prior to the all-important Democratic primary.

"We are excited to announce the elimination of the furlough effective October 1, 2017," said Mayor Lumumba. "We have a progressive vision for our city, one that includes treating city employees with the dignity and respect they deserve. Ending the furlough allows us to demonstrate our commitment to and appreciation of our hard-working city employees."

CWA Public, Healthcare, and Education Workers Vice President Brooks Sunkett said the end of the furlough will spur further and deeper organizing in Mississippi. "Ending the furlough is just the first step. We won't stop until all public sector workers in Mississippi have rights on the job. His decision to end the furlough shows that Chokwe Lumumba is leading a new era for workers’ rights in the South." 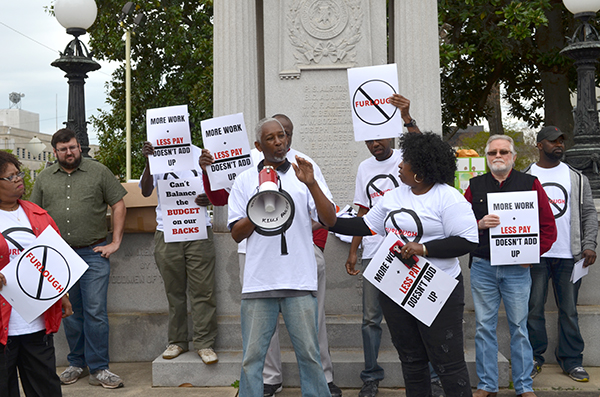 Today's decision by the U.S. Supreme Court to hear the Janus v. AFSCME case continues the campaign by corporate interests and right wing groups to restrict the ability of working people to stand together. These groups have been plotting for decades to take away workers' freedom to join together and negotiate for fair wages and benefits, and to improve our workplaces.

Labor law requires that a union, chosen by the majority, represent every worker in a bargaining unit. While no worker is required to join a union, workers can be required to pay their fair share for the cost of the representation – the cost of bargaining higher wages and benefits and the cost of representing a worker through the grievance system. The right-wing attack on fair share is all about weakening unions, with the hope of giving corporations even more power and accelerating the assault on achievements like Social Security, civil rights, wage and hour and safety laws, Medicare, and public education that unions fight every day to preserve.

We hope that the Supreme Court sees through this latest attack on the freedoms and rights of working people and deals with the issues in the Janus case fairly.

No matter how the Court decides, CWA members will meet the challenge and do everything possible to strengthen our union and withstand the attacks on our very right to exist. CWA locals are bringing more members into our union to strengthen our voice at the bargaining table and at every level of the political process. That's what CWA STRONG is all about.

It appears that the Republican leadership has failed in their latest attempt to repeal the Affordable Care Act – for now.

Republicans have been campaigning on "repeal and replace" for seven years, but they have never come up with an actual plan to replace the ACA that improves access to health care. The new bill, called Graham-Cassidy, was the most shameful proposal yet.

Their latest health care repeal bill would have raised costs, gotten rid of protections for people with pre-existing conditions, drastically changed how our entire health care system works, and eliminated coverage for millions of Americans. It would have put an 'age tax' in place, requiring older Americans to pay thousands of dollars more, it would have made health care bargaining much more difficult, and it would have slashed Medicaid.

The latest GOP failure shows that mobilization works. CWA members have been e-mailing, calling, and showing up in legislators' offices for months to let them know that these changes are unacceptable. It's only because of the loud public outcry that millions of people won’t be thrown off their health care plans.

But the fight isn’t over. We've seen the Republicans get within one vote of repealing the ACA, and with the Republicans in control of both houses of Congress, we know they will try again. CWAers fought hard to kill this attempt to repeal the ACA, and they'll be on the front lines if and when the GOP tries again to strip health care access from millions.

Activists and members of CWA Local 3122 were the critical force in electing Annette Taddeo (D) to the Florida State Senate. The special election was Sept. 26.

Taddeo's opponent, a former contestant on the television show "The Apprentice" and a supporter of President Trump, outspent her by more than $1 million. But worker-to-worker contact made all the difference, and Taddeo was elected in a historically Republican district by a 51-47 percent margin.

The Senate special election was held following the resignation of Frank Artiles (R-40). Artiles had made racist comments but was refusing to resign. CWA joined community and faith leaders in protesting Artiles and demanding his resignation. 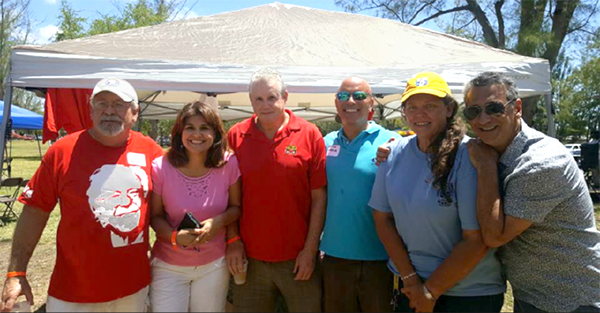 Workers at M&R Strategic Services voted overwhelmingly to join the Washington-Baltimore Newspaper Guild, TNG-CWA Local 32035. There are 82 unit members at the online advocacy company with offices in New York and Washington.

Workers fought back against an intense employer anti-union campaign, including an unsuccessful effort to label 19 workers as supervisors to exclude them from the bargaining unit. 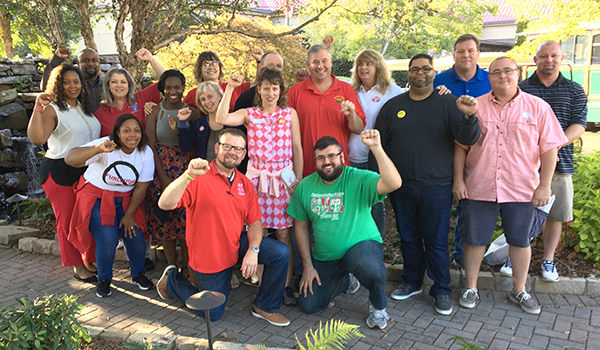 Thirteen organizers from District 3 locals met in Atlanta to brainstorm about internal and external organizing throughout the District. CWA District 3 VP Richard Honeycutt said, "As the CWA STRONG initiative spreads, there is a new spirit of organizing in District 3. With the team of organizers we have in our district, there is no doubt that we will meet and even exceed our goals in the Southeast. Our organizers are excited, I’m excited, and together we will grow and strengthen our union." 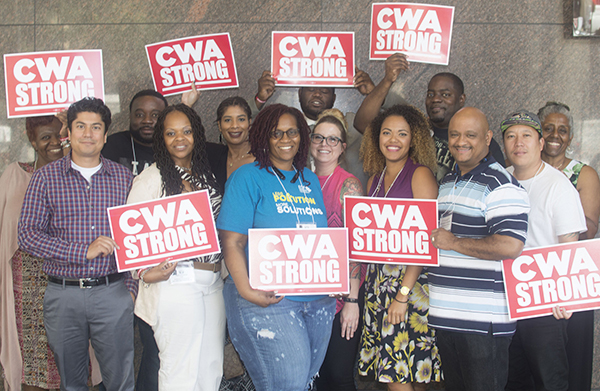 This year's class of Minority Leadership Institute participants met for the first of two weeks of intensive sessions this week at CWA headquarters. The program, organized and conducted by the CWA Human Rights Department, included workshops and instruction to support activists and leaders as they organize, mobilize, and challenge members to make our union CWA STRONG.

Mark Your Calendar for Customer Service Week of Action

CWA's Customer Service Week of Action starts October 15. The theme is "End CEO Hocus Pocus: Stop Offshoring and Outsourcing Good Jobs." CWA D7 Vice President Brenda Roberts and the Customer Service Advocacy Committee have put together an action program for CWAers which includes a petition drive to support AT&T Mobility workers in negotiations for a fair contract and a letters to the editor campaign to raise awareness about the offshoring and outsourcing of good jobs in our communities.