When ordinary Americans learn more about “fast track” authority and the Trans-Pacific Partnership, they recognize it as a bad deal for workers’ jobs and wages, small business, food safety and the environment.

This trade deal has been negotiated in secret for nearly four years. Now, as the multinational corporations and trade negotiators are closing in on the final round, they’re pushing for “fast track” authority, which would block Congress from amending or improving the deal in any way. The House and Senate would be limited to an up-or-down vote on the entire package.

CWA and a diverse group of allies has been shining a bright light on the secrecy surrounding the TPP and 600 corporate advisers who have access to all the texts while members of Congress, unions, and all public interest groups can only speculate about what this massive trade deal would do to working and middle class families.

Now, a national, bipartisan public poll sponsored by CWA, the U.S. Business and Industry Council and the Sierra Club confirms that when voters hear what the TPP is all about, they strongly oppose this deal. 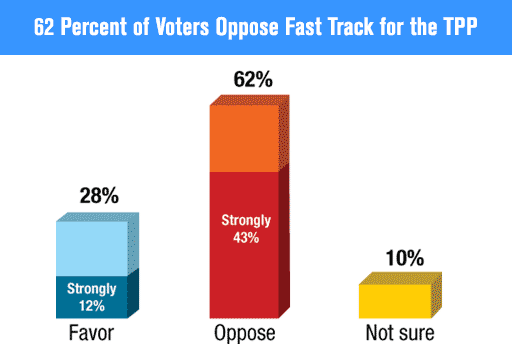 Voters overwhelmingly expect the TPP to be a good deal for large corporations. And they’re right. The TPP is a giveaway to multinational corporations. Not only will corporations move manufacturing jobs to countries like Vietnam, where the minimum wage is 28 cents an hour and the average wage is 75 cents an hour, but service sector jobs will be sent offshore too. 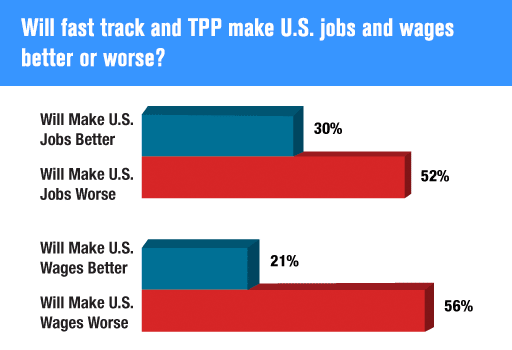 We’re in the middle of a David vs. Goliath battle. Corporate lobbyists are waging a fierce campaign to get this trade deal rushed through Congress with little debate. But a broad coalition has come together to take on Goliath. CWA has joined with a growing network of environmental and consumer groups, small business, community organizations and others, coordinating actions that are pushing members of Congress to say no to fast track.

American voters don’t want a $1 trillion trade deficit, that’s the difference between what the U.S. exports compared to imports. We  are tired of stagnant wages and jobs moving overseas. Instead of trade policies that give corporations more power than governments, we need policies that help restore the American Dream.
National survey of 816 U.S. registered voters was conducted Jan. 14-18, 2014 by Hart Research and Chesapeake Beach Consulting.