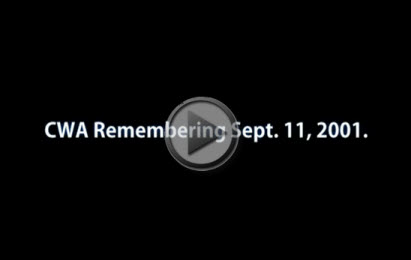 This CWA video reflects on the great loss of our CWA, NABET-CWA and AFA-CWA members who were on the job at the Pentagon, at the Port Authority in New York, on top of the twin towers manning TV transmitters and in the skies when they lost their lives.

It also shows our great pride in the efforts of so many ordinary people, including thousands of CWA members, who stood together and became real heroes.

CWA operators took calls from workers in the twin towers and passengers on the doomed planes and relayed those messages to loved ones. CWA nurses and other volunteers cared for injured victims of the attacks in hospitals and makeshift centers. CWA Verizon and other telecom members worked around the clock to get New York and Wall Street connected again to the world, and in just one week, built a telecommunications system from the ground up for 3,000 Pentagon workers relocated after the attack.

On this 10th anniversary, we honor our CWA heroes and remembers those who lost their lives much too soon.