Spread the word about Verizon outsourcing and offshoring jobs.

Verizon could be leading the way on America’s economic recovery. Instead, they’re contracting out and sending overseas customer sales and service, billing and many other types of jobs. 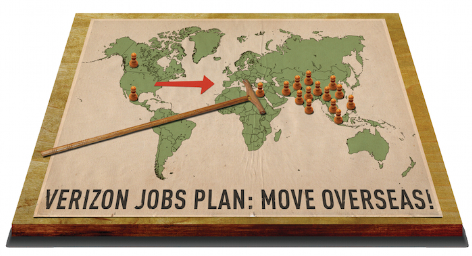 For DSL tech support alone, 2,600 jobs are done in Mexico, India, Canada, and the Philippines. And in addition to sending several thousand jobs overseas, Verizon has started using contractors to do more and more work. More Fiber Solutions Center jobs are contracted out than done in-house.

“American companies want American profits but they don’t want to pay American wages — and that should be stopped.”

Other jobs that are no longer done by Verizon employees but are instead outsourced to lower-wage contractors from outside or inside the U.S. include:

service and other specialized home services

This can come with a price higher than job losses. Recently, contractors in Rockland County, New York, dug into a gas line and caused a large explosion— destroying several homes, injuring four people and landing two volunteer firefighters in the hospital.

Major Win for CWA in San Diego on Subcontractor Transparency