As Santander faces growing scrutiny for discriminatory and predatory lending practices, bank workers from across the country descended on the Boston headquarters on Monday to demonstrate the growing movement of opposition the bank faces over unethical banking practices and poor working conditions.

The Committee for Better Banks, a project of CWA, is mobilizing bank workers nationwide to improve conditions in the banking industry.

"As a teller at Santander, I know firsthand the pressure that low-wages and unreasonable sales goals put on frontline workers," said Juan Rojas, a teller based in New York City. "I've worked at Santander for over 3 years, but I still make less than $13 an hour, and I made about $12.50 when I started. Whenever I ask my manager about why we make so little at one of the world's most profitable companies, he just tells me I have to sell more if I want to make more. Since I won't push products on customers that don’t meet their financial needs, I know that my best hope for real change comes from joining my coworkers and demanding a union."

The protest comes on the heels of a report from the Committee for Better Banks finding discrimination in the bank's mortgage lending practice. In response, eleven Senators—including Sen. Warren, Sen. Booker, and Sen. Gillibrand—sent a letter to the Office of the Comptroller of the Currency demanding further investigation into racial and economic bias at the bank.

As Santander's annual meeting approaches next month, workers and members including CWA activists and the Committee for Better Banks are calling on executives and shareholders to address the failures of Santander operations in the U.S. to meet the same standards of worker and customer protections it does abroad. This weekend, hundreds of bank workers across the Committee for Better Banks met in Boston to plan the next phase of their organizing efforts, expand the network of Santander workers in the U.S. and abroad, and plan the message they intend to send to Santander shareholders ahead of their annual meeting next month. 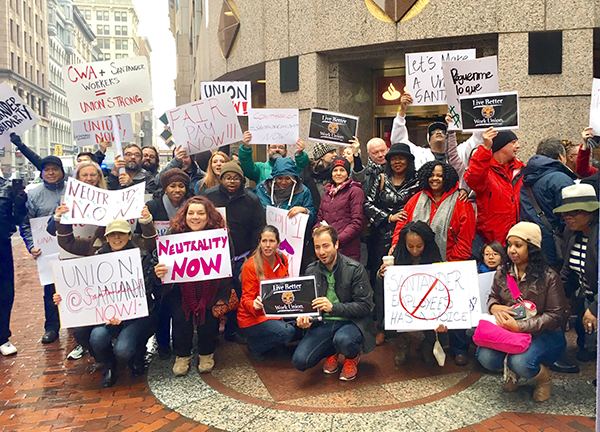 Bank workers from across the country descended on the Santander Boston headquarters on Monday to demonstrate the growing movement of opposition the bank faces over unethical banking practices and poor working conditions.