Yesterday, the U.S. Senate confirmed Jennifer Abruzzo as the new National Labor Relations Board (NLRB) General Counsel. Abruzzo, who was nominated by President Joe Biden for the post, served as the Special Counsel for Strategic Initiatives at CWA before her confirmation, and has many years of experience working for the NLRB in various roles, including Acting General Counsel and Deputy General Counsel.

The NLRB General Counsel plays a critical role in setting the agenda for the NLRB and determining which cases it will pursue. The Trump Administration’s General Counsel, union-buster Peter Robb, cut the NLRB’s budget, reduced staff, and implemented policies that made it more difficult for NLRB lawyers to investigate worker complaints and pursue unfair labor practice charges.

No Republican Senators supported Abruzzo’s confirmation, resulting in a tie vote which was broken by Vice President Kamala Harris.

Today CWA and 40 other organizations launched the Worker Power Coalition, to push for the Senate to pass the PRO Act. New polling from the coalition shows overwhelming support for the PRO Act in states that are political battlegrounds or otherwise important to secure majority support in the Senate for the PRO Act.

“It’s time for the Senate to pass the PRO Act to give working people the tools they need to regain power at work,” said CWA President Chris Shelton. “The PRO Act will impose serious penalties on corporations and CEOs that retaliate against workers who speak up to improve their working conditions and make it easier for workers to join together in unions to negotiate better pay and benefits and time off to spend with their families.”

For more information on the coalition and the poll visit passtheproact.org.

Next week, on Wednesday, July 28, and Thursday, July 29, CWA members and retirees will be calling voters in Arizona, Alaska, and Virginia to ask them to urge their Senators to do the right thing and get the PRO Act passed.

You'll need a laptop and phone or smartphone to make the calls. RSVP at CWA.org/PROActPhonebank to receive information via email on how to join! 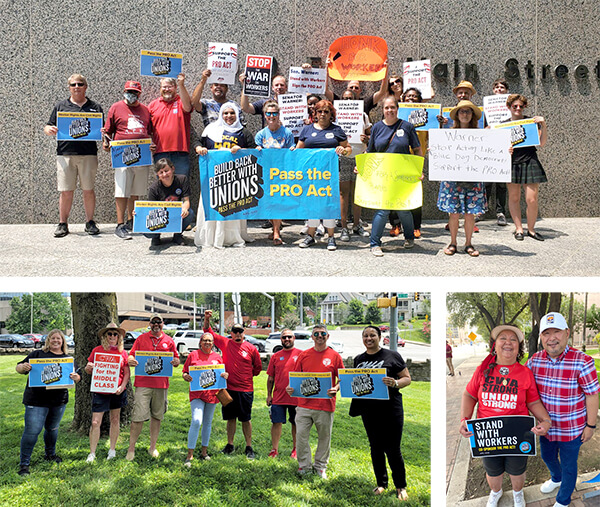 CWA members are joining other workers at actions outside of all 100 U.S. Senators' offices this week to urge them to pass the PRO Act. Find an action near you at actionnetwork.org/event_campaigns/proact-woa.