CWAers Continue to Fight to Fully Fund the NLRB

On Tuesday, CWA Secretary-Treasurer Sara Steffens joined prominent Democratic lawmakers and leaders of other unions to participate in a press conference organized by the Worker Power Coalition calling on Congress to fully fund the National Labor Relations Board (NLRB). Steffens, who also serves as Co-Chair of the Worker Power Coalition, said, “As someone who was fired for union organizing, I know firsthand how dangerous it is to leave union-busting CEOs unchecked. Whether it’s Starbucks workers in Memphis, an Amazon warehouse worker in New York, or a Verizon retail worker in Seattle, the fact is that far too many workers are being fired for exercising their right to form a union and demand the better working conditions they have earned. The NLRB must receive the full funding it needs to hold these billionaire CEOs accountable.” Representatives Alexandria Ocasio-Cortez (N.Y.), Ro Khanna (Calif.), Ilhan Omar (Minn.), Jamaal Bowman (N.Y.), and Andy Levin (Mich.), as well as International Union of Painters and Allied Trades President Jimmy Williams, were among the other speakers at the press conference.

The NLRB has seen a huge uptick in the number of filings for union elections and investigations into labor law violations, but has not seen a funding increase since 2014. Unless Congress steps in to give the NLRB the funding it needs to function, its ability to protect workers is in danger. That is why CWAers across the country are raising awareness about this gap in funding and calling on Congress to act.

The same day as the press conference, Jesse Mason, a former Specialist at Verizon Wireless, who was illegally fired after joining with his coworkers at Seattle’s Northgate and Aurora Village stores to organize a union with CWA, spoke about his experience during the Congressional Labor Caucus’ briefing on funding the NLRB. “If the NLRB was properly funded, workers like myself would not have to wait around for our cases to be heard. There needs to be real repercussions for companies who purposefully break the law. Congress must ensure the NLRB is properly funded in the upcoming budget so it has the resources it needs to hold companies accountable and ensure workers can organize,” said Mason.

Workers across the country are taking action by sending a message to their Senators and Member of Congress. Click here to send your own message. 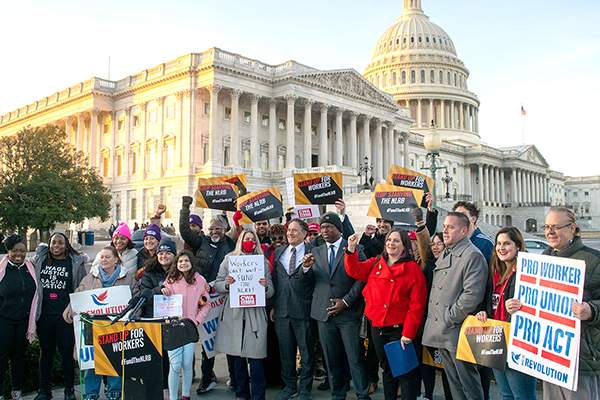 CWA Secretary-Treasurer Sara Steffens joined prominent Democratic lawmakers and leaders of other unions to participate in a press conference organized by the Worker Power Coalition calling on Congress to fully fund the NLRB.

CWA airport workers joined thousands of their colleagues and supporters to participate in a national day of action to raise awareness about their current working conditions and build support for legislation that will improve them. CWA members, members of other unions including the Service Employees International Union and UNITE HERE, community supporters, elected officials, and other workers participated in rallies and demonstrations at 15 airports across the country including in Dallas, Miami, Charlotte, and Chicago.

The workers, who are fed up with ongoing challenges, took this bold action to demand Congress pass the Good Jobs for Good Airports Act. The bill is the first legislative proposal of its kind that will set national wage and benefit standards for essential airport and airline workers. On Capitol Hill, Democratic members of Congress including Senate Majority Leader Chuck Schumer, Senator Ed Markey (Mass.), Senator Richard Blumenthal (Conn.), Congressman Chuy García (Ill.), and Congresswoman Eleanor Holmes Norton (D.C.) joined union leaders, airport workers, and allies for a live-streamed press conference in front of the U.S. Capitol Building, echoing their demands for better jobs through the passage of the Good Jobs for Good Airports Act.

Other prominent lawmakers and union and community leaders showed their support online while over 7,000 activists, including hundreds of CWAers, sent emails to their representatives in Congress urging them to support the legislation. “Whether you work for an airline or you work for a company like Swissport, we are here to keep O’Hare running. We all deserve good wages and benefits. Keep up the fight,” said CWA Local 4201 member Carolyn Marsalek, an American Airlines customer service agent at Chicago's O’Hare Airport. “It is time to step up. Contact the people that you have elected to office. We need to support the legislation and we need to act immediately,” added Deborah Johnson, President of CWA Local 6001 in Texas. 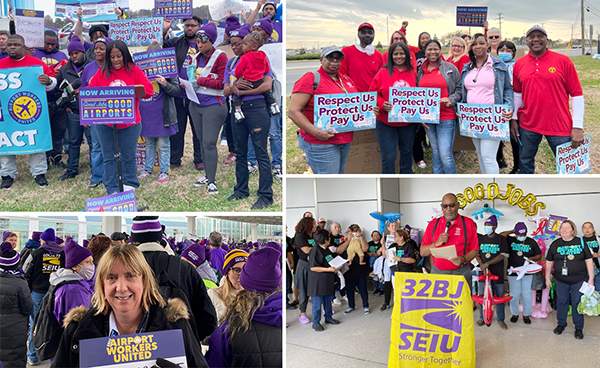 CWA airport workers joined thousands of their colleagues and supporters to participate in a national day of action to raise awareness about their current working conditions and build support for the Good Jobs for Good Airports Act.

The newly signed legislation puts a stop to the harmful, anti-union “One Touch, Make Ready” rule, which allows companies to attach new equipment to utility poles or move existing equipment in a rushed timeframe and without sufficient oversight from utility pole owners. If done improperly, pole attachments can cause facility damage, service interruption, and hazardous circumstances for workers and the public.

The bill couldn’t have come at a more critical time, as the state is investing to expand broadband access to all residents. Earlier this year, CWAers throughout New York held meetings with and sent thousands of emails to their representatives in the New York State Senate and Assembly to advocate for this bill.

Promoting U.S. Manufacturing and Good Jobs Through the CHIPS Act

CWA Local 7026 Secretary-Treasurer Cecilia Valdez represented CWA at an event marking the unveiling of the Taiwan Semiconductor Manufacturing Company’s (TSMC) new $40 billion investment to upgrade its capabilities in Phoenix and build a second facility nearby. President Biden, who has been visiting semiconductor plants since the passage of the CHIPS and Science Act, was in attendance and touted the investment as a product of the legislation. CWA played an instrumental role in the passage of the CHIPS and Science Act, which promotes domestic production of semiconductors and creates good jobs in the United States. IUE-CWA represents workers at onsemi, a semiconductor manufacturer in Mountain Top, Penn., which is currently the only union-represented final assembly semiconductor manufacturing workforce in the United States. Valdez had an opportunity to speak to President Biden and discuss the significance of organizing in the semiconductor and the entire American manufacturing industry.