CWA President Chris Shelton and IUE-CWA President Carl Kennebrew joined President Biden at the White House as he signed the Creating Helpful Incentives to Produce Semiconductors (CHIPS) Act into law. The CHIPS Act promotes domestic production of semiconductors and creates good jobs in the United States. IUE-CWA represents workers at onsemi, a semiconductor manufacturer in Mountain Top, Penn., which is currently the only union-represented final assembly semiconductor manufacturing workforce in the United States. Jane Stein, president of IUE-CWA Local 88177 in Mountain Top, also joined President Shelton and Kennebrew at the White House for the bill signing.

“The signing of the CHIPS Act into law marks a historic win for American workers and will be critical to rebuilding our country’s manufacturing sector and fortifying American supply chains. For too long, the U.S. failed to ambitiously invest in critical chip manufacturing, leaving global trade at the mercy of China’s unfair trade practices. As the only union representing American semiconductor manufacturing and final assembly workers, we understand the need for more investment in U.S. manufacturing and wide-scale competition,” said CWA President Chris Shelton. “This legislation is a significant step towards getting U.S. manufacturing back on the map, while creating sustainable, competitive jobs in the process.”

“I am proud to stand alongside President Biden as he signs into law the CHIPS Act, legislation that will ensure critical investment in semiconductor manufacturing across the country and improve the lives of our country’s essential manufacturing workers,” said IUE-CWA President Carl Kennebrew. “We look forward to continuing to work with the Biden Administration to ensure there are labor protections tied to these federal dollars that will help create good, family-sustaining jobs.” 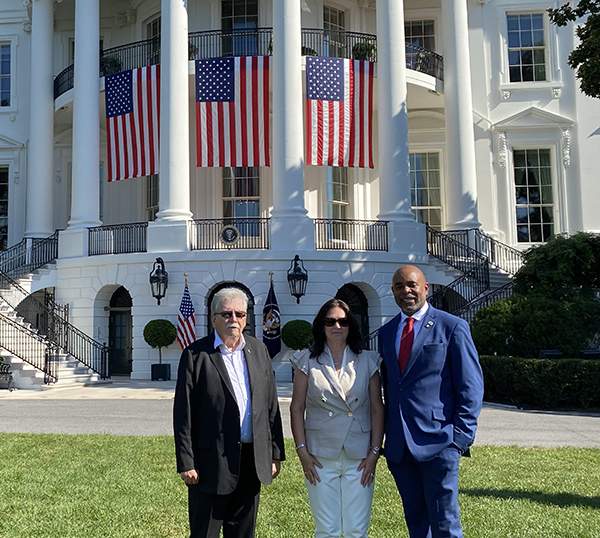 CWA applauds the passage of the Inflation Reduction Act (IRA) by the Senate on Monday. The legislation will improve working people’s lives by lowering the cost of prescription drugs for seniors on Medicare and cap their out-of-pocket expenses for medication. The IRA will extend the Affordable Care Act health insurance subsidies to prevent millions of Americans from seeing substantial increases in health insurance costs. It also invests in our green energy future, creating hundreds of thousands of good, green manufacturing and construction jobs that will lower energy costs and help save our climate.

The Inflation Reduction Act begins to bring more balance to our tax code through a 15% minimum tax on large corporations to ensure that instead of gaming the system to boost profits, they will pay their fair share. It also establishes a one percent tax on stock buybacks, which corporations use to inflate the profits of wealthy shareholders instead of investing in their products and their workers.

These changes are welcome and long overdue, and are only possible because of the persistence of pro-worker legislators and activists, including CWA members, who have been mobilizing to build power and make progress despite the bureaucratic roadblocks.

CWA Government Affairs Director Dan Mauer joined U.S. Secretary of Commerce Gina Raimondo, U.S. Secretary of Labor Marty Walsh, and other labor, business, and nonprofit leaders at a roundtable unveiling the Commerce Department’s new Job Quality Toolkit. As part of the framework to create good jobs and a more accessible workforce, the toolkit encourages employers to remain neutral during union organizing campaigns and provide paid leave, quality and affordable healthcare, and other benefits. During the roundtable, Mauer applauded the launch of the toolkit and highlighted how it pairs well with the Commerce Department’s strong pro-worker rules on broadband deployment, which will protect against low-road employers undercutting the companies that are doing the right thing.

Last week, CWA legislative and political activists from across the country participated in the CWA 2022 Midterm Kick-Off virtual event to plan and strategize CWA’s mobilization for the upcoming midterm elections. CWA President Chris Shelton, District 4 Vice President Linda L. Hinton, and various other CWA local leaders spoke to participants during the event and stressed the importance of electing pro-worker candidates. CWA District 1 Vice President Dennis Trainor, IUE-CWA President Carl Kennebrew, CWA District 7 Vice President Susie McAllister, and CWA Vice President for Public, Healthcare and Education Workers Margaret Cook also participated in the event. In addition, Democratic Congressman from Ohio and CWA-endorsed candidate for U.S. Senate Tim Ryan spoke at the event and encouraged members to continue to mobilize and secure a pro-worker majority in the U.S. Senate. “This election could define the fate of many of our rights,” said Glenda Abicht, CWA Local 3122. “We need pro-labor champions who believe that passing the PRO Act would lift people out of desperate working conditions. That is why we're fighting for them, because they fight for us. We need to get involved in this election, whether that is by joining a phone bank, text bank, or labor walk. This moment calls on us to act,” Abicht added. 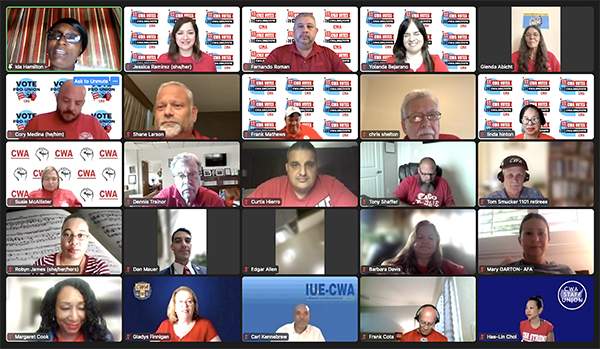 CWA legislative and political activists from across the country participated in the CWA 2022 Midterm Kick-Off virtual event to plan and strategize CWA’s mobilization for the upcoming midterm elections.