The Inflation Reduction Act, introduced in the Senate last week, is a major step toward lowering the cost of living for working families, while creating good jobs across the country and making sure that corporations finally pay their fair share of taxes.

The bill will allow Medicare to negotiate the prices of prescription drugs, saving seniors an average of $800 per year. In addition, it will create thousands of new green energy jobs with strong Buy American protections and provide significant home energy rebate programs so families can make their homes more energy efficient and save money in the process.

The bill funds these programs through a 15% corporate minimum tax and closes the notorious "carried interest" loophole, which allows executives at private equity and hedge funds, who routinely push for job cuts for CWA members, to pay a lower tax rate than anyone else pays for their earned income.

Corporate lobbyists are fighting hard to stop the bill so that executives and wealthy shareholders can continue to boost profits by dodging taxes.

Make sure your Senators hear from you! Click here to tell your Senator to vote yes on the Inflation Reduction Act and support working families.

The CWA Wisconsin State Council endorsed longtime labor champion and CWA ally Lieutenant Governor Mandela Barnes ahead of the primary elections next week. Growing up in a union household, Barnes understands the role organized labor plays in creating a fair economy for all workers. “CWA was one of the major unions to support Barnes’ bid for Lieutenant Governor and we are proud to continue to support him as he fights to represent our interests in Washington. He has always been by our side and our members know he is committed to defending the rights of working people everywhere,” said CWA District 4 Vice President Linda L. Hinton. Barnes has consistently been an advocate for CWA members in the state. Just last month, he participated in a rally organized by CWA to call on lawmakers to vote for the Protecting the Right to Organize (PRO) Act, national legislation that will make it easier for workers to form unions. "It was [my parents'] union membership that gave me the opportunity to stand here in front of you all today as your lieutenant governor, and I will never give up that fight for working people,” said Barnes speaking to workers during the rally.

CWA members in Tennessee have been actively mobilizing to defeat a constitutional amendment that will enshrine so-called "right to work" laws into the state’s constitution in the upcoming election on November 8. Right to work laws force unions to advocate on behalf of workers who haven’t paid their fair share in dues. They are part of the ongoing attempt by big corporations and their political allies to drive down wages and benefits by weakening the power of union workers. CWA activists have partnered with community organizations, other labor unions, and advocacy groups like the Tennessee NAACP, the Tennessee AFL-CIO, the Tennessee chapter of the Delta Sigma Theta Sorority, United Auto Workers, United Steel Workers, and many more to mobilize working families against this harmful amendment. 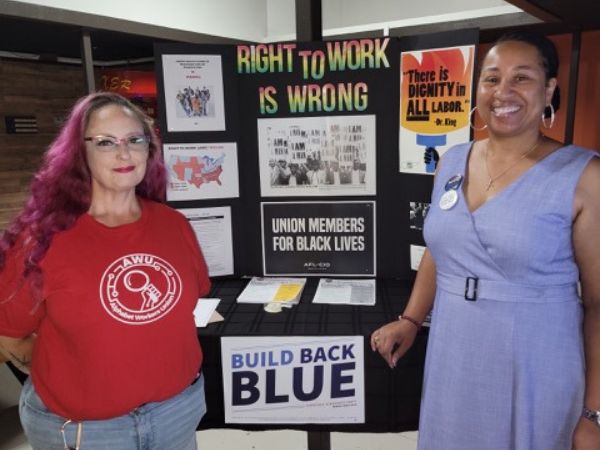 CWA members in Tennessee mobilize to defeat the so-called “right to work” constitutional amendment in the upcoming election.

CWA District 9 leaders and activists from California and Nevada gathered for a virtual town hall last week for a critical discussion with state lawmakers and community leaders on broadband expansion. The participants discussed how they can work together to ensure that federal broadband buildout funds from the bipartisan infrastructure bill are used to support good jobs for CWA members and expand affordable internet access to all communities in their states.