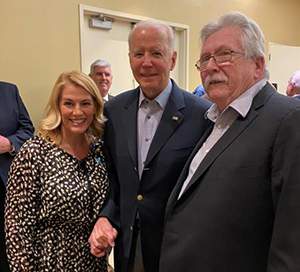 CWA President Chris Shelton and AFA-CWA International President Sara Nelson, along with other labor leaders, joined President Joe Biden on Saturday to discuss Biden's worker-focused agenda and the importance of the upcoming midterm elections. Watch highlights from the event here.

On Monday, Shannon Wait, an organizer with CWA Local 1400's Alphabet Workers Union (AWU-CWA), joined other workers and senior Biden-Harris Administration officials for a virtual roundtable to discuss the real-world effects of the lack of labor market competition. The event also highlighted the Administration’s efforts to promote competition, so that workers can bargain for higher pay and command dignity and respect in the workplace.

Wait, a former data technician at Google contractor Modis, referenced her experience at the data center to explain how giant corporations like Google are harming workers and the economy by increasingly using subcontractors like Modis to hire temporary workers without benefits and protections. Prior to becoming an organizer with AWU-CWA, Shannon was suspended for engaging in union activity. She was reinstated a week later after filing an Unfair Labor Practice complaint, with the support of CWA. In her response to a question from Chair of the Council of Economic Advisors Cecilia Rouse about the restrictions that nondisclosure agreements (NDAs) impose on workers, Wait said, “When I reach out to workers, through Alphabet Workers Union, sometimes they don't want to talk to me because they say, ‘I signed an NDA and that means that I can't talk to you about organizing.’ On the contrary, their rights to organize are protected by the federal government. And, I will not stop until every worker at Google understands that.”

The event was organized to roll out a new Biden-Harris Administration report entitled, “The State of Labor Market Competition in the U.S Economy.” The report cites corporate concentration, increased outsourcing, and the decline in union density as factors that negatively impact workers’ wages and working conditions. The findings will be used to shape initiatives and policy proposals to bolster labor market competition and increase workers’ bargaining power.

In his recent State of the Union address, President Biden said, “Capitalism without competition isn’t capitalism. It’s exploitation.” CWA applauds the President for taking such a strong stance and will continue to support the Administration’s efforts to maximize fair labor market competition.

CWA members in New York have been mobilizing to ensure that state legislators include strong labor standards and a fiber preference for broadband funding in next year’s state budget. Governor Kathy Hochul’s (D-N.Y.) proposed budget includes $1.6 billion in funding for broadband. However, without any labor protections, this money could go to low-road contractors, often from out of state, who rush through jobs and compromise both worker safety and the quality of the networks. Public money should also prioritize fiber-based projects to make sure all New Yorkers, especially those from traditionally underserved communities, get the highest quality internet access. 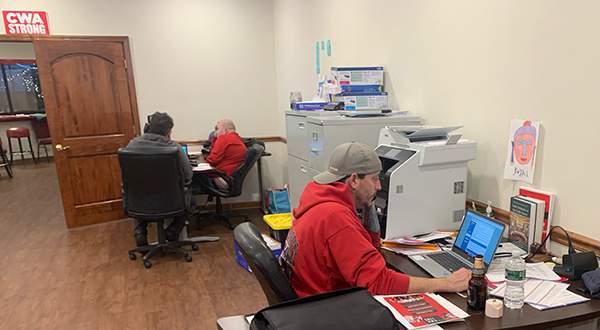 Members of CWA Local 1102 joined members from other locals throughout New York for a phone bank and made hundreds of calls to CWAers throughout the state encouraging them to talk to their legislators about ensuring strong labor protections and equitable broadband buildout.