Last Friday, thanks to the efforts of CWAers, other labor activists, and community allies, Illinois Governor J.B. Pritzker signed HB 106 into law. The bill eliminates an unjust exemption that prevented aviation workers from utilizing sick leave to care for a family member or committed partner, rights that were granted to all other Illinois workers under the Illinois Sick Leave Act of 2017. In recent months, activists have called, emailed, and met with members of the legislature to encourage them to end the unjust exemption of aviation workers. We applaud our champions in the Illinois legislature for fighting for working families.

The Senate has yet to vote on the Build Back Better Act, a nearly $2 trillion, bipartisan spending package that will provide essential support to, and improve the lives of, working families across the country. CWAers will continue to put pressure on the Senate to enact this crucial legislation into law. 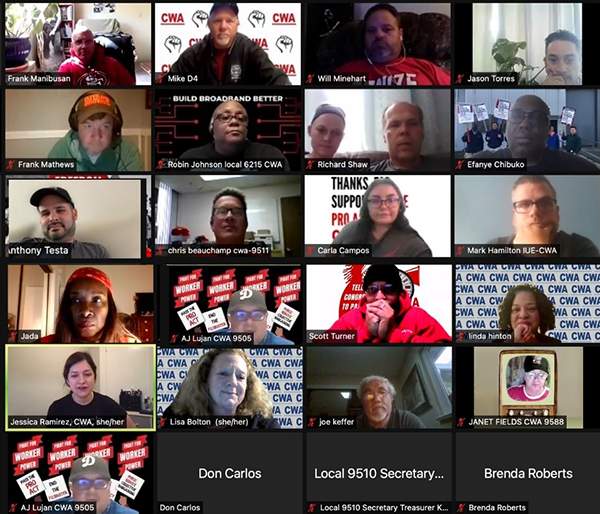 CWA activists participated in a national phone bank to build support for the Build Back Better Act.

The Senate has an opportunity to repair our political system and strengthen our democracy. S.1, The Freedom to Vote Act, is a bold and sweeping reform bill that will make it easier, not harder, to vote and get big money out of our democracy. Today, at 6pm ET/ 5pm CT/ 4pm MT/ 3pm PT, join fellow CWAers for a national phone bank and tell your Senators to support the Freedom to Vote Act. Click here to join the phone bank when it is time.

CWAers across the country have continued to visit Congressional offices to thank their representatives for supporting the Infrastructure Investment and Jobs Act and the Build Back Better Act. Click here to check out the great photos from these visits!

eNewsletter Issue:
Dec 16, 2021 - Save Big on Flowers This Holiday Season and other news