Last Friday, CWA activists in Florida joined other union members and activists to rally in front of Rep. Stephanie Murphy’s (D-Fla.) Orlando office, calling on her to support President Biden’s Build Back Better bill in Congress. The group had an appointment to meet with Rep. Murphy’s staff and deliver a letter asking for the representative's support on the bill. However, upon entering the office building the delegation was stopped by security, the police were called, and Rep. Murphy’s staff refused to meet with the activists. CWA members and the labor movement of Central Florida will continue to engage Representative Murphy on this important bill until she stands with the working people of her district. 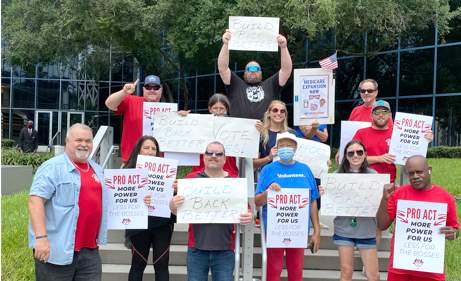 CWA members in Florida rally outside of Rep. Murphy’s office to build support for the Build Back Better Act. 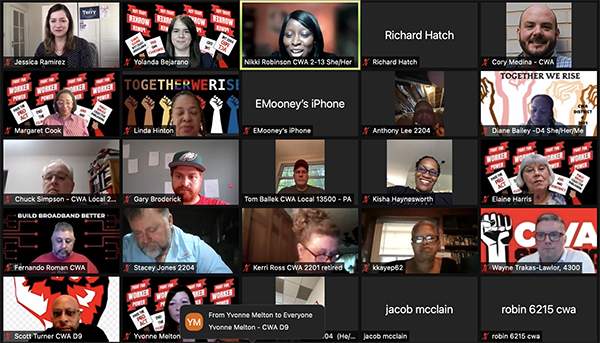 Last Wednesday, almost 40 volunteers, including members of the CWA Executive Board, participated in a national phone bank to encourage voters to support Terry McAuliffe in the upcoming Virginia Gubernatorial election. They made over 2,000 phone calls and reached almost 200 voters, an overwhelming majority of whom made a commitment to support McAuliffe.

CWA Promoting the PRO Act at the Pitchfork Economics Podcast

Last Friday, Shane Larson, CWA Senior Director of Government Affairs and Policy, joined the Pitchfork Economics Podcast, a progressive policy-centered podcast that focuses on power structures and how we break them down in American economics, politics, and public policy. During his interview, Shane explained why right-to-work laws are harmful, how they came to be, and why it’s so important to pass the PRO Act to fight for workers’ rights. Listen to the full interview here.