At Verizon's annual shareholder meeting earlier this month in Orlando, Fla., Jennifer Womack, a Verizon Wireless call center worker in Irving, Texas, took a brave stand to confront Verizon CEO Hans Vestberg and ask him point blank, once and for all: why is Verizon so scared of workers joining a union?

Jennifer detailed the struggles faced by Verizon Wireless workers, including the intense pressure put on them by the company to hit unattainable goals and being thrown into new responsibilities with little or no training.

"Inadequate training, scheduled work days being changed with little notice at all, medical leave not being paid. And then also retaliation. We've had some meetings [with management] about not meeting with the union, not talking to the union, and we feel like we're being harassed and bullied."

Mr. Vestburg responded by noting that, "We're all here to make the company better," and went on to commit that, "Employees have all the right to [join unions]. And of course we are supporting whatever decision you're making."

In addition to Jennifer and other Verizon Wireless workers who attended the meeting, CWA presented a shareholder proposal calling for an independent board chair, highlighting the need for oversight and accountability as the company undertakes risky new business strategies and internal restructuring.

Watch the video of Jennifer confronting the Verizon CEO here. 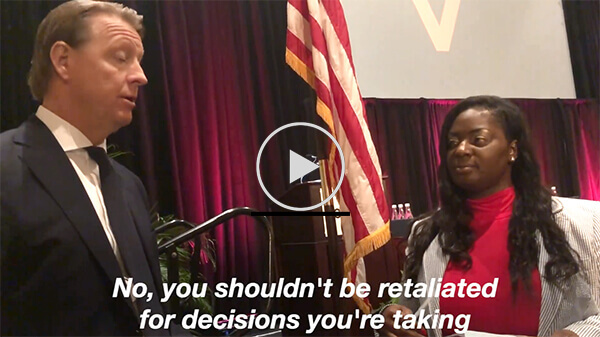