On March 15, the Congressional Progressive Caucus unveiled its budget proposal, "The People's Budget," which levels the playing field and creates economic opportunity for all. Unlike the other plans being introduced this budget season in Washington, this one actually makes sense.

The People's Budget would tax Wall Street speculators and close the tax loopholes that companies use to ship jobs overseas. It would provide debt-free college to every student, invest $1 trillion into repairing the nation's infrastructure, and adequately fund voter protection agencies. This budget would also ensure that workers displaced by job-killing trade deals like the Trans-Pacific Partnership will get the assistance that they need to get back on their feet.

Get all the details here.

At the press conference, CWA President Chris Shelton said, "The federal budget says a lot about what kind of nation we're going to be going forward. The People's Budget is one that we can all be proud of, as it will restore power to working people and begin the path to rebuilding our middle class. For too long, our government has failed to make the investments that we need to ensure a vibrant, growing economy."

Shelton added, "We all know that it's a tough fight to get good ideas like these enacted given the unfair power that big campaign donors have to corrupt the legislative process. And that's why it's so very important that the budget also establishes a system for public financing of elections to end this corrupt system."

The People's Budget is practically the polar opposite of the plan championed by House Republican leaders – and that's why it works. A new economic analysis by the Economic Policy Institute found that, by fighting back against the massive spending cuts championed by conservatives, The People's Budget would actually push unemployment down to 4 percent and increase the gross domestic product (GDP) by 3 percent. That's something all members of Congress should get behind. 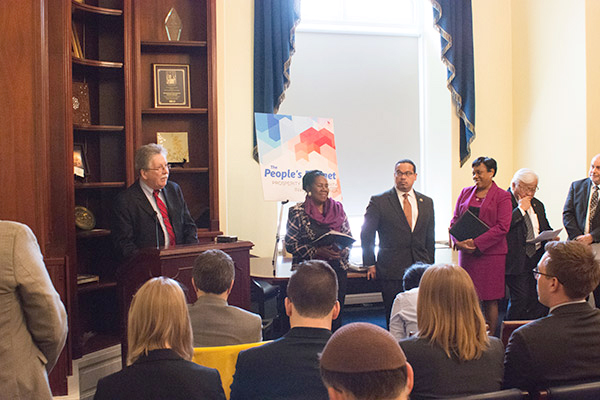 CWA Chris Shelton speaks at a Capitol Hill news conference with members of Congress who have proposed a progressive, "people's budget."