On Thursday, thanks to the tireless work of CWA members and a broad coalition of labor, civil rights, environmental, religious, immigrant rights, and women's groups, the U.S. House passed the Protecting the Right to Organize (PRO) Act, historic legislation to make it easier for workers to join a union.

"The voices of America's working people are finally being heard," said CWA President Chris Shelton. "Members of Congress are starting to understand that the reason our economy has left so many families behind is that corporations have bent labor law to their will. The PRO Act restores balance to our system by putting power in the hands of working people. It will make it much easier for workers to join a union, and crack down on the dirty tricks that companies use to make workers afraid of taking collective action to improve their lives."

Last Wednesday, Jennifer Womack, who has been organizing with her coworkers at a Verizon Wireless call center in Irving, Texas, to join CWA, spoke at a press briefing hosted by House Speaker Nancy Pelosi and House Committee on Education and Labor Chairman Bobby Scott about how the PRO Act would help her and her coworkers.

Speaker Pelosi shared Womack's story during her remarks just prior to the vote on the House floor.

"When Jennifer and her coworkers tried to improve working conditions, she was subjected to humiliating retaliation and forced to attend anti-union trainings designed to scare her off," Pelosi said. "She told us, 'I believe the decision to join a union should be up to me and other workers, without having to face threats and retaliation.' Democrats agree."

The PRO Act now awaits action by the Senate, where Republican Senate Majority leader Mitch McConnell has failed to move the bill forward. The Trump administration has indicated that the President would veto the bill. 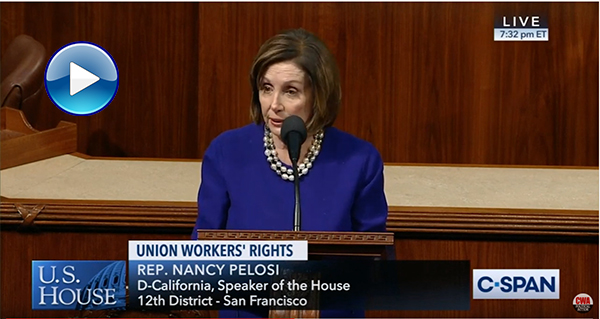