Angela Melvin, a T-Mobile US call center worker from Wichita, Kan., and a leader in the new TU-CWA Local 6547, urged Deutsche Telekom shareholders to crack down on its American subsidiary's flagrant disrespect for U.S. labor law. 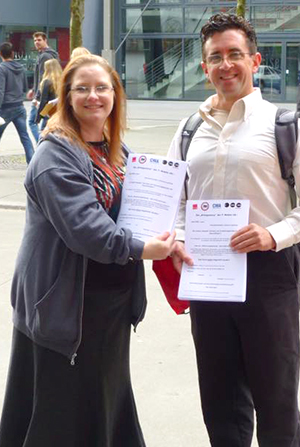 Deutsche Telekom is the parent company of T-Mobile and T-Mobile US.

"Dear shareholders, please support us in our demand for respect and fairness," she said, speaking at the annual meeting in Cologne, Germany. "I think that we have earned this and that you will also profit from it."

Melvin called out Deutsche Telekom's two-faced treatment of its workforce. In Germany, the company recognizes and respects workers' right to a union voice. Yet in the U.S., Deutsche Telekom allows T-Mobile US managers to harass and intimidate employees – even after the National Labor Relations Board found the company guilty of engaging in nationwide labor law violations.

Before the annual meeting they sat down with leaders of the 2 million-member German union ver.di, which represents workers at Deutsche Telekom and has been a key partner in building TU. The TU activists were also able to meet with workers at a T-Mobile store in Cologne, as well as call center workers in Dusseldorf.