It’s hard to believe it’s election season again! The 2022 midterms are just 5 months away, and CWA members in every state are getting ready for tough contests at the local, state, and national levels. Sometimes, we all wonder if we can really make a difference with our phone banking, door knocking, and Get Out the Vote efforts. Last year, I talked to one of our Next Gen mentors who took bold, creative action in the 2020 election in his home state of Arizona. We’re reposting that interview here to inspire you to take action in any way you can—you will make a difference!

In August 2020 Rasean Clayton, a US Navy veteran and member of CWA Local 7050, heard that Kanye West was trying to get on the presidential election ballot in Rasean’s home state of Arizona. Kanye, the singer and music producer, was someone Rasean had admired, but Kanye, the politician? Kanye, the president? That didn’t really make sense. What was going on in Arizona?

Rasean did what most of us talk about, but we rarely do: He set some wheels in motion to fix the problem he saw right in front of him. Here’s an edited version of our conversation.

Carissa: How did you first learn that Kanye West was trying to get on the ballot in Arizona? What were your initial thoughts about it?

Rasean: I think I saw the announcement on Twitter and then on TV. At first, I thought it was a joke. I thought it was a stunt to drum up album sales. But I did some research and learned that Kanye was an avid Trump supporter. It dawned on me that this actually might be another way to mess with the election numbers. If West got on the ballot, he was so popular as a celebrity that some people would have voted for him just for fun, not because they really wanted him to be president.

Carissa: In August 2020, you filed a lawsuit to keep Kanye from appearing on the November 2020 presidential ballot as an Independent because he was actually a registered Republican in another state. But you soon discovered you were in a race against the clock because the deadline for printing ballots was in early September. What pushed you to say, “I’m the person who needs to take this problem on!”?

Rasean: I’ve been paying attention to politics for a long time. When I turned 18, the first election I voted in was in 2000. It was the Bush versus Gore election. I was so excited to go to the polls. That was the election where Gore won the popular vote, but the electoral college was a tie, and they ended up recounting all the ballots in Florida.

Now, there’s nothing wrong with losing, but I hated that there was a shroud of controversy. When I thought about all the people in 2020 who were voting for the first time, I didn’t want them to have a similar experience. I didn’t want West to rob a lot of people of their first votes by creating a controversial election in Arizona. I didn’t want the election to end up in another big recount. Unfortunately, that happened anyway! 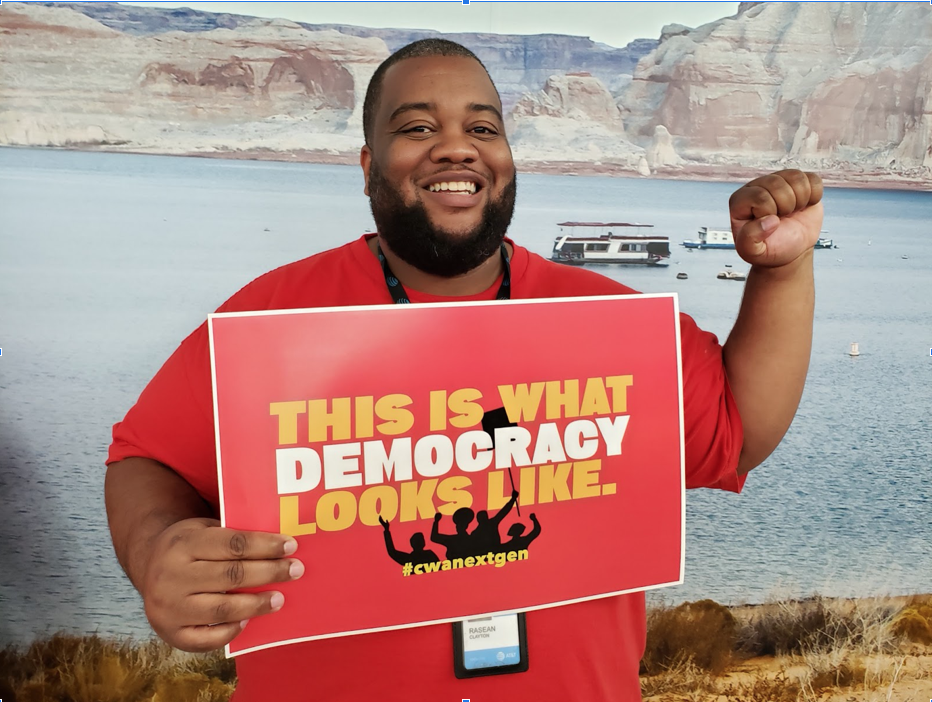 Carissa: It sure did! When you decided to do something about West on the ballot, how did the process work?

Rasean: It all happened fast. I worked on a statement with some lawyers. We filed the statement with the Board of Elections and won. Kanye then appealed and lost again.

And that was it—he was off the ballot. I laugh sometimes when I think about it. Me, an average Joe, a working citizen—I can’t believe I fought against one of the superstars of our time, and won—twice! It shows that if you believe in something enough, and you fight for it—if you say that this is not fair and it should stop, you can win. If you decide you’re fed up and won’t tolerate certain things, you can make a policy change—a real change. You’ve got to believe. And then fight for what you believe in.”

We have to keep fighting. Until we get our piece of the pie and we can take care of our families with one salary. Until everyone is treated equally. Until the rules apply to everyone equally. We have a lot of fighting to do.