In an op-ed in Aviation Weekly, CWA President Chris Shelton asked, "What's the point of an 'Open Skies' agreement if partner countries can routinely violate the rules and put the jobs of U.S. airline workers at risk?"

He's right, and that's why the leaders of unions representing pilots, Flight Attendants and airline workers have come together with the heads of American Airlines, Delta Air Lines and United Airlines, calling for the Obama administration to stop the massive subsidization of the Gulf States carriers by the governments of the United Arab Emirates and Qatar.

The Department of Transportation says we need "Open Skies" to promote "unrestricted, fair competition to determine the variety, quality and price of air service." Unfortunately, the Gulf state carriers have been flouting "Open Skies" rules for years.

In a little over a year, the Gulf carriers have announced plans to dramatically expand service to and from the U.S., increasing their daily seats by over 35 percent. This is just the beginning. Cities across the country are experiencing significant declines in bookings on U.S. carriers and their joint venture partners on international routes following the entry of the Gulf carriers into their markets: 21.4 percent in Seattle; 14.3 percent in Washington, D.C.; 13.3 percent in Orlando; 13.1 percent in San Francisco; 10.8 percent in Boston; 8.8 percent in Chicago, and 7.6 percent in Dallas-Fort Worth.

Why does this matter?

When U.S. carriers lose passengers, they are forced to cut back or cut service to international destinations, and they also lose the international passengers that help fill domestic flights. Fewer flights mean fewer jobs for pilots, Flight Attendants, passenger agents and airport workers, as well as lower revenue for airports and less customer demand for related services.

United and Delta Airlines already have canceled service from the U.S. to Dubai, citing in part the unfair competition by the Gulf carriers. Economists estimate that more than 1,500 American jobs are lost when a U.S. carrier's route is taken over by a Gulf airline because the system allows them to operate at an unfair advantage."

That's why it's time for the Obama administration to enforce the existing Open Skies agreements with the UAE and Qatar, stop the unprecedented flow of subsidies once and for all and make sure that all agreement partners follow the rules. Our government must deal with the Gulf carrier subsidies now, before more American jobs are lost and more communities are damaged. 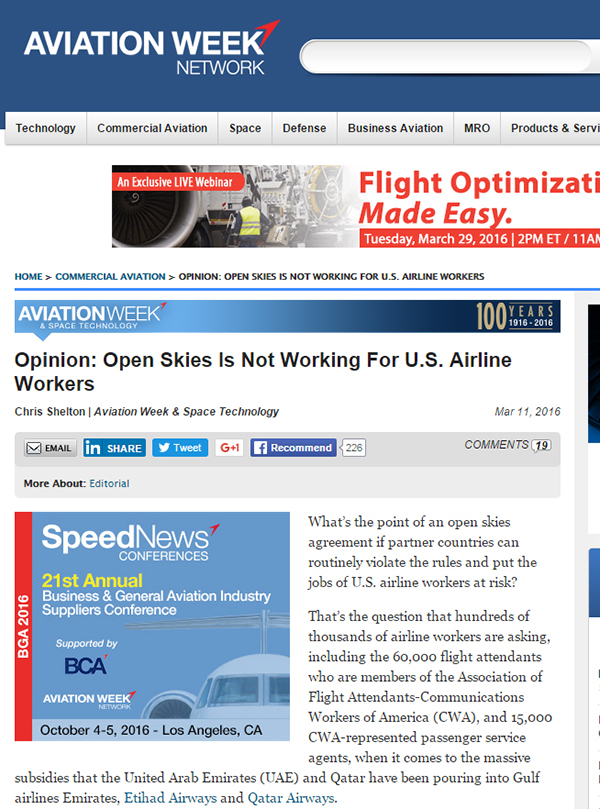