Today, the Communications Workers of America (CWA) and three workers filed a class action lawsuit against T-Mobile US, Amazon.com, Inc. (Amazon), Cox Communications and Media Group (Cox), and hundreds of other large employers and employment agencies who allegedly engaged in the unlawful practice of excluding older workers from receiving job ads on Facebook for open positions at their companies. The lawsuit, which challenges how Facebook’s paid ad platform is allegedly being used to hide job ads and opportunities from older workers nationally, has been filed in the U.S. District Court for the Northern District of California.

The case comes several days after the 50th anniversary of Congress passing the Age Discrimination in Employment Act (ADEA), which prohibited age discrimination in employment nationwide, raised public awareness of this widespread problem, and inspired state and local governments to enact similar legislation.

In the Complaint, CWA and the workers allege that, through an in-depth investigation, they have discovered that hundreds of employers and employment agencies are illegally targeting their employment ads on Facebook to exclude older workers who fall outside specified age ranges (such as ages 18 to 40, or ages 22 to 45), purposely preventing these older workers from seeing the ads or pursuing job opportunities. The Complaint alleges that this practice constitutes a violation of federal, state, and local laws that bar age discrimination in employment advertising, recruiting, and hiring. 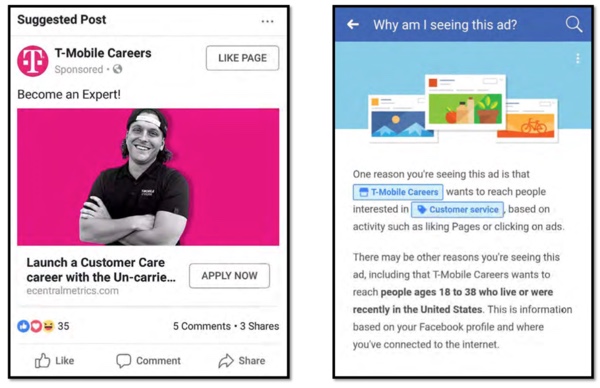 The Plaintiffs aim to represent millions of job seekers, age 40 and older, who have been denied the ability to even learn of potential job openings. The defendants are large employers and employment agencies in a variety of industries including technology, entertainment, retail, health care, energy, real estate, staffing firms and agencies, and others.

Plaintiff Lura Callahan, 67, and Plaintiff Linda Maxwell Bradley, 45, are former call center workers with extensive experience in the telecommunications industry and other fields. Plaintiff Maurice Anscombe, 57, is a former cable technician and law enforcement officer. All three Plaintiffs are recently unemployed workers who use Facebook and other websites to search for work, but have allegedly been denied the opportunity to receive employment ads on Facebook due to their age.

CWA represents 700,000 workers across the United States, Canada, and Puerto Rico. In recent weeks, CWA made headlines with its call for major employers to promise $4,000 raises for every employee if the corporate tax cut bill passes, as the bill’s proponents have claimed employers would do. This lawsuit is CWA’s latest effort to fight for workers’ rights, job opportunities, and bargaining power across the country.

The Plaintiffs are represented by Outten & Golden LLP, an employment and civil rights law firm with 60-plus attorneys and offices in New York, Washington, DC, San Francisco, and Chicago. The lawyers on this case include: David Lopez, who served as the General Counsel of the Equal Employment Opportunity Commission from 2010 to 2016; Adam Klein, the head of the firm’s Class Action Practice Group; and Peter Romer-Friedman, who served as labor counsel to former Senate Labor Committee Chairman Edward M. Kennedy, a co-sponsor of the ADEA.

“Today, the primary way workers find out about job openings is online, including by getting job ads on Facebook. It’s not right if people my age are deliberately screened out, and I don’t even get the chance to hear about jobs that I know I have the skills to do,” Plaintiff Linda Bradley said.

“Living in Ohio, it’s hard to find a good job that pays a living wage. I’m upset that so many companies are blocking me and other workers from even learning about job opportunities,” said Plaintiff Lura Callahan.

“In decades as a civil rights lawyer, I have never seen job ads like these that expressly target young workers and exclude older workers. The law requires equal opportunity in advertising, recruiting, and hiring,” said David Lopez of Outten & Golden.

“It’s illegal and immoral to exclude older workers from receiving a company’s job ads,” added Peter Romer-Friedman of Outten & Golden. “This harmful practice must stop today. We are hopeful that this class action will end systemic age discrimination in online job recruiting.”

A year ago, an investigation by the news organization ProPublica found that Facebook’s platform made it possible for African Americans, Latinos, and Asian Americans to be excluded from receiving ads for various economic opportunities, including housing and employment ads.

In the Complaint filed today, CWA and the workers have alleged that Facebook continues to profit from employment discrimination by helping employers and employment agencies to unlawfully exclude older workers from receiving job ads and information.

CWA, the workers, and their attorneys are asking the Court to: