Protecting Our Democracy and Ending the Filibuster

On Wednesday, in the latest of a series of protests, CWAers, coalition partners, and other activists rallied in front of the White House to demand action on voting rights.

The recent surge in anti-voter laws emerging from state legislatures around the country is a full fledged attack on our democracy and the freedom to vote. The Biden Administration must step up its commitment to voters and work with the Senate to secure the votes necessary to pass meaningful voting rights legislation.

To demonstrate the significance of this issue, several activists at the protest, including CWA Secretary-Treasurer Sara Steffens, CWA District 6 Vice President Claude Cummings, Jr., and PHEW-CWA Vice President Margaret Cook, participated in civil disobedience by getting arrested. Last month, delegates to the 78th CWA Convention voted overwhelmingly to pass a resolution to end the filibuster and save our democracy. We will continue to show up at the White House, in the halls of Congress, and take to the streets to make our voices heard and fight to ensure all Americans have the freedom to vote. 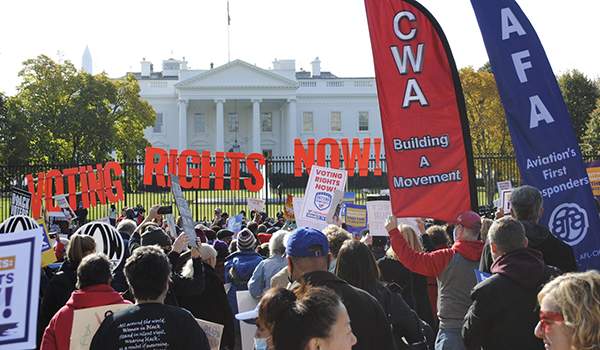