CWA members from across the country met this week in Washington, D.C., for the 2022 CWA Legislative and Political Conference. During the two-day conference, attendees heard from CWA leaders, political powerhouses, and other guest speakers. This year’s conference focused on CWA’s efforts to secure legislative and political gains that protect our members’ rights and promote worker organizing.

CWA President Chris Shelton, who, at the CWA President’s Meeting held a day prior, announced the historic neutrality agreement with Microsoft, delivered a keynote address on the first day of the conference. He highlighted the resilience CWA members have shown throughout the COVID-19 pandemic. “Despite all of the obstacles put in our way, despite all of the crises we have faced and the losses we have suffered, we have continued over the last two years to be CWA STRONG,” he said.

Shelton praised President Biden for staying true to his commitment to workers. “Without a doubt, Joe Biden is the most pro-labor President in my long, long career in the labor movement.” From protecting workers’ right to organize and promoting worker organizing, to raising wages and standards for workers, and advancing landmark legislation with unprecedented labor rights protections, Shelton reviewed what CWA members and the labor movement as a whole have achieved by working closely with the Biden Administration. He also highlighted CWA’s organizing wins and referenced the surge of worker resistance happening across the country. Shelton added, “The entire labor movement must focus all its energy and resources on organizing the unorganized to capitalize on this moment and expand the ranks of labor.” 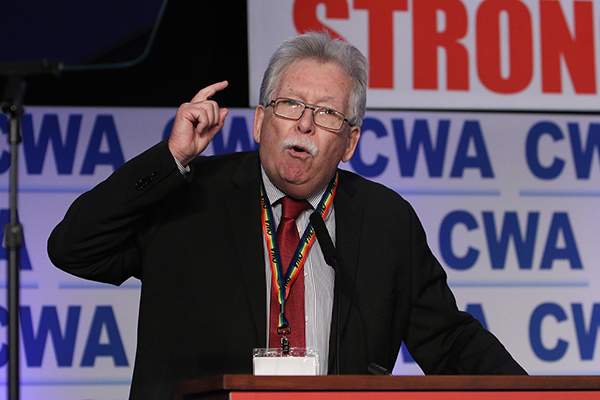 CWA President Chris Shelton delivered a keynote address on the first day of the conference.

CWA Secretary Treasurer Sara Steffens led a powerful panel discussion with CWA women who hold elected office. The women shared moving stories about how they got inspired to serve and the various challenges women face as public officials, and they urged other women to get involved in politics.

Following the panel, House Speaker Nancy Pelosi addressed the conference attendees and stressed the need to keep the labor movement strong by ensuring that every worker who wants to join a union has the chance to join one. Pelosi also commended CWA’s active involvement in advancing key legislation that benefits working people from the Bipartisan Infrastructure bill to the American Rescue Plan, the PRO Act, U.S. Call Center Worker and Consumer Protection Act, America COMPETES Act, and more. “President Biden and the Congress proudly delivered $65 billion to build out our broadband infrastructure. Thanks to your advocacy, this funding also includes unprecedented labor standards prioritizing high-quality, union workers and ensuring safer working conditions,” said Speaker Pelosi.

Former Secretary of Labor and current Maryland Gubernatorial Candidate Tom Perez, who played a key role in CWA’s victory during the 2016 strike at Verizon, gave an impassioned speech about how elected representatives can strengthen organized labor by uplifting all workers. Senator Sherrod Brown (D-Ohio) and Representatives Hakeem Jeffries (D-N.Y.), Ruben Gallego (D-Ariz.), and Al Green (D-Texas) talked about what the union movement means to them and their commitment to protect workers’ rights and our democracy.

A panel of CWA’s Broadband Brigade members discussed the work our members’ are doing to secure good union jobs and high speed internet connectivity for all communities.

On the second day, U.S. Labor Secretary Marty Walsh delivered a rousing speech focused on the Administration’s priorities to support workers who are facing challenges from anti-worker employers, to rising inflation, climate change, and more. During his remarks, Secretary Walsh, who is the first union member to become labor secretary in more than four decades, announced the launch of a new U.S. Department of Labor worker organizing resource website to help workers, especially young workers, get the information they need to form a union.

During their remarks, Senator Bob Casey (D-Pa) and Representatives Ruben Gallego (D-Ariz.), Chuy Garcia (D-Ill.), and Ro Khanna (D-Calif.) pledged to continue their work in Congress to stand in solidarity with, and advance the interests of, working people. White House Senior Advisor for Infrastructure Mitch Landrieu reiterated the Biden Administration's commitment to work closely with CWA to bring high speed internet to every household in America using experienced union labor.

Representative Susan Wild (D-Pa.), who introduced legislation to protect the rights of Filipino workers, participated in a panel moderated by CWA District 4 Vice President Linda L. Hinton on call center workers fighting back against the targeted oppression of union organizers. The panel, promoting international solidarity with workers, featured two call center workers from the Philippines who faced retaliation for organizing to form a union.

In addition, a panel entitled “Building Skills to Win'' featured a group of CWA political activists who are actively engaged in our efforts to build independent political power. CWAers at the conference met with elected officials on Capitol Hill, wrote postcards in support of Tom Perez’s campaign for Governor in Maryland, and had an opportunity to hone their communication skills.

Video from the conference will be added to the playlist at cwa.org/2022-lp-conference-video as it becomes available.

You can also check out the conference photo gallery here.