"Thanks to the hard work and the dedication of CWA members and organizers, employees at the DirecTV call center in Huntsville are now represented by CWA," said CWA District 3 Vice President Richard Honeycutt. "Lots of people worked on the campaign and did amazing work. CWA Local 3905 President David Betz played a big role in the effort, and I am proud of him and everyone who made this happen," he said.

This victory wouldn't have been possible without the incredible work of Betz and Local 3905's members and leadership, and a determined inside committee. CWA District 3's assistant to the vice president, Nick Hawkins, and Tracy Binkley, CWA campaign lead, also worked closely with the Local to make it all come together.

DirecTV is owned by AT&T. The management neutrality and card check provisions that CWA bargained with AT&T are the reason that workers can make a fair choice about union representation.

Betz said the "fast and furious" organizing drive lasted just eight days. The group worked from 6 a.m. to midnight each day to make sure every employee had the opportunity to discuss joining CWA. There was a tremendous response from DirecTV workers, who take calls from customers around the country. Concerns included favoritism in the workplace and miscommunication about the company's policies.

Danielle Turner-Myricks, who works at the call center, said, "I feel happy to be protected by our union at DirecTV."

Princess Pettigrew, another worker, said, "I have never been a part of a union, I'm excited to have one now! Somebody has got our back at work." 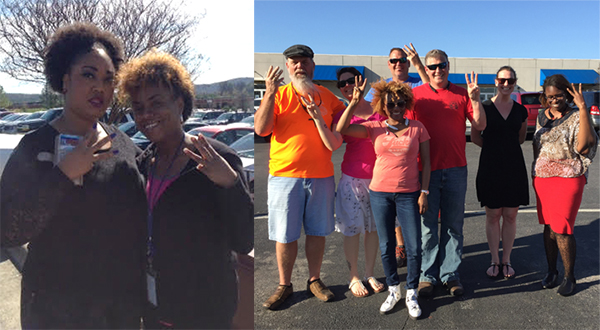 Left: Danielle Turner-Myricks and Princess Pettigrew celebrate their CWA organizing win. Right: Workers at the DirecTV call center in Huntsville, Ala., are the first in the country to say "Union Yes."