Workers at the Verizon Wireless store in Oswego, Ill., unanimously signed cards in favor of forming a union with CWA and have filed an election petition with the National Labor Relations Board (NLRB). The workers are looking forward to participating in the NLRB election on November 18 and continue to stand firm in their commitment to form a union and collectively work to implement better working conditions, including respect, fair compensation, adequate staffing levels, a safe work environment, and benefits. This group of workers, who have been dealing with poor working conditions including understaffing and unlivable wages, is the latest to join the national wave of union organizing at Verizon retail stores. The company has responded to the workers’ organizing efforts with an onslaught of aggressive union busting tactics, including retaliation by senior management against workers seeking to form a union.

This week, in a tremendous victory for Verizon Wireless workers, the NLRB issued a complaint alleging the company violated the law by illegally firing Jesse Mason, a former Specialist at Verizon Wireless’ Seattle Northgate and Aurora Village retail store locations, for engaging in union activity earlier this year. The NLRB is asking the company to reinstate Mason, provide him with compensation for lost wages and consequential damages, and issue a letter of apology for terminating his employment in an act of retaliation.

“The feeling of walking back in after being illegally fired will be amazing. Workers have rights, including the right to organize, and this will show Verizon and every other union-busting mega-corporation that their illegal actions have consequences,” said Mason. Read more here. 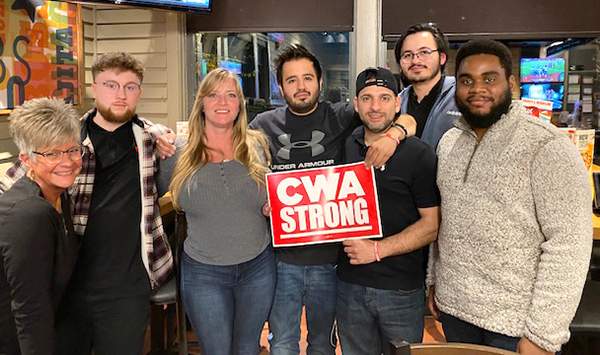 Workers at Verizon Wireless store in Oswego, Ill., unanimously signed cards in favor of forming a union with CWA and have filed an election petition with the National Labor Relations Board (NLRB).

Workers at McKay’s Books Inc. in Knoxville, Tenn., have overwhelmingly voted to join the McKay's Knoxville Workers Union (CWA Local 3805) in an NLRB election. Fed up by the failure of McKay’s owners to recognize the value of their contributions, the workers have been organizing for dignity, respect, and a voice on the job. Recently, they held a rally with community members and allies to build solidarity and support ahead of the vote count for their union representation election. For decades, the workers have served readers and hobbyists in the community by providing excellent service to customers and ensuring McKay’s reputation as a beloved institution providing access to a wide variety of affordable second-hand books and other forms of entertainment. Unfortunately, this has come at a cost for the workers who are overworked, underpaid, and mistreated. Following their union election win, the workers are gearing up to negotiate a fair contract and resolve the challenges that have made their jobs difficult.