A new video from More Perfect Union highlights the challenges that workers at Wells Fargo are facing in the workplace and why they are forming a union with CWA to address them. The video features workers who are organizing as Wells Fargo United, a campaign with the Committee for Better Banks-CWA. “The main four issues to summarize that we see at Wells Fargo are transparency as it relates to pay, safety as it relates to our physical safety or COVID based safety, equal application and adherence to policies and procedures, and then finally, the diversity and inclusion issues that we’ve heard so much about recently in the press,” says Wells Fargo employee Jesse McCool in the video.

Last year, CWA Local 7901 and Local 9412 members at Beneficial State Bank successfully won the first union contract in the banking industry in 40 years. The workers at Wells Fargo hope to build on that win and organize to form a union and negotiate a contract that protects their interests as well as the interests of their consumers. They have created a petition to help build support for their campaign and put pressure on Wells Fargo to refrain from union-busting tactics against Wells Fargo workers. Click here to sign the petition. 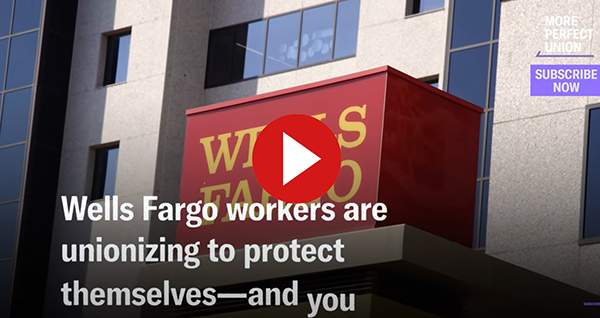 Workers at United We Dream (UWD), the largest immigrant youth-led network in the country, won voluntary recognition after a majority of eligible staff showed their support for union representation with CWA. “We’re so proud to win our new union today and join CWA. My coworkers and I started organizing because we believe all workers should have a seat at the table. These efforts have been led by and for immigrant workers of all backgrounds. This is a victory not just for us as UWD employees but for the entire labor and immigrant rights movements,” said Anto Chávez, UWD employee and a leader on the union organizing committee. The workers look forward to bargaining their first contract.